Why not include the Cricks-Watson, sugar edge and other info in our depiction of the stacks and loops in the EteRNA game as in the picture below which demonstrates the subtleties of 3D structure that happen with two very similar stacks?

This type representation would at least allow us to know we were making stacks that should be 3D similar because the indicating square, triangles, etc. in the diagram are identical. 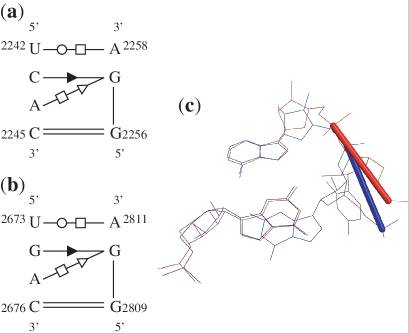 It would be only useful in combination with something that can reliably (well, at least a reliability similar to that of current MFE predictors) predict non-canonical base pairs. Do you know any such predictor? I’d be interested.

Not sure how reliable the software is, but the isosteric matrices are way cool.

Abstract only for ISFOLD which works as above:
http://www.ncbi.nlm.nih.gov/pubmed/18…

ISFOLD: Structure Prediction of Base Pairs in Non-Helical RNA Motifs from Isostericity Signatures in Their Sequence Alignments

Uses sequence alignments and secondary structureboth of which we generate or already have. So, it could be run on eterna data to help with inner loops, hairpins, reactive sites that are non-Watson-Crick.