It seems so. I have a hunch that some bad code was pushed in preparation for the new HTML chat launch. I’m looking into it now.

Update: Seems like a Flash update released yesterday is the cause. Looking into what our options are.

It appears that this issue is also impacting the game itself on some browsers. I’m assuming someone on the team will be contacting Adobe to get this resolved.

Indeed, nothing was changed on our end of things, it’s an Adobe update, which was automatically pushed on most browsers.

At this point, I don’t even know if I can do something about it (like a work-around perhaps), or if it’s all in Adobe’s hands… 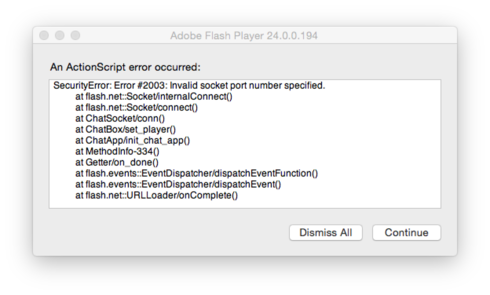 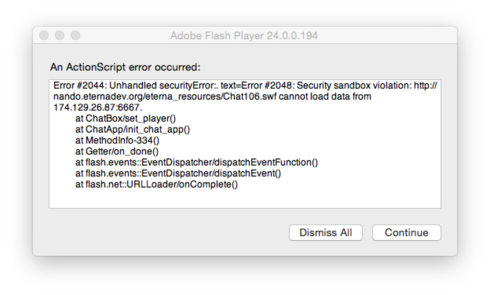 I still don’t know where it comes from… At minimum, I’m going to work on a patch that allows everyone to play and participate in labs.

A good news and a bad one: I finally have found a workaround, but it’s a somewhat complicated one, and not completely satisfactory (specially for new players). I need a break though (been on it for 6 hours straight), so I’ll post about my findings in a couple hours.

Thanks for your hard work Nando!

The drawback here is that this is quite cumbersome, in particular for new players… On the other hand, the in-game chat instance is disabled by default, and we should have a new HTML5-based chat client+server soon-ish, right?

Finally, for the curious ones, what apparently happened: a couple weeks ago, a bug was reported to Adobe, with symptoms eerily similar to our current ones. The build was 24.0.0.186 though (which was working fine for us, thank you very much Adobe). The details are at https://tracker.adobe.com/#/view/FP-4198184

Adobe acknowledged the issue and they went on to push out a “patch” a couple days ago, which fixed things for the other guys, but screwed us quite badly. I guess they managed to shoot themselves in the foot and stop themselves from querying whether they were allowed to connect to a server by blocking access to so-called privileged TCP ports, which is exactly what they need in order to ask the question in the first place… (picture me smashing my head on my desk)

I ended up trying the trick that they suggested in that thread, and it worked. Given that Adobe might fix their fix some day, and that we’re moving to a different implementation anyway, I’d like to suggest that players use this trick for the time being.

Before going further, I saw something in that ticket about using a policy file of some sort on the server. Would that resolve the issue (also, see one of the newer tickets as well, have to leave right now or I’d go find it)

There is, and there has always been policy files on the server. There is even a special daemon written by Adobe, running on the chat server. With the 24.0.0.194 build, the Flash runtime isn’t requesting this file at this special place anymore, for some unknown reason. It was doing so before (builds 24.0.0.186 and earlier), and will do so if you apply my trick.

Could I recommend as a quick fix that the IRC server and client to be switched to a port that is not on the new list of blocked ports? Even with the chat off by default, I’d want to see a banner in both builder-chat and the /game pages that inform of the issue and the fix, which is not ideal at any rate.

As far as HTML-Chat, there’s still some final issues that need to be resolved that have drawn things out a couple more weeks than I had hoped. The idea is to get everything running before the end of the month. I could get it done quicker, but I have schoolwork to contend with, unless Vineet is able to completely take over the implementation of what needs to be done yet.

(edit: that confirms it, Adobe devs are really dense, cause this is just sooo stoopid!)

Quick update: the server already listens to 2 other ports, but these are blocked by a firewall, probably managed by Amazon. Looking into it…

Ok, all moved to a different port, chat should be back online now.

I’m using a mac with chrome broswer. My Adobe Flash is 24.0.0.194…
I can get the site HTML but not the chat.  At the bottom of the chat area, the “open chat window” link can be seen.  If I click on it, everything turns blue where the chat window would be. I can exit chrome and when I open chrome again it shows the web page again with the chat area blank and the chat window link showing again.

@whbob, you’ll probably need to flush your browser’s cache.  On Chrome, hold down the shift key and click on the reload page icon.

@Omei: Thanks, that did it

Working like a charm after a browser refresh. Thanks!

Had logged out of eterna for a few hours.  Logging back in, I had to reload chrome again (with the cursor in the flash area, hold down shift key and right click to bring up a popup menu. select reload) because chat kept flashing “connecting” but never connecting.