This started as an idea in chat. The answers and questions easily drown among the many comments on the news and blog post on the topic.

So here is a forum post for questions and answers on the 3D game.

Your questions or answers will help with making the game better.

I’m seeing an overlap of the endpoint base structure with the placed motif’s connecting base, which is visually confusing.

I’m not sure whether this is on purpose or not!

I noticed this also, and my first impression is that it was a bug. But I think I understand now why they do it this way.

All the motifs start and end with paired bases. If the backbones for paired bases all had exactly the same shape, then you could easily predict how two motifs would join - the backbone endpoints would always line up in a unique way.

But in reality, each backbone unit has six degrees of freedom, and can take on a tremendous variety of shapes. Base pairing enforces more uniformity in backbone configuration than exists for unpaired bases, but still the backbone endpoints for adjoining motifs may not be close to matching up. Rather than grossly tweaking the position of a couple of backbone molecules into energetic unrealistic positions, the game attempts to predicted the alignments where motifs join by smoothing the discrepancies out over an entire pair of bases.

As an example, if you have colors turned on and you add a single helical base pair, you’ll see that two white base pairs, not one, appear, 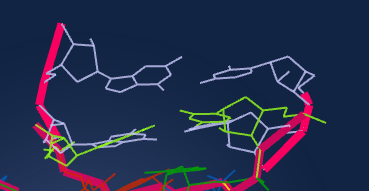 If you look at the length statistics, though, you’ll see that it says only one base pair has been added.

I interpret the overlapping pairs to be indicating that the predicted length and direction of the backbone there is some compromise between the two.

Does that make sense? If it doesn’t, it may be because I am just wrong.