Not listed in the in-game ranking?

My goodness! Just completed L-myc IRES - difficulty Level 4, and paired with 78 GU pairs. But the only four people having similar or higher pairing are: Ding, Samagundi, Benjamin Callaway, and aldo. After aldo, AlexVictor is listed (76 pairs). Why am I omitted from the in-game list? I have yet to leave the game, so I might get listed when leaving the game, but I think that I should be accredited with having a better solution than, say - AlexVictor?

I think the GU competition rankings are still a bit buggy (see for instance this post: http://getsatisfaction.com/eternagame…).

We are very sorry that happened - Was it only the on-game list that didn’t show your name? or was it the puzzle webpage? Can you tell us which platform and browser you are using?

Also, your design with 78 GU pairs is indeed recorded on our server - so oon’t worry about your submission getting lost!

The in-game leaderboard (the one you get when you click on the icon with the two sheet of paper) will be updated in real time.
The Top10 and Top3 rankings on the puzzle pages are updating only every ten minutes.

I use Chrome in an “Incognito Window” whilst playing, but as stated before, I used to get immediate feedback rankwise 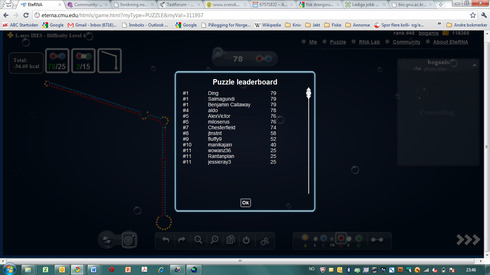 @ Jeehyung Lee: Oops! You mentioned platforms, I use Windows 7 Professional

I can see in your screenshot that you are not connected to the chat as well. Maybe you lost your connection to the site?

Nope, the chat has never worked in “incognito mode” in Chrome.

Sort of a lonely mindgame for me, Madde. Would have loved to chit-chat with others, but whilst in incognito-mode: I get lonely

By the way, I would like some help through the on-coming puzzles how I, as a lonely (blind seeker), could be able to solve something like Prevotella Albensis (did you masterminds in the dev. team [none of your beta testers have it on their scoreboard] ever solve the folding of this, one, puzzle? I’m halfway out of my mind!). There’s no use wanting to join a group of players unless I can communicate with a group of players

(If they can chat, and I can’t, what’s the use?) So - how am I ever going to solve this puzzle, and similar unaided (read: through teamwork)?