I will like to start a page that specifically collects bugs and problems related to the new user interface.

Are some of the game functions broken?

This page is meant as a help to collect current problems so we can get them identified as fast as possible.

The biggest problem I have encountered so far is that the slider to the right side of the screen means I will have to scroll down each time I want to use the bottom slider. I will like the Lab picture to fit the screen. As is this gives a lot of extra moving around and extra clicking.

I can’t see the bottom of the datafield, unless I scroll with the whole page slider. I also need to get to the bottom slider to move around things to my liking. Like to get the scoring in the right order. It will be better if there is only one scrolling option - that in the data field. It will save a lot of clicking and scrolling in the length.

I find the new view options confusing. It is much more intuitive changing when it is visualized with arrows and x for delete. It will also allow you to have more options closer together. But good thing that the new version isn’t transparent. That makes things easier to see.

The version I prefer, except for the transparancy 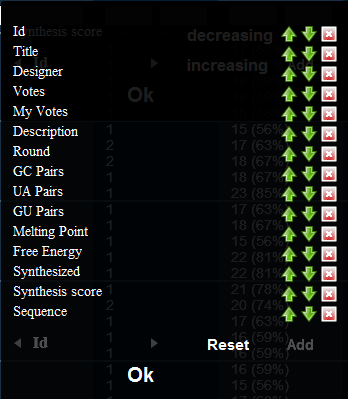 Another huge advantage with this version is that I can temporarily delete the columns that I don’t need. Having only the columns I need in the window, also means less scrolling. For voting I use some columns and for lab, I use others. I usually don’t need the Vote and My votes columns, when I do lab analysis and when voting I don’t need ID, Synthesized or synthesized score. When I look for something specific, I sometimes make a lot of columns away, as I don’t need them and they are just in the way. Having fewer columns up and just the ones I need, also makes it easier moving them around to get them closer to those I want. The delete option makes things easier.

Base numbers out of synth

When I enter a lab, I usually start sorting the designs after score. When I then afterwards set SHAPE data to continuous, the page loads again and reset the scores of the designs to disordered.

I will like the new UI to remember my global lab SHAPE preference, as the old UI did. So each time I enter a lab it is set to continuous colors and so the score of the designs is set in the order I wish for.

The exact same breaking of order of the scores happens when I want to switch from SHAPE colors to base colors. It re-reads the page and scrambles the scores. It also lands me a different place on the page so I have to start scrolling again + sorting the score again.

When analysing I often shift between SHAPE colors and base colors. With this option, I could toggle painfree between them.

Only thing changing was colors, not position, nor score.

I agree with Eli. This is the single biggest issue I’ve found.

I’ll add that there’s a general problem with the new UI in that it seems to have been designed and tested by developers with very large monitors. On a large enough monitor and a large enough resolution graphics card, there wouldn’t be so much scrolling needed. But I doubt whether that is typical for an Eterna player.

You could look at your Google Analytics and see what what range of screen resolutions people have, and then target the UI design to be easily usable for lower mid-range and up.

The new UI works seems to work like a google browsing session. Usually when I have finished what I want to do in a lab, I pick the browser option, to get back to the lab list overview, to pick the next lab on the list or what else I plan to do.

But now, as the game remembers all the things I have been doing while in the lab and it works like a browser session, I have to click through all the pages with the things I did, to get to the list with the labs, before I can get to another lab again.

I really miss the horisontal lines for each 5 line, in the new UI. Both between the sequences, but also between the data itself. When I make spreadsheats, I’m sometimes interested in the numbers of designs that eg score above 90% or I’m interested in how many designs have a certain amount of GU pairs. Having the lines for each five sequence, makes it real fast to count, where as if they are missing I am back to having to count each design individually. 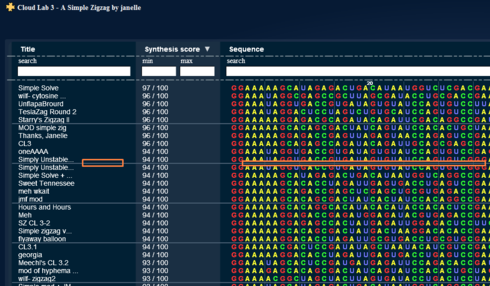 Today when I was attempting to vote for a lab, using the new interface, I noticed that there was no voting option. You can vote in the old interface, but not in this one. When you click on a design, this is what comes up: 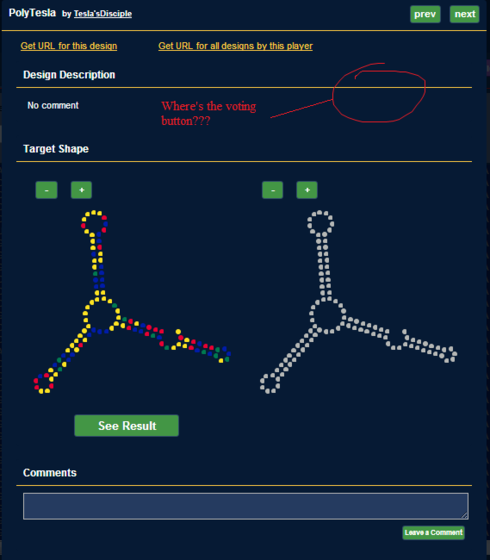 Thanks for sharing issues.

Eli - I’ll archive current issues, then email you. Let’s talk about whether they are resolved or not.

Tomoe - Actually, new lab browser is not released for “player proposed lab”, so we blocked “vote” function for a while. We will launch it in this week. Could you wait for it until then? Sorry for inconvenience.

Diana, how do I get to the old lab interface??

Hi Tomoe! You can get to the old lab interface by either clicking these symbols.

Lab is now very cumbersome to navigate those easier last mods and votes. Lab deadline is tomorrow! Should be extended.

I can’t go back through the browser when I see this screen. It gets stuck. Usually I could get back to the lab list that way. Now I have to pick lab from the active labs menu. 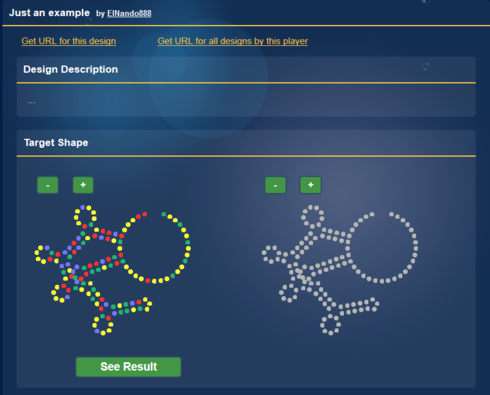 Ok, this is not working anymore. Now the way to the old UI, is this way:

Base numbers are out of synch in a new way.