I’m passing on a question about the estimate mode in switch lab on from Edward Lane. I tried answer the part I could. Please feel free to add what you know about this. your take on this.

Here is the original question:

“In the estimate mode the red glow that marks where the aptamer site ought to be is in two places - that do not form the opposite sides of a loop, if I recall correctly they are shown as being part of a stack and part of an unconnected loop.”

Or as he reformulated it:

“If the red glow doesn’t (in the estimate mode) make the same/similar shape it did in the target mode, does that mean that the aptamer molecule is not actually ‘bound’ - so ‘switching’ failed ?” or phrased differently - what does the location of the red glow ‘mean’ in terms of binding/free energy/etc.

Edward_Lane: can someone confirm that the estimate mode in switch labs only ‘works’ properly for the unswitched state ?

Eli Fisker: Ed do you mean in general?

Edward_Lane: @eli I meant in general, looking at the link you gave now

Eli Fisker: Ok, but lately we did get acces to get the binding state fold in switches too

Eli Fisker: Earlier we couldn’t do in switches

Eli Fisker: I mean I can make the estimate fold in binding shape too

Edward_Lane: @eli yes I can make it but it doesn’t make ‘sense’

Edward_Lane: and then brourd’s submission - which was at the top

Edward_Lane: @eli, first I look at the target shapes for bound/unbound, and I see that bases 20 to 27 ‘hold’ the molecule

Edward_Lane: then I go to the unbound state (1) and the flask to show estimated result 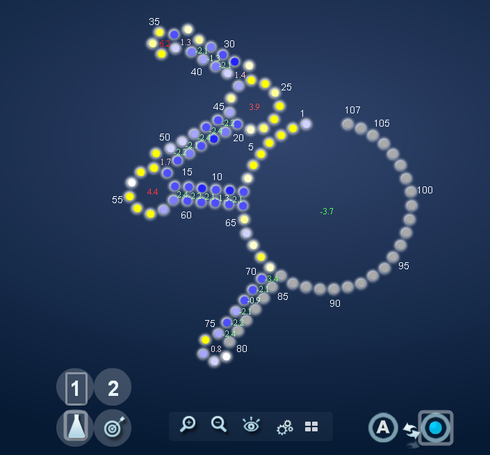 Edward_Lane: then staying on the flask but switching to 2 (the bound state) I see a tiny change in the shape - unpairing bases 27 and 43 (with very little change in the blue/white/yellow info 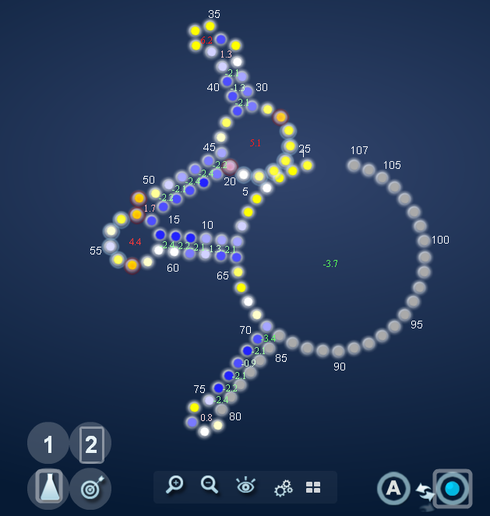 Eli Fisker: No binding molecule in the second state according to the estimate

Edward_Lane: but the bit that doesn’t make sense to me is that the ‘red glowing stuff’ which supposedly marks where the aptamer should live doesn’t exist

Eli Fisker: I can’t explain that.

Eli Fisker: The estimate itself makes sense in the way that it does resembles the shape 1 most

Edward_Lane: yes exactly, seem the same for other puzzles it seems that the ‘shape data’ passed to the ‘estimate’ mode doesn’t include anything to ‘constrain/boost’ the aptamer binding site as being otherwise ‘unbound’ 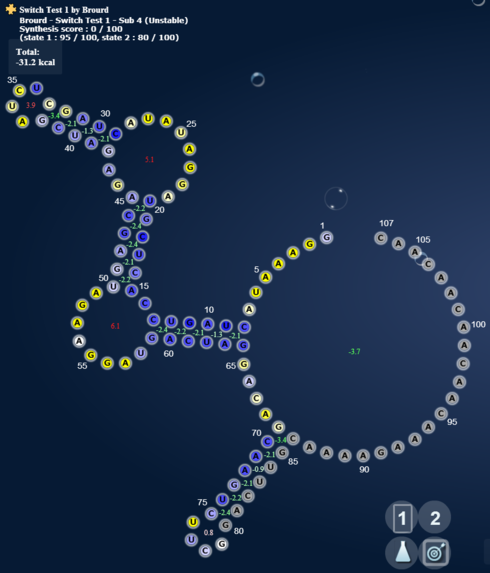 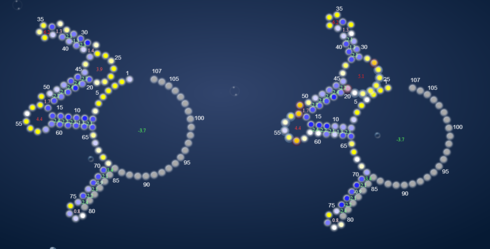 I have marked the aptamer position in the 2 state target. 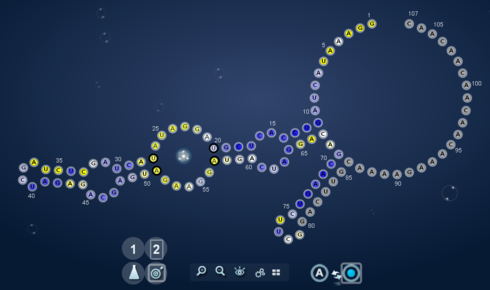 I then switch to the estimate. And the red markings occur in exact the area between 20-27 and 51-57 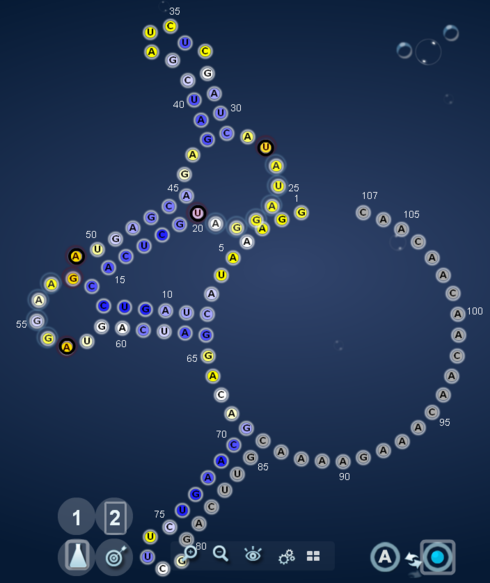