What is a base pair?

In molecular biology, two nucleotides on opposite complementary DNA or RNA strands that are connected via hydrogen bonds are called a base pair (often abbreviated bp). In the canonical Watson-Crick base pairing, adenine (A) forms a base pair with thymine (T), and guanine (G) with cytosine © in DNA. In RNA, thymine (T) is replaced by uracil (U). Alternate hydrogen bonding patterns, such as the wobble base pair (e.g., G-U) and Hoogsteen base pair, also occur—particularly in RNA—giving rise to complex and functional three-dimensional structures. Importantly, pairing is the mechanism by which codons, tri-nucleotide sequences that map to amino acids, on messenger RNA molecules are recognized by anticodons, tri-nucleotide sequences that pair with a specific codon, on transfer RNA during protein translation. Some DNA- or RNA-binding enzymes can recognize specific base pairing patterns that identify particular regulatory regions of genes. 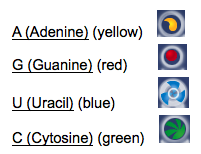