2 SHAPE questions are giving me the blues.

Eli suggested I post my question about the SHAPE data in the forum. If I am understanding correctly, the darker the blue the better the bond, and that “light blue” bases in loops are scored as yellow… so two questions:

In lab 3, I compared the top score top 97 to mine 93. They have less yellows in the stacks, and I understand that is why they get the extra points and such, but my bonds are much darker and more consistently so:

Anyway, hope something in there makes sense… i’ve tried to post pictures. 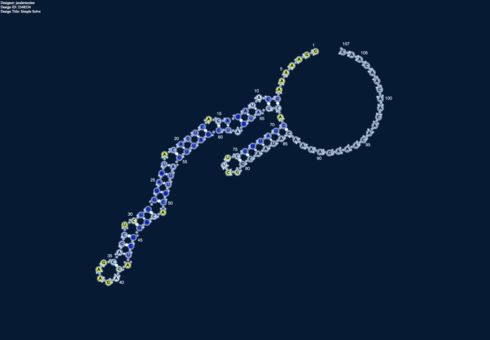 In terms of mismatches in color across a pair, it could be that the RNA actually misfolded into an alternative local structure there. Another alternative is that occasionally the chemical modifier 1M7 can react at paired residues at the ‘edge’ of a stack. We are tracking down this possibility now…

If you would also like to know which bases did not score a full point, they would most likely be: 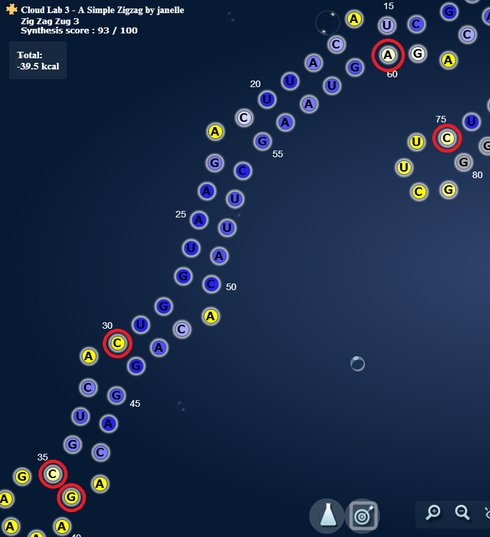 Bases 30, 35, 41, 60, and 75 out of the 79 scored bases. The winner in comparison only had 2 bases that did not receive a full point, and those would be bases 30 and 41. As you can see, it had similar problems, the lonely base pair at 35-41 had issues with being detected in most designs, and I do not believe any designs gained the full 2 points there, and very few actually scored 1 point. As for base 30, I believe that falls under “the chemical modifier 1M7 can react at paired residues at the ‘edge’ of a stack”. In fact, this same thing has happened with many designs that have a single nucleotide bulge loop.

I think it’s all complicated by the fact that there are actually many shapes represented in solution at the same time and the scoring is based on a closest fit to the “average”.