About the modeling of binding sites

The purpose of this thread is to inform players about the path I took to create the aptamer models and warn them about my ignorance.

Let’s take the example of Arginine. The reference structure is deposited on PDB with accession 1KOC. From that data I derived the secondary structure that you see in the related puzzles. With some clutter made invisible, the most important features are presented in following picture: 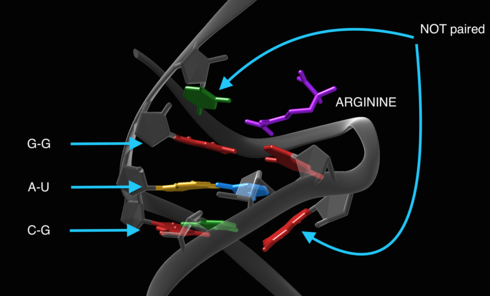 As you can see, none of the engines considers the 3D-derived structure (on the left) as the local MFE. Both Vienna engines predict an additional CG pair (center), while NuPACK begs to differ about the helix and predicts different pairings altogether (right side)

The rather big concern here is the noticeably large difference in predicted stability in all cases. And here is the point where I need to confess my ignorance. We are told that the aptamer has a certain affinity with Arginine. The exact value doesn’t matter at all, as long as we know that the experimenters will tune the concentration in the solution so as to provide about -4 kcal/mol of theoretical “boost”, matching what we modelled in the game. The question that arises is whether the “boost” is a global effect or not. For instance, let’s take Vienna2: do we assume that our designs will fold as predicted by the engine, and require first a conformational change (breaking a CG pair) costing +2.5 kcal before receiving the boost, getting us to a total of (only) -1.5 kcal/mol wiggle room? Or should we rather expect that the actual boost provided by the binding of the ligand also compensates for the +2.5 kcal/mol loss (in which case, the current game model is off by that amount)? I just have no idea…

Similar issues arise in other binding sites, but far less pronounced I believe. For Theophylline, you should know that the AU pair at the bulge does NOT form when the ligand is bound. What that means for the thermodynamics of the construct is unknown to me.

Such questions didn’t appear when we were designing with the well-behaved FMN aptamer, where we were lucky that no canonical base pairs could easily form within the binding pocket. I just thought I’d give players a heads up about these new ones.