AC non-canonical pairs are both 'cool' and important.

AC non-canonical pairs are both ‘cool’ and important. Half the base pairs in the stem-loop transitions beginnings of this viral packing code are AC.

next generation of eterna: solving the entire 3D structures of these viruses genomes. and how their conformational changes allow the virus to compute whether and how to move forward in its life cycles. and disrupting those computations. Really. We’re on pathway for doing this.

This is a super cool article and image, you shared there, Chris!

That for sure are some oddball loop closings. There are consistently pyrimidines across each other at these loop closings. It almost even goes for the stem bottoms towards the single stranded stretches.

And my favorite quote from it:

“If you think of this as molecular warfare, these are the encrypted signals that allow a virus to deploy itself effectively.”

I also noticed the loop “boosted” with A’s on each side of the loop. It is exactly those that are used for the packaging. As I understand the CA stretches are hold together by Ca2+ ions.

C-A pairs are often C-A+ where the A grabs a proton from outside solution at its N1 atom. In 3D the pairing looks like a G*U pair.

Because of the requirement to grab a proton, these C±A are typically only stable at more acidic pH – more acidic than what we used in EteRNA experiments or the experiments used to estimate the ‘nearest-neighbor’ energy values used in the game.

EDITED: Its the A that is protonated in the C-A ‘wobble’ pairs to make them look like G-A ‘wobble’ pairs. Thanks to ElNando888 for catching the mistake. There are protonated C’s in other kinds of RNA interactions (including C-C pairs!).

Hehe, and I couldn’t help wondering if it would be possible sneaking some useful microRNA’s onboard in the virus particle, packaged with the right loop sequences, instead of the virus sequence.

Something they expected, as the sequence would pack up in 3D space inside the capsid. I’m imagining the hairpin loops touching the walls.

So while our MS2 lab with FMN aptamer and MS2 hairpin are not packed inside anything yet, I see distance between elements and switching segments play a role. And magnet segments for switching are either nearby in sequence, or brought close to the aptamer or MS2 sequence, by structure build to make them be close in geometric space, while not close in sequence.

Thx for the explanation.

So basically this viral RNA works by maximizing its wrapping up ability by having a lot of very specific spots for grabbing stabilizing ion’s - for bad ass “gift” delivery.

I’m guessing the RNA grabs the ions, before it go and get itself packed up. But then again, if the hairpins are stiff, can they then enter the vireon? Or do it grab the ions after starting entrance?

i think the order of events in terms of ion binding is unknown. also a plethora of ion types – mg2+, ca2+, polyamines – and other proteins are at play. at any given point there are enough ions and proteins to neutralize the RNA, but many of the ions form a diffuse ‘cloud’ around the RNA; the exact composition and the ion locations have been hard to characterize. we’ll talk more about targeting and understanding viruses in 2016…

Oh, unknown. Sorry, can’t help myself. Silly idea wants out. I wonder if certain ions are more unwilling to enter said capsid than others? Basically if ion concentration is different inside capsid compared to outside. Potentially explaining why folding happens in capsid. Not expecting it to be known.

And for anyone who wish to brush a bit up on viruses till then, check out this introductory material.

I couldn’t let go of the question of ions inside or outside of the virion capsid. I decided to reformulate the question to if there were something inside the capsid that would harbor ions, for when the virus needed it for the packing up tight.

This made me remember that viruses are made of subunit tiles. Which lead me to asking if the virus subunits themselves could bind/store ions.

I decided to ask the internet and this preliminary study attached to a grant application seems to say that this indeed could be possible. 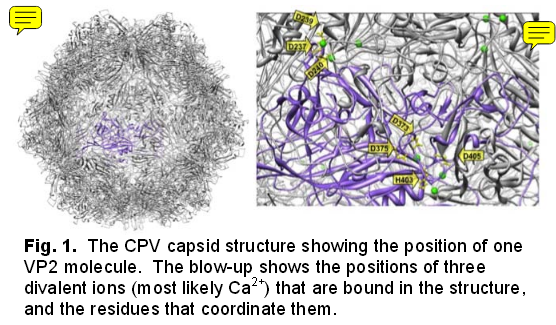 “Many different viruses bind ions within their structures, and in some cases those control “switches” between different structures. CPV and FPV capsids bind and release two or three divalent ions within each capsid subunit (giving 120 to 180 ions per capsid), and we have determined the crystal structures of capsids with varying numbers of ions bound, and showed that those stabilize two loops in the capsid (60). This may be a common mechanism in parvoviruses, as in MVM it has recently been shown that ion binding in the capsid affects DNA packaging and release. We can remove or prevent ion binding by chelation, incubation at low pH, or by mutation of the residues involved in coordinating the ions. The 3 Ca 2+ per capsid subunit in CPV (and the 2 Ca2+ in FPV) are coordinated by groups of surrounding Asp and His residues.”

So I assume something similar could be going on for RNA. I really like the thought.

Along the same lines, take a look at this paper which describes the influence of pH (which modulates the probability of protonating A or C) as well as a polyamine (spermidine) which is common in viruses (and present in our own nuclei):

So both viruses use the same CA mechanism for harboring protons. Interesting! Thx for the paper.

I noticed that the virus from the paper you shared, didn’t use the AXXA motif in the tetraloops, like the virus that Chris mentioned did. As one of the hairpin had that UUUU motif that the mutant of the other virus disliked for having instead of the AXXA motif.

I wondered what made the two viruses different, so I looked them up in the WIKI. Both are plant viruses. However they have a big difference. The small one you mentioned is a satelite virus - Satellite tobacco mosaic virus - meaning it needs a bigger helper virus to do anything. And the other - Turnip Yellow Mosaic Virus - has 21 proteins - at least from what I understood from the protein database. (For anyone interested in learning about satellite viruses, check out this: http://watchingthewatchers.org/indept…)

So it would make sense that the bigger virus might add more means for packaging than a smaller and simpler virus. Indicating that the CA/CC mechanism is the most fundamental. And that other later added mechanisms may be build on top.

In the 2002 paper they were running some mutation studies. And all the mutant that had the AC, CA and CC deleted did worse. Except for one odd mutant, which just happened to have AA in the internal loop. Despite this is not a tetraloop as in the new study Chris mentioned, this loop has the same “boost” pattern, like the AXXA tetraloops.

I found it fascinating that the mutated viruses so quickly regained the removed CA CC thingy.

I was actually looking for this Tobacco satellite virus the other week, as I was claiming that a virus could be as small as having only 2 genes, and I couldn’t remember where I saw it. Thx

The WIKI also have a breathtaking beautiful description of it:

“Klaus Schulten at the University of Illinois, Urbana, and his colleagues built a computer model of the satellite tobacco mosaic virus, a tiny spherical package of RNA. Running on a machine at the National Center for Supercomputing Applications, Urbana, the program calculated how each of the million or so atoms in the virus and a surrounding drop of salt water was interacting with almost every other atom every femtosecond, or millionth of a billionth of a second. The fleeting simulation, published in this month’s Structure, reveals that although the virus looks symmetrical it pulses in and out asymmetrically, as if it were breathing.”
http://en.wikipedia.org/wiki/Satellit…

So now I’m wondering if this likely ion harboring of the sub units have anything to do with the assembly process of the capsid itself, in the first place and are not just for packaging. I mean beside the more obvious pairing between the subunits themselves at the sides.

And it seems like the answer is yes. I didn’t catch it in first read, but I reread Chris article and noticed that this seems to be what they are actually saying. That the RNA sequence and loop motif is actually what is initiating and supporting the capsid formation.

So while these virus subunit tiles are protein, I wonder if something similar could go on for RNA lego tiles, or if they could be designed to harbour ions. If so, I suspect we could use it.