Switch Puzzles are made up of a combination of single NT’s and independent NT threads.

Single NT ’s are in loops in each State.

NT threads cut across States and must always alternate between 1 or 2 choices given what an adjacent NT thread choice was.

The threaded nature of RNA switch puzzles is a key visualization that distinguishes them from single state RNA puzzles.

To resolve Switch puzzle, it is helpful to:

2.  know the structure characteristics of each NT in the thread

Being able to holistically look at an entire thread and the structure characteristics of each NT in that thread across all Switch States makes selection much easier.  To do this, imagine matrixes containing this information - see below.

Note:   when I talk about energy differential, I mean the difference between the sum of energies in all three States in the the Target Mode versus Natural Mode.

First, a vector table that lists each important structural characteristic, then includes the NT# if the NT has that characteristic in that State.  So for example in below, the table indicates that NT3 is in a 1-1 Loop in State 2.

“Boosts” indicate that the NT position in that State is in a boosting spot. 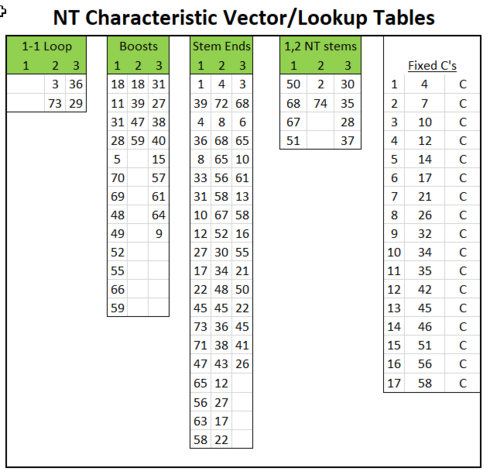 Secondly, create Matrixes for both Single NT’s and Threads that show their characteristics.

The NT Loop Matrix below shows every NT that is a loop in all 3 States, the actual answer, what the matrix rules suggest and if that NT is in either a boost position (B) or a 1-1 Loop (1L). 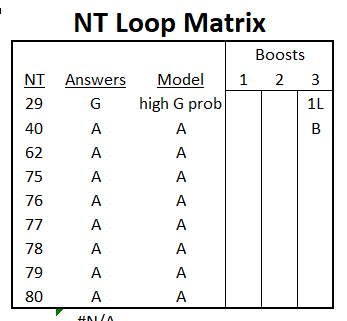 Here are the Loop Matrix Rules I currently use:

1.  If boosts within loop have already been exhausted, use A (you have to visually see this)

The Thread Matrix lists all NT threads and then shows if they are fixed C’s, the answer, what the model suggests and then whether they are in a boost or 1-1 Loop, or at a stem end (“E” for 1 or 2 stems and “e” for stems > 2NT’s.

The Thread Matrix below shows the 2 longest threads in Puzzle 423.  For Thread #1, all the choices are fixed because the thread contains so many fixed C’s.

NT’s highlighted in yellow indicate they both branch off from the NT just above them.

NT’s choices highlighted in red indicate that the model made an incorrect selection. 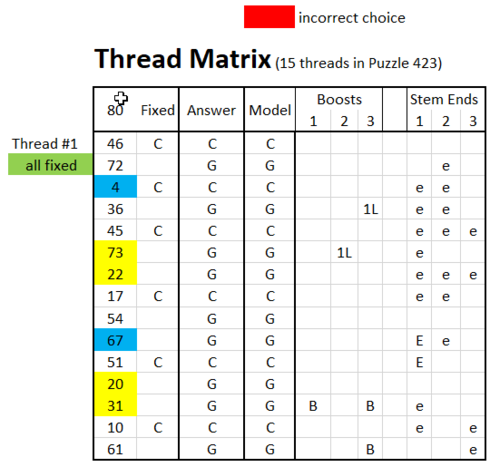 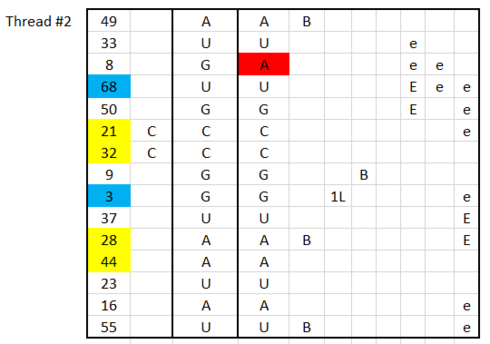 The rules I am using for selecting NT’s in threads are:

First follow any required choices from fixed C’s (including using U’s after G’s because in these puzzles Malcolm says no more C’s are needed).

Then if any NT in is a 1-1 Loop and is any boost position, use a G rather than an A if that is appropriate sequentially.

Also use G if there is at least a combination of 3 boosts or stem ends if appropriate sequentially.
Otherwise use A’s or U’s.

Using the method described above with the Steps below, I solved Puzzle #423.  I selected puzzle #423 because no one else had solved it and it has been out there awhile.  I will continue within universe of Malcolm’s switch puzzles to test and develop rule sets and see what kinds of pattern problems remain unresolved.

Step 3.   For remaining threads, going from longest to shortest, use AU selections that minimizes energy differential (use G’s where thread matrix rules indicate)

Step 4.  In areas where State is in red, try G’s in any remaining 1-1 Loops or boosts and use if it lowers energy differential.

Step 6.  In areas of red, try replacing A’s with G’s (often to repel undesired linkages) - and use if it lowers energy differential.

very interested in finding ways to compare thread structures and vectors across many RNA designs.

And if you have any suggested switch-related rules, please share.

(so many edits!..lots of incentive to automate to eliminate my errors)

Below are two ways to view Switch Threads, using Thread #1 from Malcolm’s Switch #423 as an example.

The way to first see Threads in switch puzzles is to highlight an NT and see where it connects in the other States.  In the example below, I highlight and follow the thread connections from NT46 all the way through. 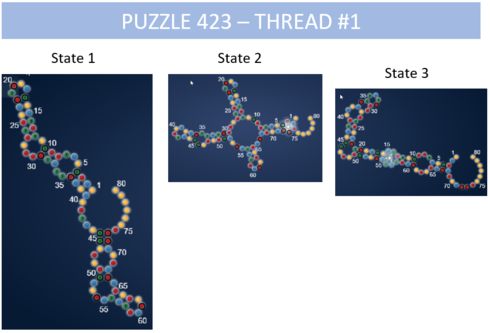 It’s hard to see all the highlighted NT’s above - you can click on this images to see bigger version…also if you go into Malcolm’s Switch Puzzle 423 and highlight NT46, you can follow and see this long thread.

Below is another way to visualize this same thread.  I like this way because it shows how the thread moves between the States.  The way you read it is the 2nd or lower NT’s position shows what State the NT Pair is located.  Where NT’s don’t show under a State, they are in a loop in that State. 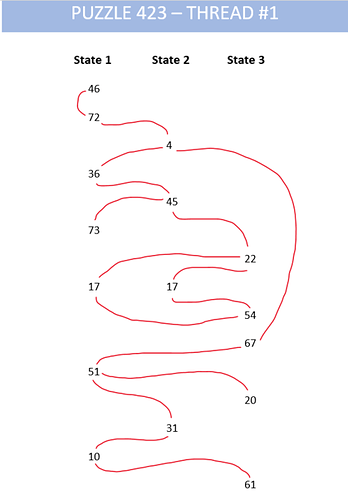 As I worked on the automation, I have kept finding many errors in my Thread #1 structural depiction.  I’ll claim first-time through novelty error permission…and also submit this comment so I can’t fix any more errors I find!

I do like the beauty of this structural expression.
I am seeing how helpful it can be in NT selection process
and also if there will be a way to store thread patterns

so they can be accessible from all puzzles.

I will be curious to see if patterns that emerge within this type of viewing will contain any helpful information.

Going forward, adding a blank line between two NT’s when they are both being connected from the same above NT makes sense.  Adding that as a convention will mean that every other line must either be A/G or U/C.  That information embedded in structure should make it more useful.

Below I added motifs for both of the other known structural Switch Thread elements.

First, the alternating blue/yellow colors to illustrate the required alternating A/G and U/C patterns.   In practice, these colors will switch depending upon your first NT selection of a thread…showing that all other NT selections must be consistent with that choice.

Second, the vector matrix - which will expand to accommodate useful structural characteristics.  I envision adding conditional fields depending on other NT choices, such as higher C probability if NT is in located in loops in the other two States if that NT is in blue field.

The other two fields I would like to see here is the total energy differential for each of the two possible NT’s taking into consideration all current chosen Thread considerations.  That would be very cool.

Being able to see these energy differentials across all threads at once would help make the next NT selection.  Designing the computational structure so that it helps us.

If the design process creates a solution (DP/S) which eliminates the distance between the energy model (EM) and the switch problem (SP), we can view the scope of the challenge as (EM-DP/S) + (DP/S-SP).

By embedding the energy model within all aspects of the design process, EM-DP/S goes away. 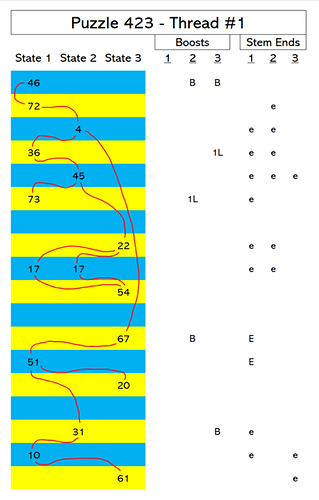 As for the use of the term “thread”, there is a long history of players using the term “chain” for the same concept. Here’s some links

Perhaps “thread” is really a better term and you will want to encourage its adoption. But if so, it would be helpful to longer-term players to make the connection between the two.