Joe, first I want to say a big thanks for listening to our input on 3D RNA folding. I really like what you did with it.

As I told Mat back when the 3D game began: I want everything that a computer can do painlessly, done by a computer and anything that a human will find fun, left to a human. And I would love if the two could be combined. So let computers enhance our abilities. Let them do what they do great and let us add in with the part humans do better than computers.

You solved this beautifully, by reversing the original problem. Instead of making humans struggle with 300 different motifs of many angels, you are letting us point the trajectory for the RNA for them instead and made the computer do what it do best, put the motifs together to get to that path.

I have been thinking a lot about what you say in your video about your program and what to do with the RNA algorithms that are solving puzzles in simulation that never will work in lab.

These structures will not be solvable in lab as is. 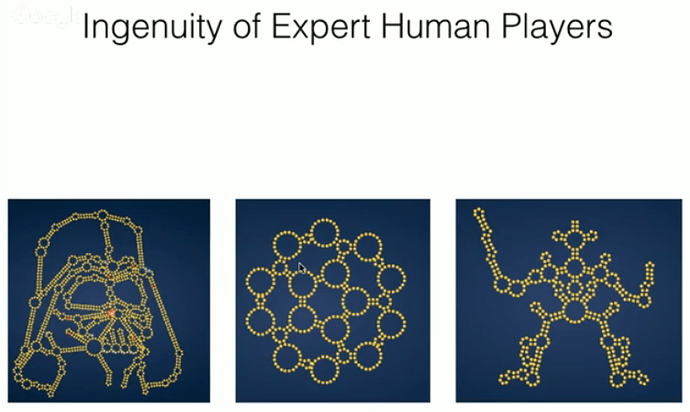 Image screen napped from the video by Joe on RNA make, minute 16.

RNA folding algorithms will happily solve hopeless lab puzzles and regularly succeed in 2D simulation, while their solves will not fly in lab and nature in 3D. Plus allow players to succede at even more hopeless lab candidates. I have been pointing out why not having a stop mechanism for bad folds is a major problem plus features characterizing bad solves.

I have been thinking about how to get us a stop mechanism, just as protein prediction programs already have, so unsolvable lab puzzles don’t waste computation time or unnecessarily stomps the computers.

You mentioned that your program calculates the RNA path in seconds. Base pairs are shown as simple round bricks stacked on each other. 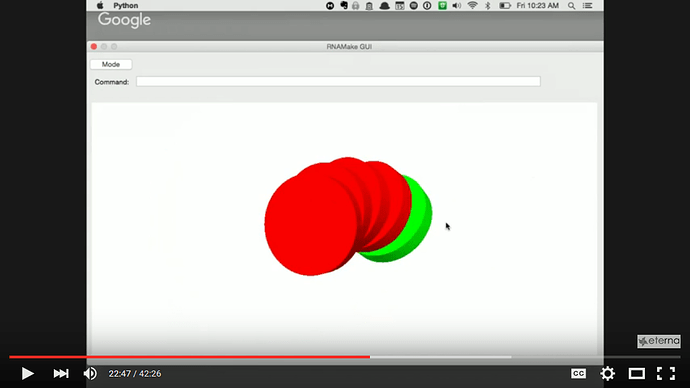 One more image from the video

I really like this simplified display. I think we can use it for something more than just drawing paths for RNA.

Joe, I simply think you program may hold the key.

If these worm wiggles of RNA can sense when they touch each other in 3D, I think we can use it to help us predict better if a RNA is possible or not. I think if this could get combined with 2D RNA folding algorithms, I think your program could be the stop block that I have been calling for. To arrest bad RNA folds before wasting computational time and lab slots on them. 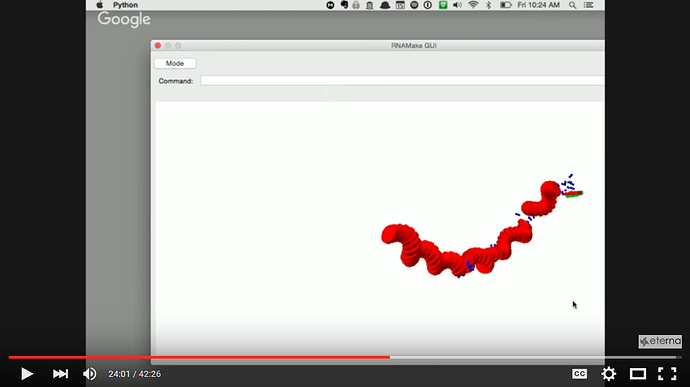 I mean of cause this is still simulation and as such we can not fully trust it to say accurately if there is one or two clashes, that this RNA can not fold in lab. However is there are multiple of these clashes, then we can probably say that this puzzle is likely not going to be foldable in lab, since there are a big number of sterical clashes in 3D.

Basically the 2D RNA folding programs are blind. They do not realize that if they have 10 of 3 base pair long stems very close together in space, there will not be enough space for all of them. Some of them will be occupying the same space in 3D and taking up far too much space, for them to fold correctly.

I think the program could be used as a help for making the 2D RNA folding algorithms seeing - instead of blindly just folding in 2D but crashing things in 3D.

I have an idea for the program. Some of the lines are way too straight. As also Rhiju mentioned, that bend would be too sharp. 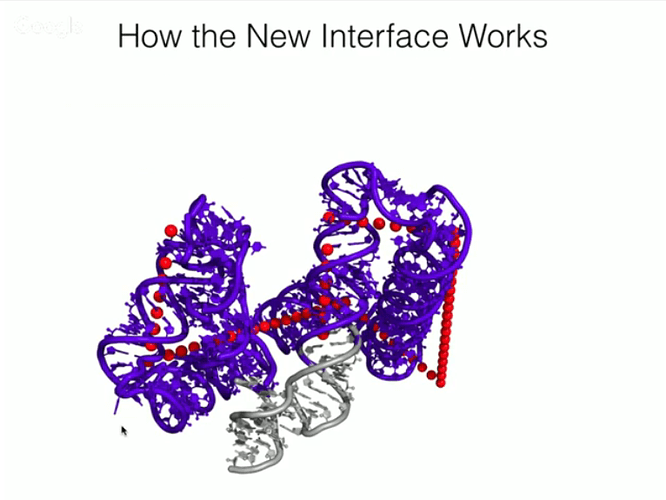 What I mean, is if the program would automatically give us a curved line instead of a straight line, when we bend something and we could set how much curvature. I think such restraints would also help 2D programs to recognize and stop unrealistic folds. 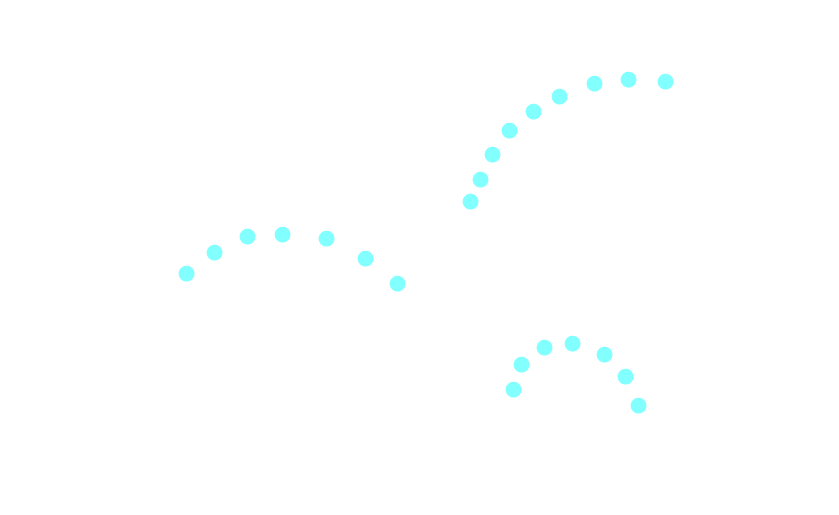 Your gaming ideas for our 3D RNA game

This post is extremely good. I think the main thing to really keep in mind though is that this 3D ‘model’ is extremely basic. I am assuming that each motif retains its conformation from the pdb. This may be true for some motifs but we don’t know for how many. I would worry that relying on this information to guide 2D modeling to avoid clashes may mislead people. Also the number of motifs I have access too is a very small minority compared to vast space of ones that Eterna players can craft. But at the same time it might give a basic ‘view’ of what the topology might look like in 3D space. Specifically I like you point of long vs short helices and I agree many people would be surprised how little space 3 basepairs is in 3D space.

It will definitely be interesting to see how this tool will be used in the future along side classic eterna. I totally agree with the curves and yes that will be an option at some points but for now I am just keeping with the straight lines and will iterate, other people including Rhiju have also pointed this out. I hope to have to a full javascript implementation of this at some point this year and it will be exciting to see what people do with it.

As I mentioned in my presentation and in other places, this kind of feedback is extremely valuable. Many of my ideas for this interface came from feedback from the first Eterna3D.