Can other engines such as LinearFold generate pairing probabilities data?

Currently, arcplot only works with the ViennaRNA-2.4.9 energy model (and only for small to medium sized single-state puzzles or 2-state switches). If other folding engines can (1) generate pairing-probabilities data, and (2) handle aptamer energy bonuses, they could possibly be supported as well. While the best way to support this might as an in-game booster (still not done for arcplot), it could also be done in the standalone server mode.

Whether or not this worth pursuing may depend in part on where Eterna labs are heading next. If it involves oglios (which ViennaRNA does not support) or >2 states (e.g. OpenTB), or very long RNAs (as rumor has it), it may not be worth while.

LinearFold seems to do rather well on very large strings so it is said per my reading but I will only state it here as a rumor.

I expect that IF LinearFold does probabilities, it’s compute time for probabilities should be similar (the same as?) for computing the most probable structure; it’s just that it would suggest fewer optional pairings/structures as it saves time essentially by considering fewer alternative foldings. The advantage would be that it could do so FASTER that ViennaLib on large sequences. However, since arcplot doesn’t scale very well to large sequences (the bases get too small to see the colors) perhaps it’s a moot point for using LinearFold as a probabilities engine, expect perhaps for LinearfoldC as a proxy for Contrafold.

However that still leaves other folding engines such as NuPACK. I’ve heard a few requests to get NuPACK MFE shapes as arcplots.

But again: Whether or not this worth pursuing may depend in part on where Eterna labs are heading next. … It they won’t involve NuPACK and/or 2-state switches it is likely not going to be worth adding a second folding engine at this time.

The immediately upcoming labs are single state - however that certainly does not mean that we’re not going back to the types of labs we have been previously. At this time, I think the specifics of what types of labs we will work on long-term is uncertain, but I predict it will be a combination of different things as it has been till now. I’m not the best person to ask though, as my knowledge of any such plans are limited.

If indeed the next labs are likely single state design of large sequences/shapes, that’s all I need to know for now.

It seems it can do pair probabilities & give partition circle plots.
Goto: http://linearfold.org/partition 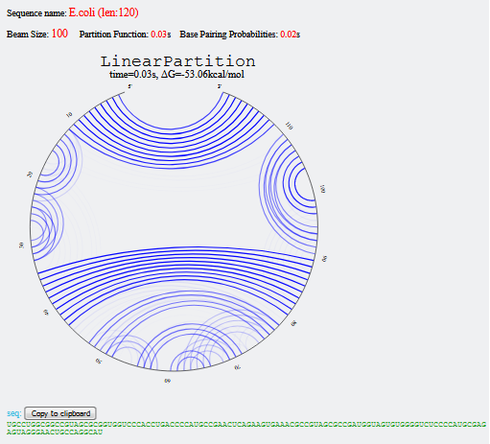 Yes, their team recently released LinearPartition that allows for generation of the partition function in linear time. We haven’t integrated this yet, but it’s on our radar!