Can't connect to chat from my accout

Hey guys I believe that I have found an interesting bug for y’all, so I can view the chat and the players talking when I’m not logged in but I see this as soon as I do log in 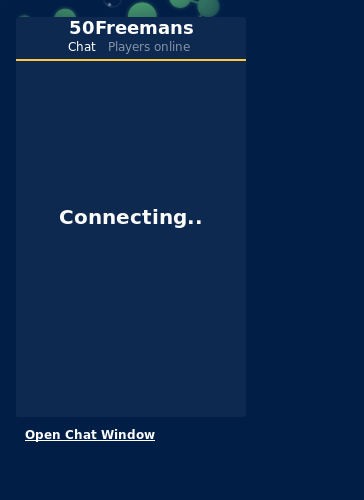 … and that’s it, the text just fades in and out very nicely (I love your UI btw) 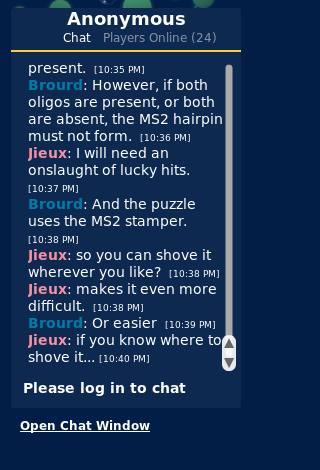 UPDATE:
While in a puzzle if I minimize and reopen the chat window it loads but has a ghost fading “Connecting…” 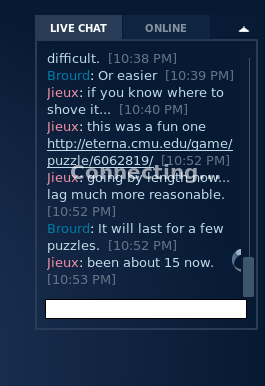 As far as I know, the problem with usernames starting with digits was never solved. The issue is a lot more complicated than one would think, unfortunately. I’m taking this issue in my todo list, but quite honestly 50Freemans, I would suggest that you create a new account, because it is uncertain whether I can fix this without having to recode the entire chat system (which is probably not going to happen any time soon)

The easiest way to “solve” the problem, will be to prevent account creation with such usernames, which is what I’ll be proposing at the next staff meeting.

One more tiny comment – we’re thinking about open-sourcing development of some eterna features, with chat as a pilot feature. If you (or someone you know) is interested in chat specifically, we’d be delighted to talk. An upcoming dev/player meeting (ironically, held over chat) would be a good place:

Hope to see you next Friday.

Thank you guys for the info,

@nando Would changing my username be possible(if so is there a button or an email to contact)? I don’t think I could get the NOVA labs points to transfer again(logging in button not responding/register doesn’t transfer points) and I don’t remember how I did it last time. If not I think I will just settle for a glitch with in-game chat(which I can post to :D)

@rhiju That sounds like a great idea, I have some experience in js html and css if thats what its written in otherwise I hope that it works out for y’all.

Actually the chat app is written in flash, but I wouldn’t argue with updating it (however, the issue would be for in the game, I’m not sure if it would be as easy to implement).

50Freemans: You can contact jnicol http://eterna.cmu.edu/web/player/48166/ who should be able to change your username to something that can access the flash chat.

Thanks Brourd just sent off a message will I need to change it over on this site manually too or is there a carry over if I log in over here with the EteRNA account?