Stuck on the weekly Ribosome Challenge puzzle or already have a solve?

No need to be alone with that.

Omei has been thinking about how we could better improve our collective ribosome challenge solving skills. He suggested a supportive forum discussion so we could share our trouble sequences and help each other out.

So next time you are stuck, just mention which Ribosome Challenge Puzzle you are working on and share your sequence here. Similarly feel free to offer a hint to one of your co-players.

You can also do what Astromon regularly does with his solves. Share them with another player who has also solved the puzzle and ask to see theirs. Then you can compare where you have differences. This has regularly helped both parts make an kcal improvement - me included.

Similar you can swap non-solves with your co-players, because you may not be stuck in the same area.

Omei asked a few players to volunteer their trouble sequences.

Omei: I actually asked spvincent for his, and he sent me three variants.

Here’s something that jumped out. 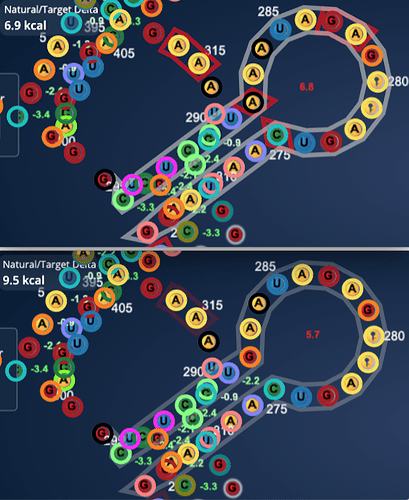 Looking at the puzzle in target mode (top pic) we see this hairpin whose stem forms except for the closing pair. Nothing done outside the hairpin can fix the closing pair, whereas reversing the mutation of 288 fixes the structure. This is clearly an improvement, even though it increases the delta.

Here is how I would deal with this unstable hairpin stem. Image taken from an unsolved version of the puzzle: 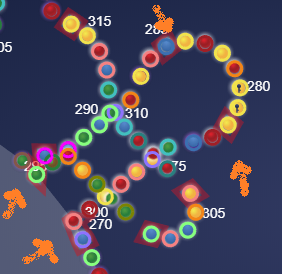 The hairpin has two sets of instabilities. One set in the hairpin loop and one in the stem. I would deal with them separately. (Orange arrows highlight)

Typically I won’t change anything inside the stem as is the case here, as the puzzles can mostly be solved with just single based changes. Mostly I would do that at a later stage. So in the loop I would try change base 281 and 286 and see which leaves less red. (base 286)

So first focus for a solve is stability. Simply ignore kcal until one has a stable solve.

If mutating single bases in a hairpin loop or its nearby single bases doesn’t make the part stable, then I will start mutating the base pairs in the stem.

Image of the bases I would first go for mutating in this hairpin: 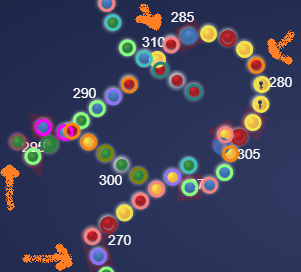 However that this can create stability for this local spot can sometimes be hard to see, depending on what your sequence hold. So I find it helpful sometimes going to a reset version of the puzzle and stabilizing local parts there.

POTW 1.12 has few mis-folds right from the start. It’s very time consuming to try to find 30 mutations out of the 409 bases manually.  I have used the “Mutation Booster with Bulk Submissions” booster to look for bases that produce larger drops in Delta energy, but stepping back using the prev box to look at every delta and 2d structure is very slow.  I copied and pasted the mutation sequences into the in game arcplot V2.2.2 beta interface. That lets me see several sequences at a time with their Delta MFE.  However, the delta in the Arcplot didn’t match the Delta in the POTW 2D page.  Has anyone else been able to use Arcplot to see Delta energy of bulk sequences?
Can the Arcplot be used to filter the delta readings so only delta’s greater then X amount will be displayed?

There is a different version of the Mutation Booster with Bulk submission that may help you with the process. It holds a delete option also, so when you press prune, it deletes all unstable mutants. This often leaves something as 50 solutions behind which is easier to look through for drops in delta.

Title: Mutation Booster with Bulk Submission plus Delete
The script ID is 9199282.

Here is a link to my copy of the script:

Thanks Eli,
I used that booster on the POTW 1.12.  I only want to mutate a few base locations. I first used the mark mutations booster and clicked (don’t automut) cancel box where the window shows the mutations. That basically unmarked all the bases.  Then I marked the 3 pairs that I wanted to mutate. I ran the mutation booster and it mutated the bases that I marked, but it also mutated the already mutated bases.

I only asked for 100 mutations for this test. All were false because I wasn’t anywhere close to getting a solution.  Maybe there will be a way to monitor the Delta and only save sequences with a filtered Delta amount like greater than 1.5Kcal. and be adjustable.

I copied the sequences into ArcPlot which uses Vienna2 I think, so the delta in arcplot didn’t match the delta in the puzzles. I should have looked to see if the arcplot deltas followed the puzzle deltas relatively up and down, but I didn’t think of it.

Puzzles like 1.12 don’t just have locally solvable MFE areas.  I’m finding that puzzles like this are dependent on two or more base mutations in different  (non local) parts of the sequence.  This is all the more reason why we will need to be able to hold one mutation constant and vary the other bases while monitoring the delta when we attack the actual subunits.