If the barcode could be hidden from the lab puzzles until solutions are submitted, it would have many advantages:

Then a unique barcode could be generated and tacked on just prior to synthesis.

I would rather disagree with this idea. I think it’s essential that we can observe possible interferences between our designs and the barcode. And contrary to many, I wouldn’t worry too much about the quality of the sequence within the barcode itself, since these shouldn’t count towards the global score. The only serious issue here is a possible interaction (misfold) with the rest of the design.

This said, I have to agree that the mechanism for selecting a barcode is not very satisfactory, and it can be quite frustrating to have to repeat submissions for finding a code that hasn’t been taken yet.

I made a simple experiment with a design that my bot Vinnie published in the Top Notch lab, called ‘Cereage’.

This is the barcode it chose : 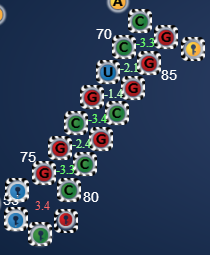 and this is what I changed it to : 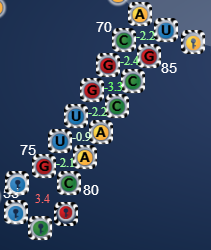 I propose to assume that the barcode I created was indeed computer-generated randomly. Now, let’s observe the impact on dot plots. 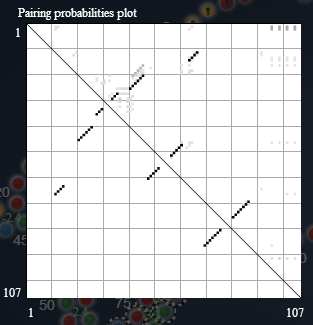 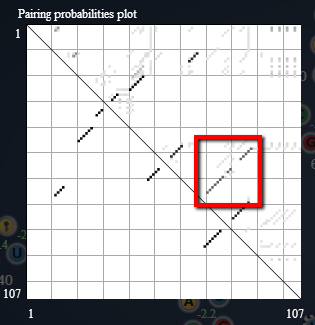 Personally, I’d call that a disaster.

Good point, and thanks for the reply.
I hadn’t seen any interactions with the barcode area yet, so I thought this would be doable. What about having a barcode with more decent combinations to choose from, or allowing duplicates if they are on different puzzles?

Allowing duplicates would defeat the purpose of the cloud lab. They want to synth everything in one go, and sort things out thanks to the barcode. This way, they can do 20 labs at a time.

I’m not sure what you call “decent” combinations, but now that we have Vegas rules in place (“anything goes”), I wouldn’t hesitate to use a ‘weird’ C-U mismatch in the middle of that stack, if it would fit my design (no interferences) and keep the marker stable enough. An AA at its start would be another ‘weird’ idea, but if I’m correct about the non-scoring of that stack, those are ideas to expand the possibilities. Otherwise, make it longer, but that would take bases off the design…

in support of janetmason’s request, a “barcode suggester” might be useful.

As the ‘uniqueness’ requirement is actually only half of the ‘barcode stack’ (NT’s #80 to #86 currently I believe), something that presents the user with 5 or so remaining sequences of those 7 NT’s (across all active lab candidates) would enable janetmason’s idea but also Nando’s point about studying the barcode interactions by a) changing the pairs of the ‘barcode-stack-sequences’ (and possibly the hairpin) or b) selecting a different seq. from among the 5 presented, or c) hit the random generator again to get 5 different sequences.

think i saw 'barcode generator" in some script, but am sure an Ajax call (to type: “puzzle”) and data.hairpins could filter out ‘used’ barcode-stack-sequences

I agree with nando. You do have to watch out for misfolds and I want to pick my own sequence.