Secondary structure direction is 5’ to 3’. You could identify the 5’ side or the 3’ side, particularly in multiloops. The other convention we follow is to list the pairs and boosts (non-canonical pairs) 5’ to 3’. The most commonly occurring boost is the GA boost, for example.

It’s primarily the ends rather that the sides that I want to refer to, although I’ll need to mention the sides too. In secondary structures like hairpins, stacks and internal loops, 5’ and 3’ are both at the same end, so that won’t do in this context.

I think I see what you’re saying - given the below screenshot, you want to refer to the green vs blue end of the stack? 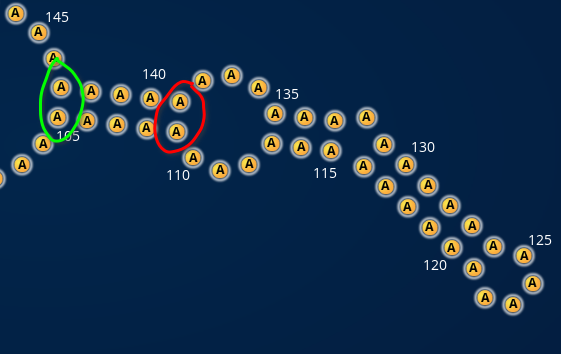 I actually haven’t seen any terminology used for that, aside from maybe the closing pair being the pair directly next to a hairpin loop.

If you consider the secondary structure from a graph theory perspective as a rooted tree, you might refer to it as being “closer to” or “further from” the root (or leaves), or maybe even a “parent” or “child” (depending on what part of the structure you’d identify as a “node”), but even then it’s still a bit squishy.

(Also, side note, sorry that this post initially got stuck in the spam filter!)

That’s right (green versus red). If there’s no existing convention, I’m thinking of calling the green end the “front” and the red end the “back”, with the sides being “left” and “right” as viewed from the “front” end.

@Hearsall sometimes people will refer to the base pairs and loop that are the most ‘further out’ in a hairpin as ‘apical’ – and I guess the opposite would be “basal”.

Would that be useful terminology?

(For stems and loops that are not at hairpins, it becomes a bit ambiguous to define a “root” for the secondary structure, so we might have to always resort to pictures…)

That would certainly work. Although I think using everyday words might perhaps be more congenial for people who aren’t familiar with the jargon.