Eterna 4: What are your BIG ideas? (Dev chat followup)

Following up on conversation in today’s dev chat: http://eternawiki.org/wiki/index.php5/2017.12.15_Dev_Chat

Eterna is at a really exciting moment - we have the potential to gain the resources and opportunity to completely rebuild Eterna - providing more robust infrastructure, more platforms, better global availability, and the prospect of making significant changes to the user interface, new features, and so on. The dev team wants to know the biggest dreams community members have as preparations are made for such groundbreaking changes. What have you always wanted to see from the Eterna website and game? What would make Eterna more fun? What would allow you to be more effective? What could help facilitate puzzle solving, scripting, testing hypothesis, or collaboration? What did I not even mention? Anything’s fair game!

List your best, biggest, visionary ideas for the next generation of Eterna here!

There’s a cool discussion thread started over at https://getsatisfaction.com/eternagame/topics/opentb-results on pattern languages.

as has been pointed out, one possibility for the future of eterna is to change its interface to involve manipulation of colored beads that represent these differnt domains. There could be an arbitrary number of colors, not just 4 nucleotides, to cover A, B, C, D, E,  … R, … and some kind of change in symbol to represent A’ [or rc(A) in jandersonlee’s notation]

I’d like to point out that we could even provide an approximate folding engine that simulates the structure of such a pattern given some coarse-grained “energies” for the bead attractions (which might even be tunable by the player). And could even simulate what happens when a small molecule binds, given an appropriate energetic rule set.   And then designs of those patterns could be compiled into actual RNA sequences by eternascript.

I suspect that such a bead interface would even let us design 8-bit adders… its always been a dream of ours to solve that ‘feynman challenge’, and i recently did a back-of-the-envelope calculation suggesting that we could make such a device with ~2000 nucleotides, and there might even be experimental ways to synthesize lots of such designs for testing.

A chatbot assistant as an intelligent front end for database inquiries such as:

Within the TB Round 2 A*B/C^2 Dec and Inc, show me the histograms and designs for all pairs:

·   that nt change being an A versus a G

·   with that nt difference located in the reporter complement

Show me the designs for the top 10 pairs with 3 nt changes with the highest Global Fold improvement and show me what and where those changes were.

Database source would be google files that contain all that data and links to both designs and histograms (see below sample of this type of file).

System would need visual pattern training to use the links to Designs to recognize forms such as “reporter complements”.

Input stamper as start for playing around with element sections

@Rhiju, you said the following:

“There could be an arbitrary number of colors, not just 4 nucleotides, to cover A, B, C, D, E,  … R, … and some kind of change in symbol to represent A’ [or rc(A) in jandersonlee’s notation]”

A start of playing around placing in full elements could be to give us an input stamper. Not unlike MS2 stamper - but instead stamping the input complements directly in the puzzle.

I would like more marker tools.
We currently have ctrl+click - a black highlight of the bases.
Having more than one type of marker would help with tracking multiple binding sites etc.
A simple option is to have more colors in addition to the black.
A better option might be instead of highlighting the base circle, to have lines following along the shape of the structure with some color options (similar to what Eli draws in the screenshots).

There is also the shift-click & drag mouse function. It is for a string of bases and it puts a gray shade along the selected string of bases.  It can be used in separate places of a design sequence by using it in different states.

I recall Cynwulf wishing for a way to highlight and seperate switch domains.

Today I realized there is an additional way we can use highlight, to seperate switching areas from each other. Just painting with bases.

I would like the black ring marker to function the same way that the base lock does. One can drag the mouse over a sequence of bases and they will be locked or unlocked. With the control click for highlight one has to do it one base at a time. This will save a ton of time.

I’ve had a number of ideas that I’ve either thrown around or found interesting based on discussions with other users over my time as an Eterna player, so I’ll try to compile them here (not going to bother searching for the original sources unless prompted, as there’s a lot of them and I think these descriptions should suffice).

In switch puzzles where target shapes are known, to assess which AU orientation to use for any pair, it would be helpful to see the total 3 state Natural/Target energy difference for the whole thread  using AU’s to fill in the connected pairs in other states.  So we could just flip AU orientations back and forth and see the consequential difference for the whole thread for all 3 states at once.

I like all these ideas! I would like a script that will find all possible kernal atractors, for a TB-olego and the ms2 for instance. Thanks!

Improving the detection and ratio’s of multiple oligo’s:

We are beginning to experiment with new small molecule dye targets.
Improved illumination intensity has been mentioned as a desirable feature.

With regards to the OpenTB labs, I am wondering if selective dye targets would work.
What if TB-A and B could be dyed Blue and TB-C could be dyed Yellow?

A discriminator can recorded the measurement in angstroms.
Resolution would depend upon frequency and not intensity.

I think that this would be a very interesting experiment.

During labs I like to submit solutions that satisfy all 3 engines; vienna, v2, and nupack. Would it be possible to have something that looks at all 3 engines at once, and gives limited feedback as to whether all conditions are satisfied? Because at the moment I have to manually flip between all 3 engines and that resets the “undo” function, so sometimes I lose track of what I changed and lose progress.
Or alternatively introduce something that doesn’t reset the “undo” when I change folding engine?

We are doing round 2 of Single-input switches, revisited.

The design scoring best in the first round (max fold change error 1.25) is a design using an alternative MS2.

The MS2 is showing up as not present and not turned off (red boxes) as the game is only made to recognize the original MS2, while the puzzle is conforming to structural constraints (green boxes). 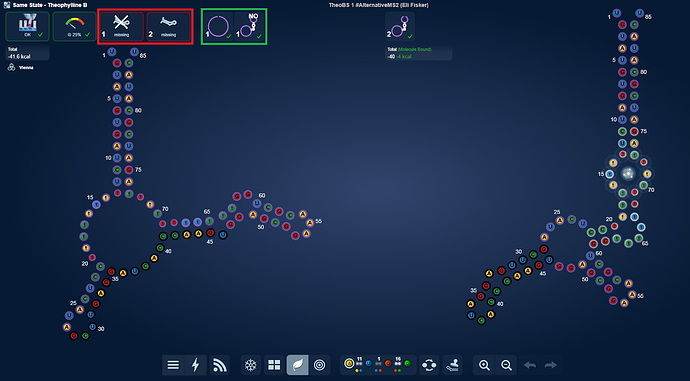 I would like to see the alternative MS2’s showing up as satisfied too.

I think this will greatly improve our amount of winners, because more players will start using the alternative MS2. Some of the new aptamers will work better with an alternative MS2.

Further benefit would be that we could use the mutation booster to brew up more variations. If the puzzle is recognized in game as stable, it will allow us to do a prune and be left with the stable mutants.

Hello all, this idea could easily warrant its own post, but I felt that it belonged here.

I commented to Eli Fisker earlier that, “the hard effort of the Lab techs and Devs isn’t always obvious on the site…and so sometimes it seems like they aren’t even there”.

This wasn’t a criticism of their efforts, having done wet-Lab work with RNA myself I am keenly aware of the time and effort required. I rather feel that these efforts don’t always transduce to the surface of Eterna in a way that is clearly noticeable like players.

The Devs and those members at Das Labs excel at getting the word out about new projects, when the need to recruit player help is at its highest. Similarly, the Eterna Teams excel at providing the conclusions of their research to players…information which is essential to improving player performance.

However, in between these termini there is the long and often arduous process of experimentation, the most essential part of any lab. It is during this interim that player interest can wain in a particular project and even Eterna in general (I suspect this to be one reason that some players have focused on player-made puzzles rather than the labs, the gratification gained through puzzle solving is both more readily obtainable and it is persistent). In short Eterna has a problem with mid-lab slump.

I believe that multiple solutions are ultimately needed to fix this, but I will propose one here. Anyone who has ever watched one of Space X’s Launch Livestreams knows how engaging they can be. The speakers maintain a near-constant engagement with the audience and have a contagious energy. And there is one more thing they have…clearly demarcated AND celebrated goals/milestones. Check out this video from the falcon heavy launch and pay attention to that timeline at the bottom of the screen

Each Lab has milestones and a tentative timeline. I think that if those milestones were represented more clearly on the Eterna homepage and if each milestone were celebrated when they were met, then players would be able to better see that there IS action happening, that progress IS being made. I’d be glad to hear other suggestions/thoughts from the rest of you, and to those members of the Eterna development and Lab teams Thank you for all of the hard work.

Maybe a scrolling banner on the homepage with: