Here is a space for testing and providing feedback on the new Eterna3D functionality, which is currently testable on the Dev server. All constructive feedback and bug reports are welcome.

You can test the Eterna3D interface yourself on this puzzle for the E. Coli Ribosome 5S rRNA: https://eternadev.org/puzzles/9218290

Additionally, you can upload and incorporate 3D structures in your own puzzles in the Puzzlemaker interface. At the moment the interface only accepts .CIF (Crystallographic Information File) files as inputs, but we’re planning on introducing compatibility with PDB files in the next few days or so.

Note that the Eterna3D structures currently only show the 3D structures for target mode (not natural/native mode).

Edit: Also a huge shoutout to Pragya for all of the hard work in getting this tool implemented!

Here is a demo for those eterna players curious about how to upload Eterna design sequences and get a simulation back on how it looks in 3D. Then you can save it as a file and upload it in the new eterna 3D. (Albeit that will have to wait till eterna 3D allows PDB files.)

Jump to the section Using RNAcomposer

All it takes is following step 1-4 through. 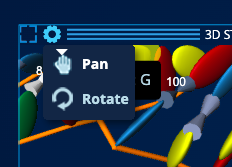 Second issue is the maximized box is slightly underneath the constraint boxes, making the 3D menu challenging to access. I find what I’m doing already is just not even using the maximize option and instead manually sizing the box and moving it around to where I want. Maybe we should drop the maximize feature in favor of being able to grab the upper two corners for custom sizing? 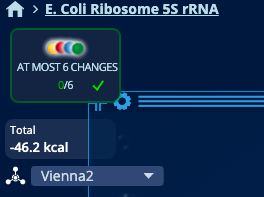 Totally blown away by this amazing leap forward for Eterna!! The pan, rotate and zoom function are awesome as is the ability to have the entire 3d box unlocked and draggable to anywhere within the workspace! Bravo!

reset bombed on me - chrome

The NT’s change but the structure doesn’t - I think we discussed this and structure wasn’t going to - correct?

maximize runs into the criteria boxes upper LHS - can not reduce again due to hidden button.
Ha - you can reduce with RH arrow in 3D box - guess OK.

WRT reset: We’re aware of the crash, and have a fix pending

WRT 3D structure not changing: That is by design, we have no way to predict a useful predicted 3D structure currently

The help button has some new icons that are not identified.

chat box bottom is hidden in main window sizes other than maximize.

I’m currently testing out the 3D capabilities with the puzzlemaker. Long story short is that the process is pretty smooth in puzzlemaker, but at this very instant the 3D interface doesn’t carry over to the actual puzzle (which will be patched soon).

For testing purposes, I’ve chosen a relatively simple RNA structure that I happened across: https://www.rcsb.org/structure/5UF3

I’m planning on doing a more extensive write-up on a Google Doc (Eterna3D_Puzzlemaker_tutorial - Google Docs), but here are some screenshots showing the key points of the process (feel free to replicate/test): 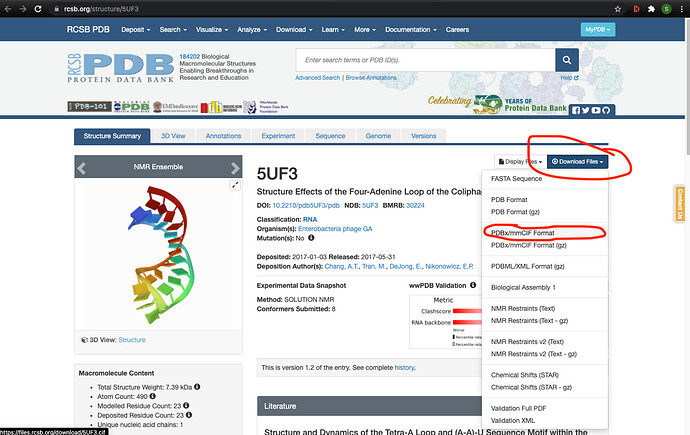 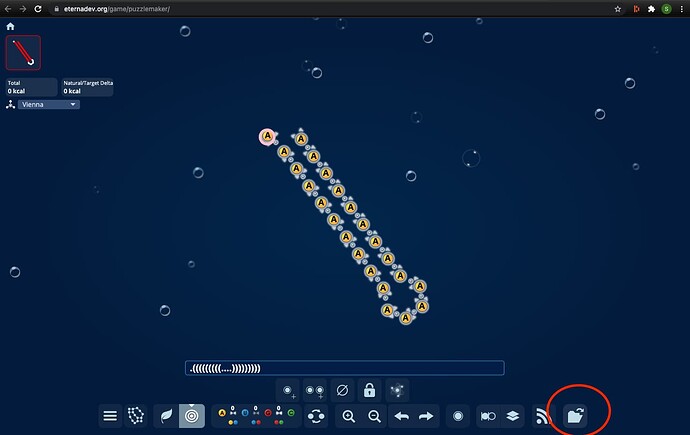 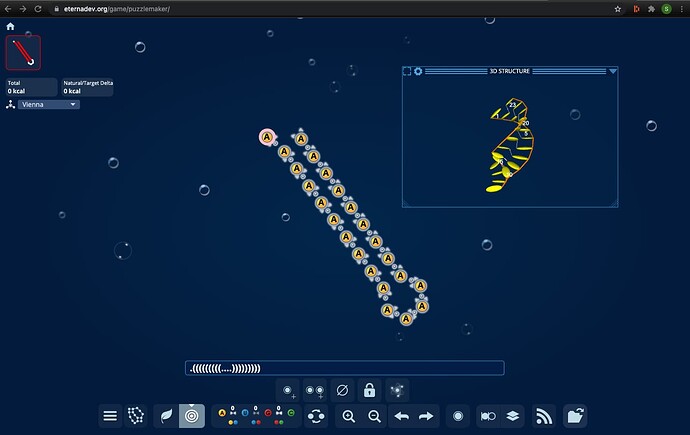 Aside - I had to upload the .cif file again once I fixed the dot-bracket notation (to match the actual structure) in order to get the updated pairs showing on the 3D structure. 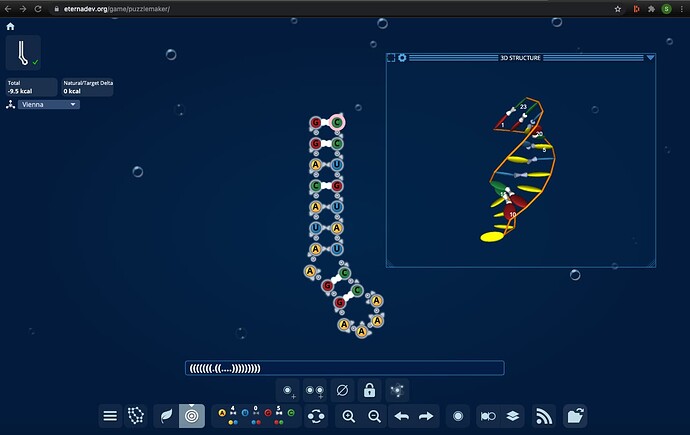 Big thumbs up to Pragya and the rest of the devs who have been contributing to the new 3D view!

I have two suggestions for the visualization details that I think would be easy to make. The first is how the basic distinction between purines (A’s and G’s) vs pyrimidines (U’s and C’s) is rendered. Having the visualization show this distinction is significant because it goes a long way toward visually showing why all the standard base pairs consist of one A or G paired with one U or C.

5S 71-105 pair (Eterna 3D).png124×631 29 KB
The easiest way to describe the difference between purines and pyrimidines in words is that purines are larger than pyrimidines, and the current visualization suggests that – the rendering of the bases shows a purine to be “bigger” primarily by making it fatter.

But all four of RNA’s nucleic acids are flat (i.e. lie in one plane) and have the same thickness. The two groups are distinguished by the fact that purines are “longer” because purines have a second ring of atoms that pyrimidines lack.

I like to use the Chimera application for viewing RNA 3D structure. It provides a lot of choices for how the RNA is displayed, though none of them correspond to our new one. But here’s a visualization that renders the nucleic acid part of the RNA as rectangle (with bumps indicating a ring) instead of an ellipse, which is close enough.

The “size” of the nucleic acid is indicated by the length of the rectangle, so pairing one purine with one pyrimidine results in a (more or less) constant distance between their respective backbones. If each different pair resulted in a different distance between the backbones, a stem wouldn’t form the nice spiral that we associate with RNA (as well as DNA) . A tweak of our ellipsoids’ parameters could reinforce that significance of the length.

The second suggestion is to tone down the white “cones” that represent the bonds between the two bases. As it stands, they seem more “solid” than the bases themselves. Perhaps some combination of changes in lighting, intensity and/or transparency could make them stand out less, while their size could remain as an the indication of their strength.

Can the selected view be soft coded so that choosing one style now doesn’t preclude having a choice available in the future without a lot of redo-programming to make things fit. Until given a mission,
I have a very vague idea how I might use the app or what I should be looking for. 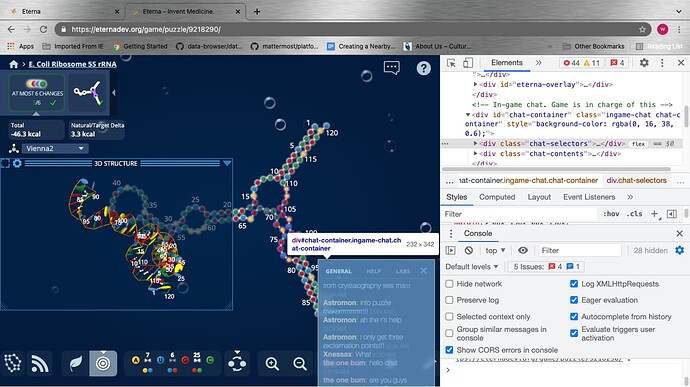 I’m using Chrome browser, maximum size. The chat window extends below the game window.
I’ve highlighted the chat code in devtools. Hope that will help chasing down the problem.

I got tantalizingly close to creating a 16S model in puzzlemaker, but couldn’t publish because the puzzle isn’t solved. It sure looked cool. The cif file is 18MB. The molecule is 3J9Z. Got the dot-bracket notation from RNACentral and the sequence and cif from RCSB. 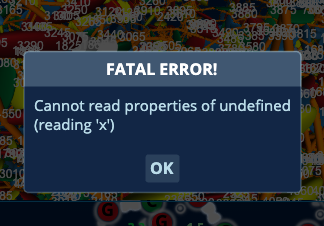 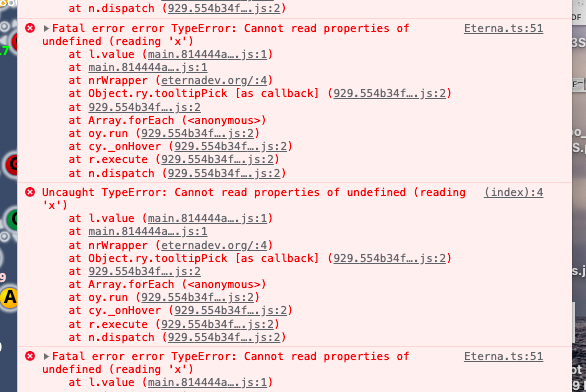 Beyond the testing of the functionality, I’m curious what the vision is for players uploading cif files in puzzlemaker. I gave up on trying to model natural molecules in puzzlemaker because when the sequence and dot-bracket notation are loaded, they don’t fold into their natural state with Vienna 2 or EternaFold (LinearFoldE) and therefore are not solvable and publishable. The sequence can be altered to make the molecule solve, but then it no longer is the model organism. Still fine to use as a fun puzzle.
One more image for fun. Note no bonds. 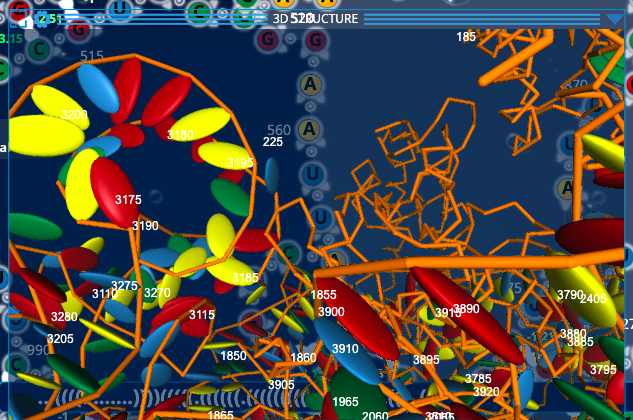 If it helps I got time to kill a while ago

@BugacMan - Did you mean for the solution to be so grid-like or is that how the final solution turned out?

Beyond the testing of the functionality, I’m curious what the vision is for players uploading cif files in puzzlemaker.

There are lots of structures worth exploring with 3D models. What has me scratching my head is what players are supposed to do after loading a sequence/dot-bracket/cif of a naturally-occurring molecule into puzzlemaker and it can’t be published. They will have to change the sequence to force it to fold in one of our models. For me, that diminishes the value of that puzzle. I don’t want to give players inaccurate information. I’m failing to see the point of saying, hey, look at this cool tRNA, let’s look at the structure in 3D, oh but this isn’t the real sequence.

My vision for the 3D model is for use in lab puzzles, which is totally doable with the current setup (if I can find a cif file, which is a big if). I haven’t heard anyone discuss that we would also like to load 3D models into player puzzles but most likely we won’t be able to use the original sequence in order to make it publish. I’m not comfortable making a tRNA tutorial where the lesson goal is to solve the puzzle by designing a false sequence. Maybe we need a third category of puzzle that can be used for loading natural molecules and tutorials.

In the future, the goal is for full parity between features in the puzzle solver and the puzzlemaker. This means that you could change what the criteria for “solving” is (for example you may not require satisfying the 2D structure to solve the puzzle at all, or you may mark “don’t care” regions). I would not be surprised if at this point the use of 3D structures within player puzzles is contrived (as-is since we only have 3D “target mode”, the 3D structure is only really useful as a reference and has no direct in-silico gameplay impact anyways).

Also to note, we will be supporting PDB, but that patch just hasn’t landed yet.

The other criteria could be EA or EternaBot or some new metric we discover. Or Identify the Motif, that could be fun.

The problem I’m running into with cif/pdb files is that the researchers who generated the file rarely are looking at one distinct RNA molecule in isolation. All the 16S files I’ve seen so far (except for the one Andy provided) include proteins. I tried working with a RCSB entry that contained an amino acid as chain B and the tRNA as chain E. I loaded the tRNA dot-bracket/sequence into puzzlemaker then loaded the cif file on the off-chance the code would be able to recognize chain E only. It did not work. I don’t think pdb will behave any differently.

The next option that could be tried is loading the cif/pdb into Chimera and seeing if chain E can be exported individually as a cif file.

I recall reading that one of the kaggle solvers used a script to run the RNA sequence through RNA composer to then get a simulated structure back. (Which was then put through chimera) What if such a structure could be shown in eterna? By using a script to gather the simulated structures, for eg. player puzzles and lab solves. Basically this will give us the native structure too.

All it would need would be for eterna to accept to show structures that are unstable, which you also point out that many natural structures will be. The original 5S ribosome puzzle in lab was shown in lab, despite it being judged unstable by the folding engine from the start.

Andy felt that no current automated 3D solving software (including RNA Composer) could (reliably) give a realistic enough result in a short enough amount of time to be useful as a natural mode.