Hi. It appears that there may be a bug with the “great pairing” effect. 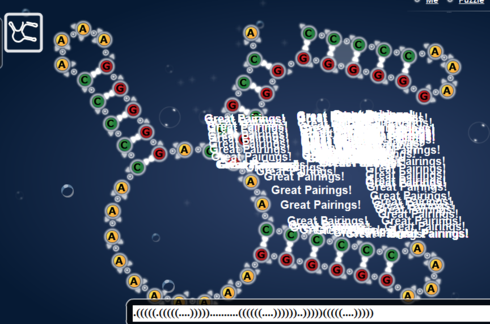 It first appeared while I was working on building a puzzle offline. Then I reconnected, as I assumed it may have just been a problem with the page needing to be refreshed. However, the problem has persisted. I do not know if this problem is localized to my system, or if it is an issue with a specific structure in the game, but it appears it may be related to the energy calculations, as switching the target to an alternate natural mode appears to reset it. Even after this, the problem will persist, with the great pairing effect being spammed, and the browser window slowing to a crawl.

On an unrelated issue, when offline, error message #2032 pops up saying that the connection to the chat server is severed. While not particularly a problem, it can just be frustrating when one is trying to solve a puzzle offline, and the error message continues to appear. Of course, I could be the only one who does that, and is definitely not something of high priority, as I currently have a temporary fix for that.

Thanks for the game

I noticed the IO error last night. It doesn’t seem to impact gameplay, and I’ve only seen it once.

Not seen the “great pairing” effect.

The great pairing effect has actually happened twice to me, but both times started offline, which is why I am partly assuming that I can no longer build puzzles offline. I guess that is only a partial hindrance though, as it just means I can no longer spend the amount of time I usually do perfecting a puzzle and determining what the right number for the requirements should be.