How strong is hydrogen bonds compared to backbone between two nucleotides?

According to this tab;e, the dissociation energy of a single P-O bond is about 148 kcal/mol, while the combination of stacking and H-bonding is much lower. For the duplex GG / CC, it’s 3.3 kcal/mol.

To rupture the P-O bond and do nothing else, you would have to add about 148 kcal/mol. To melt the duplex GG / CC, you would only need to add 3.3 kcal/mol. Bond energies don’t tell the whole story, though. In a chemical reaction that breaks the DNA backbone, multiple bonds are being broken and formed. If the overall change in free energy for the whole reaction is negative, the reaction will happen spontaneously. How quickly it happens is another question entirely.

Nucleic acids are actually unstable to hydrolysis, but fortunately for us the reaction proceeds so slowly that our genomes don’t disintegrate the instant they see water. 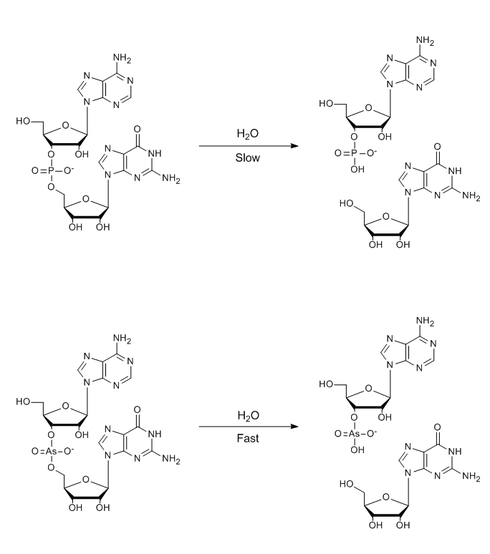 The bottom reaction is much faster, even though the dissociation energies of As-O and P-O bonds are similar and the hydrolysis of arsenodiesters / phosphodiesters has a similar, negative change in free energy.

That was the answer I hoped for. It just gave me one more reason, why the neck area is special. Here is why.