So well doing my first draft of results on our current lab shape.
Found a lot of re-occuring sequences, which isn’t a bad thing.
Makes for very good comparisons

Anyways, below is a table for those of you so inclined of differences between the current scoring system based on similarity. And other designs to keep an eye on. 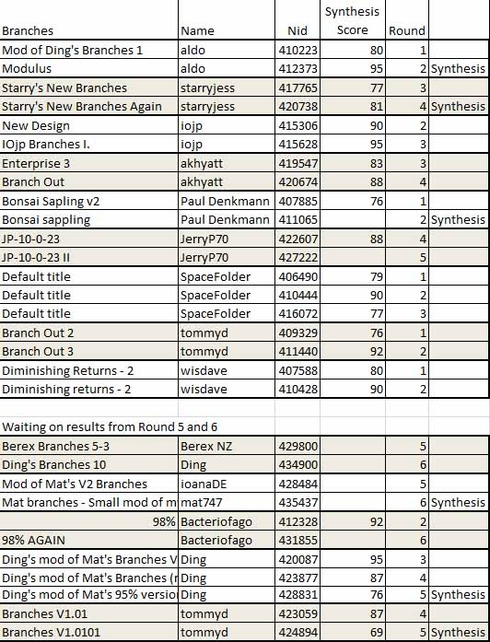 This has been assigned task # 468 - we’ll fix it before round 5 rewards are distributed.

Hi Berex, this issue has been fixed - let us know if you find any other problem!

Followup, just looking at the revised. 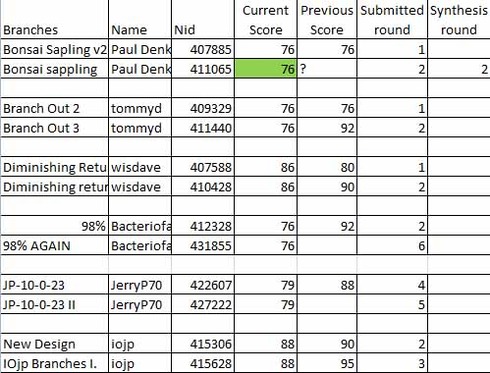 Can you please confirm that Paul’s design synthesis score was 76%, seems odd that he’d score identically to his previous?

The rest are scores I’m just wondering how the conclusion was reached.
tommy d design scores, should be 92?
wisdave should get 90 per each of his designs?
How did bacteriago get 76, down from 92?
JerryP70 went from 88 to 79?
iojp went from 95 to 88?

A clarification would be appreciated.

Bonsai sampling turns out to be a glitch, as it’s result is not out yet, but got scored by the closest design previously. I’m working on fixing it.

The rest is correct.

The glitch has been fixed

The Bonsai sampling v2 now gets 88, since it’s closest synthesized design with result is Ding’s Branches 6.

The Bonsai sampling has empty score, since it’s result is not out yet. Its’ bit weird that v2 got 88 despite being the same sequence, but again, we had to reward v2 something so the system took the score of Ding’s Branches 6. I want to emphasize again that the closest solution scoring does not reflect the actual value of RNA, it is a rough heuristic we use to reward everyone for participating in the lab.