I would like a strategy for designs with asymmetric multiloop.

So I would like a stragety for designs with multiloop with uneven numbers of nucleotides between multiloop arms.

Penalize highest if a gc pair in the multiloop, other than in the neck, turns opposite, the more nucleotides there is between multiloop arms.

Eg. The asymmetri lab. Here the nucleotide distance between multiloop arm is 2,3 and 4.

Here is Penguin’s Taipan (100%) from the asymmetry lab with explanation: 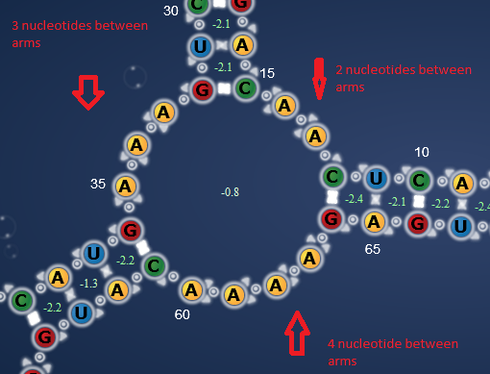 This is the missing strategy for market stategy nr. 23.

I now suspect that it is the two and bases between the stems, that causes this multiloop to behave more relaxed when it comes to orientation of GC-pairs in this multiloop. There seems to be less of a penalty for opposite turning GC-pairs in bigger multiloops. For more about this read here.