Maybe 2 SHAPEs are better than just one...

It inspires me a silly question: looking at the structures and the sizes of the reagents, I have wondered for a long time whether they would possibly have a stacking potential with nucleotides. The paper mentions very clearly how 1M6 does indeed interact by stacking. I don’t know what makes 1M6 and 1M7 different, but considering the naming, they sound like they would be quite similar, so could it be that 1M7 also has such a stacking tendency? And could this explain some of the artifacts we often see at the closing pairs of stacks in current Cloud Labs?

Other than that, is it conceivable that this double-mapping technique may be used in EteRNA in the future?

As Rhiju mentioned in some other forum post, they actually did run the designs of the first round of the Cloud sequencing with 1M7 and NMIA (as well as DMS and CMCT).

If you wish, you can analyze the data

I thought I had seen that paper linked somewhere previously…

I guess I missed that thread… That doesn’t invalidate my questions though, which I don’t see answered in that thread.

Also, do you think that we should be the ones coming up with an algorithm for a “consolidated SHAPE map” which would integrate both reactivities? After having taken a good look at HiTRACE and at other procedures used in other papers and experiments, I tend to doubt that I could ever come up with anything making any sense…

I don’t know how enlightening it will be, but I decided to look up the chemical structures of NMIA, 1M6 and 1M7. 1M6 and 1M7 can be viewed as derivatives of NMIA (aka N-methylisatoic anhydride), whose structure is this: 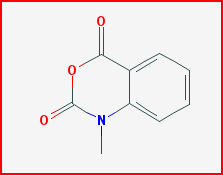 Compare this with the 1M7 structure in Figure 4B of http://www.chem.unc.edu/rna/pdf-files…

and the 1M6 structure in Figure 4 of http://www.ncbi.nlm.nih.gov/pmc/artic…

(You may want to refer to the original for the 1M6 structure graphic. The distinction between the 1M6 molecule and the RNA base is made clearer by the context.)

Both 1M6 and 1M7 add an NO2 group to the benzene ring, but at different positions. (In 1M7, the NO2 group is diametrically opposed to the O in the other ring. In 1M6, it is offset one position.)

Unfortunately, for every chemical probe added, the number of designs to sequence increases, with an increase in noise and a decrease in overall accuracy and clarity. Otherwise, they would probably use several SHAPE reagents, as well as 50+ other chemical modifiers

Then, you have to be able to prove it is necessary to use multiple modifiers, especially since we would not be able to determine if the difference between nucleotide reactivities is due to tertiary interactions, noise, or differences in the chemistry of the probe.

Plus, the Das lab is working on developing other methods for chemically probing the tertiary structure in RNA, although, it is labor intensive and time consuming.

K. Weeks’ lab seems to have been able to sort it out…