During yesterday’s town hall, we reviewed the results of the folding algorithm tests performed by Hannah and the Das Lab that found EternaFold to be the top algorithm for predicting loops and stacks in secondary structure. The results also found Vienna 1 to be the worst as you can see in these graphs of the results. The first graph demonstrates why the researchers chose to use ContraFold as the basis for EternaFold, and the second graph shows how well EternaFold performed across diverse datasets. 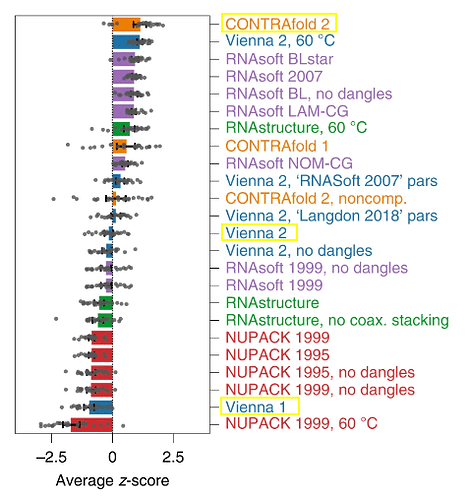 The Dev team is considering making EternaFold the default engine for player puzzles to reflect the superior performance of the newer algorithms and to help players stay current with scientific progress.

A related change we are considering is whether to update the algorithms as new versions become available. The potential problem is that a few player puzzles may no longer be solvable if we update Vienna 2, for example. (We probably would not update Vienna 1.) But instead of viewing it as a problem, we can view it as a new game element. What changed in the update? Why is this structure no longer solving in Vienna 2? What can we learn? Players can make a new puzzle that is solvable and comment on what has changed. Plus players will continue creating a whole new crop of puzzles.

As developers are rewriting the website and potentially adding new game elements, it’s a great time to move our technology forward and rethink how we use game elements in fun new ways. Please share your thoughts!

I am all for the change. It will however make the point rankings obsolete
since many puzzles may not work or are more difficult with a folding engine upgrade.

As for the 2 state and 3 state switches in Puzzlemaker, we don’t see a switch version of EternaFold on the horizon soon. We can leave Vienna 1 as the default or change to Vienna 2 as the default. Vienna 2 performed slightly better than Vienna 1 in the testing but the difference is small. I don’t know how well the aptamers (FMN, theo, and tryp) used for the testing compare to the puzzlemaker aptamer other than they all have an energy bonus of 4-5 kcal. 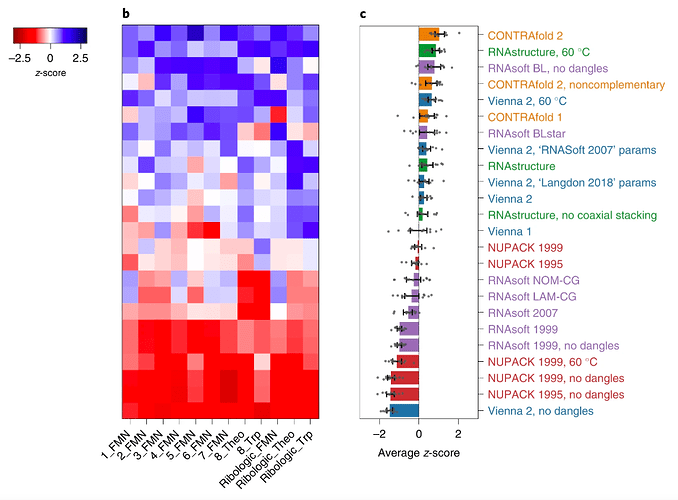 I also don’t know if the newer versions of Vienna 2 have code changes that would affect switch prediction.