My top 3 feature requests. What are yours?

Suggestions I feel need to be at the top of the list:

I’m not much of a hard-core player, so my list may be different…

Hi LFP6, What does “Interactive screenshots” mean? Could you explain more about that? Thanks

I would trade my #3 - map enlargement in puzzle maker for the following, I think.

Mentioned this in last dev chat. Being able to save a screenshot, and have it loaded as a puzzle with all progress upon clicking the link.

I think the limit was deprecated, or will be.

Here is one of my feature requests.

It was Omei’s tool with data errors, that made me realize I would wish for being able to turn on visualisation of error rate directly ingame in the design itself. Just like we can turn on and off continuous SHAPE colors.

(The red rings should of course be nicer than here and be gradual, than these pictures)

Nando I agree, can’t wait for the day that they’ll improve the graphical interface so that we get a visual sense of these factors (errors, threshold, etc) as well.

Eli: Yes better graphical interface, so we can see more of the data that we actually got, will be beautiful. As you say getting a visual sense of these factors will help greatly on understanding the behavior of the data. The better we see and understand the data, the better work we can do.

We can learn to do it the other way too, but it just takes much longer time that it has to. 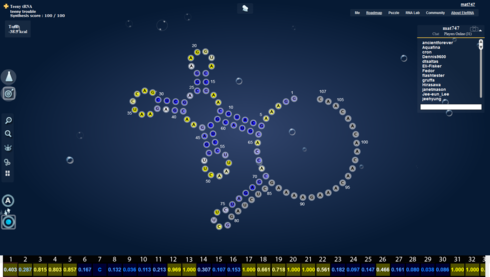 The line of SHAPE numbers is taken from Omei’s Lab data mining tool.

This addition will give us the ability to see the SHAPE numbers alongside a design. It will give a better sense of the numbers, seeing both design and numbers together. For now all the numbers are collected in one big file chunk for each cloud lab in the Stanford RNA Mapping Database (RMBD). Getting an option to see the numbers in game, along with the design they belongs to, should give us a better feel for what is normal or not normal and why.

This option should be turned off by default, to not confuse the newer players. The number of decimals needed for ingame viewing could be discussed. For viewing in the ingame display, 1 or 2 decimals would suffice as the numbers then could be displayed better on screen and if one wants the more accurate numbers one would be able to get them from the Omei’s tool or from RMDB. It would be great if it was an option so one could choose how many decimals one want to display.

Then one could easily see if they were stable in their surroundings.

I have regularly watched the sequences in the lab interface and wished for that I could see which of the single G’s and U’s were actually involved in a GU-pair, without having to look at the design. Simply to get an idea of the overall more optimal placing positions for a whole lab at once

First I was thinking about having a second line below, with only the base highlighted that I was interested in. Then I remembered Mat’s fine switch pictures with the added circle colors. Where one can see the other state as rings around the bases it is paired up withæ. I think it is from before we got split screen viewing option. 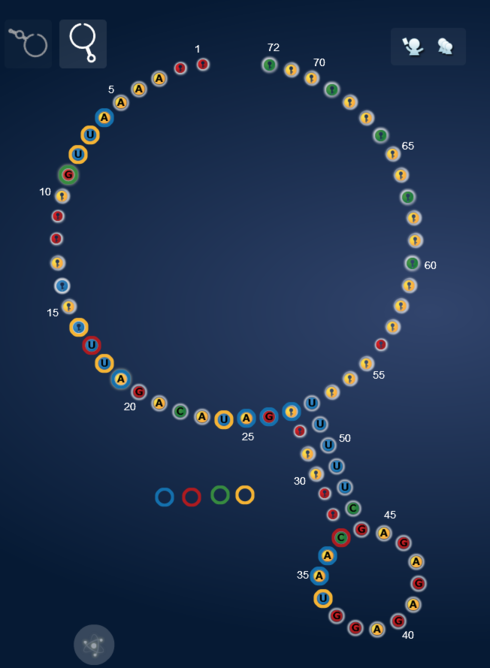 So instead I just wish for a small colored box around the base that is paired as a GU. If the base is G, then a blue box for the U and opposite.

As is we can only see one base at a time, but focusing on particular basepairs and in more design at once, will speed up things and make visible other patterns.

It will be very helpful to dig out GU and non-complementary patterns. Like UU’s, GA’s, CA’s and so on. It will help us hunt down orientation and good placement for them.

I even think it could be useful for watching modified bases later. When we are having special bases in.

As for now I use the GU% column to see which designs have GU’s but i can’t see overall positioning. without watching the individual designs

It isn’t perfect. as a GU will be marked twice in a sequence. For both U and G. But it would greatly help us seeing which positions are better and in what kind of structure. And see more than one design at once. In particular if we can see it in the SHAPE data too.

However I got inspired from Omei’s tool, and one could specify orientation like GU or UG. And then only one of the bases have to get a colored box.

Here are wishes, that would be helpful in relation to the marker:

Eli Fisker: I will say that the new marking option helps
Zanna: I know, Eli… I love that tool
Eli Fisker:

Zanna: another color option on that would be helpful
Eli Fisker: That too
Eli Fisker: And the option to delete the rings after one is finished with using them. But i already mentioned
Zanna: yeah, a key for remove ALL

Even more suggestions for the puzzle marker

(Chat from the discussion yesterday, edited down)
Eli Fisker: Just sort them after number of solvers and have a go at them
Zanna: yeah, just need more practice, Red, and with the highlight tool, they are easier
Eli Fisker: Yes, the new highlighting in all states makes them easier
Zanna: sure does… just need a second and maybe third color
Zanna: 2 is probably enough
Eli Fisker: Yes
Eli Fisker: And I’m still kind of fond of the idea of having the option of the ring removing itself as I place a new
Eli Fisker: That will be really helpful for daily solving
Zanna: I need to leave a bunch of them in place sometimes
Eli Fisker: For more advanced puzzles, leaving those in one chooses, will be best
Eli Fisker: So what about we mix our ideas
Zanna: I’d rather have a “remove all” button
Eli Fisker: Ok, that will be useful too
Zanna: Eli, maybe it could be so that the newest highlight will have a different color
Eli Fisker: That is a great idea too
Eli Fisker: I actually think that is real good
Zanna:

Eli Fisker: As one gets more and more highlight, locating the latest is harder
Zanna: yep
Zanna: I usually click it again and again to make it blink so I can find it LOL
steven123505: lol
Eli Fisker: Me too

Eli Fisker: I have become better at locating it, but I’m still having trouble
Zanna: I often have a dozen or so highlights at once, so I know what you mean

Zanna: newest one could be highlighted in red or something easy to see, blinking maybe

Eli Fisker: Yes blinking or pulsing can work too
Zanna: yeah
Eli Fisker: And I like the red idea
Zanna: not sure how that will show up against a red nt though
Eli Fisker: However for labs I want my rings to be black. I don’t want red highlight in my explaining pictures
Eli Fisker: So I think we need to have different options for highlighting.
Eli Fisker: We still need the all black ring as an option
Zanna: blinking purple for newest, perhaps
Zanna: agreed
Eli Fisker: Purple will easier dissapear on dark blue
Eli Fisker: Red will shine
Zanna: even against red nt?
Eli Fisker: ah, no
Zanna: I guess if it is blinking it will show up
Zanna: how about brown?
Zanna: or orange
Eli Fisker: Orange is fine too
Zanna: maybe just black, and pulsing grey
Zanna: gray
steven123505: how bout we can change it?
steven123505: they give us options
Eli Fisker: I like that option too