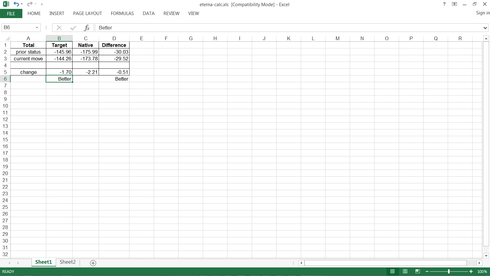 I can vaguely see how this could be useful while solving a certain class of player puzzles. Our challenges would most likely never require this tool.

While designing for labs though, I cannot really see any added value in this information set. The lab puzzles never require to overcome a positive free energy, and I would rather not see an automatic ‘better’ mention for all negative improvements in free energy. Too much stability is no better than too little, and it seems to me that this would actually invite players to derail in the direction of Xmas trees…

Unless someone can convince me of its potential usefulness in labs, I can only put this on my todo list with a rather low priority at the moment. The good news is that I will be able to take it into account while building the code infrastructure for other goals and features in preparation. It may be a while though…

This reply was created from a merged topic originally titled Display difference between natural and target folds.

So I’m working on a switch puzzle, right? They’re hard, yeah. but it’s pretty cool how I got one state to fold, and the second state… to fold into the first state. Difference between states is only a few kcal. The thing I would find VERY helpful is to simply see the difference in energy between the target and natural states. This way, when I make a change, I can immediately see if it’s getting me closer to making the target the optimal one, or if I’m just giving the sub-optimal more strength. Would work nicely in single-state too.