EteRNA dev team had a long discussion about how EteRNA will change with the new high-throughput synthesis pipeline. Here are the details about the new EteRNA, which is temporarily called EteRNA 2.0 ~ Cloud Lab~ (If you have other ideas for the name, let us know!)

The new EteRNA 2.0 ~ Cloud Lab~ website will be focused around a concept of “roadmap.” The roadmap lists list of things you can clear and learn in an orderly fashion - so that the new players can simply follow the roadmap to become EteRNA experts. You may have seen similar concept in many other video games, or websites like “Khan Academy”

Each node (or a stage) in the roadmap will have associated conditions and rewards which can be points, badges, and sometimes unlocking of game features.

i) Game & Puzzles : This is a part where you focus on learning basics of RNA folding, clearing challenges, making puzzles. This zone will embrace tutorials, challenges, and player puzzles.

ii) Cloud Lab :This is a part where you really get into player lab (or player projects) and rna synthesis. This zone comes after “Game & Puzzles”

This zone will have extensive nodes (stages) that will walk you through from participating in other players’ projects to creating your own project and succeeding on it.

iii) Paper & Publication : This is a zone which you can access when you have at least 1 “successful” player project. Stages in this zone will walk you through to create a scientific write up of what you discovered in your project. The write up will be published to “EteRNA Library” which will be an archive of all researches in EteRNA. Also, a few very good write ups will be encouraged to submit to scientific journals - (more details on cloud lab section)

iv) Bot Factory : This is still in discussion - but this part will focus on beating bots like Vienna, InfoRNA and RNASSD as we currently do in player puzzles. Furthermore this zone will focus on creating a new algorithm from “Player scripting interface” that can beat all other bots.

“Cloud Lab” is another term for “Player Projects” which will replace the entire lab section. Unlike current lab section, in which we developers propose one challenge at a time, players will propose their own lab projects and use up to 20,000 synthesis slots.

Any player who’s about half way through the Cloud Lab Zone will be able to propose a project. There are several things the player will have to prepare, but the most important thing is a “hypothesis” the player wishes to prove with the project.

A hypothesis should be a clear (and brief) statement that you want to test with your project. 1 good example would be “RNA won’t fold successfully if it has more than 90% GC pairs.” In the project you (and participants) will focus on proving that the hypothesis is true (or false)

An active project can be finished in 2 circumstances. a) P.I (Principal Investigator, the project proposer) declares the project done. P.I moves on to “Paper and Publication Zone.” b) The project have been inactive for a certain amount of time

iii) Participating in a project & rewards

Any lab member can participate in a project by submitting a sequence. When a player submits a sequence to the project, he has to decide whether the sequence will “prove” or “disprove” the project hypothesis. For example, if a project’s hypthesis is “RNA won’t fold successfully if it has more than 90% GC pairs.”, you could create an RNA with 100% GC pairs and say that the rna will “prove” the hypothesis. Or, if you believe the 100% GC pairs RNA could fold successfully, you would say that the rna will “disprove” the hypothesis. You will get reward when your sequence is synthesized & the prediction is correct.

As for the synthesis slot allocation, we decided to give full powers to players themselves.

Beginning of every round, all lab members will get approximately [total number of slots] / [number of lab members] synthesis slots in their hands.

PIs of active projects, will get (possibly many) extra slots to spend on their projects.
These extra slots can only be spent on the PI’s project. Also, how these slots were used will be published. Technically, a PI could decide to spend the extra slots for only himself - but this will be known to all players. If offended players decide not to participate in the project anymore, the project will become inactive and get closed.

Every finished paper will be published to EteRNA library, which will be an archive of all EteRNA researches. This will be a public archive, and the author of the paper will be fully credited.

Eventually, EteRNA team will pick 4 best papers out of EteRNA library and help the authors to further polish the papers and publish to scientific journals. We hope to do this in 1 year from now. We’ll also encourage 4 authors to help other players in polishing their papers and researches - the goal is to open the opportunity of publication to every member of EteRNA cloud lab. 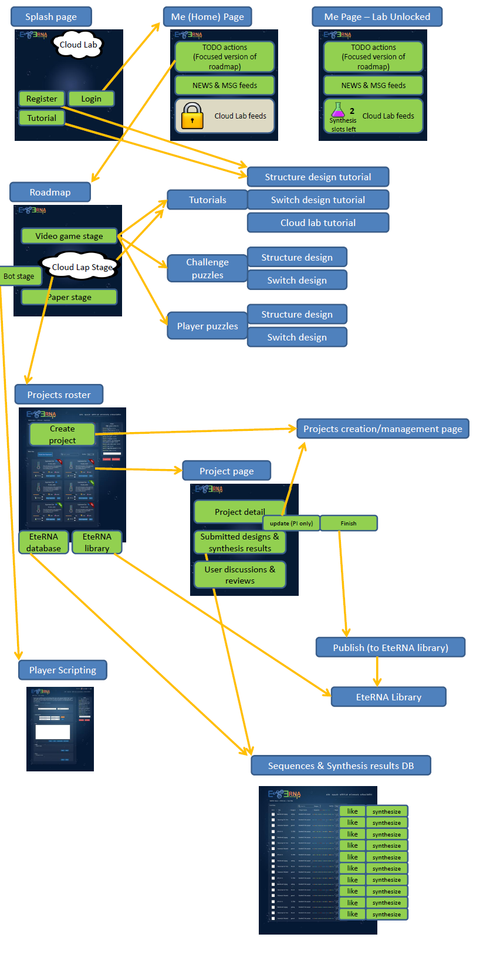 (How pages in the new websites are connected to each other.)

If you have suggestions or questions about the new EteRNA, please let us know!

For the most part this looks great. Thanks for all your efforts! There is one area that concerns me, and that is the allocation of synthesis slots, particularly when starting with just 1000.

“Beginning of every round, all lab members will get approximately [total number of slots] / [number of lab members] synthesis slots in their hands.”

This concerns me, because right now, there are far more qualified lab members than *active* lab participants. Right now over 2000 player have >10K points, unlocking the labs. And if starting with only 1000 slots, that means only the top 1000 players get 1 slot each per month. But how many of those would really get used??? Most players with lab access don’t use it.

For the current switch lab, 41 players cast a total of 190 votes on round 2. With 20 labs and 1000 slots that is 50 slots per month per lab. Each of those 41 players could use over *20* slots per month or 10 every 2 week lab cycle and still not fill the initial 1000 slots; and what happens when there are 20x more slots? I guess the hope is that more players will participate in labs if they are guaranteed a slot.

“PIs of active projects, will get (possibly many) extra slots to spend on their projects. These extra slots can only be spent on the PI’s project.”

This may help. If the balance of unused slots in each interval (2 weeks?) fall to the PIs and they get to rank (in advance?) the submissions to their projects, then they could get an average of up to 25 slots per lab every 2 weeks to fill in their submissions based on recommendations or “likes” by participating players but ultimately at their own discretion.

However, a lot of player projects don’t get anywhere near 25 submissions. Maybe that will change is there are only 20 active “cloud labs” at a time. But with 20000 slots, that would mean 1000 submissions per month per lab?! Once again, you must be hoping that more players will participate if guaranteed synthesis slots. And maybe they will.

We assume this will involve some trial & error. But we are planning to reserve a “redistribution” period for few days right after a round ends. Within this period, we’ll distribute unused slots to active lab PIs, and also active players. We even think maybe we can put these slots in an auction where the active players can buy the slots using game points. Or maybe these can be rewarded to active players (10 slots to active puzzle makers, 10 slots players who have been helping new people a lot, etc…)

Yes - we do hope and presume the active player will increase as the opportunity of synthesis increases. If that does not happen, then more slots for active players : ]

I like the idea of active players getting more. May be if you participate in a lab/project you get more guaranteed slots the next cycle? I’m not so fond of a few day “rush” to (re)allocate slots at the end. What if the players/PIs that get them don’t use them? Do the unused slots get wasted? I’d prefer a system where submissions are pre-ranked in some way and the distribution happens automatically.

I’m not at all sure about the idea of “buying/selling” slots. But then I’m not a big proponent of the free-market.

Are there any new details that you can share with us

you can keep track of our work at Eterna github repositary
https://github.com/EteRNAgame/EteRNA-…