On RNA switches and how do aptamers bind?

Brourd and I were discussing aptamers. And we have a couple of questions. As Brourd summed up:

Why did you choose one side of the aptamer loop to be in the hairpin stack? (The one strand with the locked nucleotides)

Also I’m not sure I understand how aptamers bind up. I think the bigger side of the aptamer looks more available. The side curving outward, having one more nucleotide than the other. But I’m not sure. How does an aptamer bind up?

It also occoured to me that it might actually bind up as a ring, so now I’m confused in 3D

FMN stacks between/pairs with the base pairs in the loop. The 6-5 loop in the binding site contains some unusual base pairings that aren’t depicted in EteRNA, but you can indirectly see them in the synthesis data where loop bases sometimes appear blue. FMN has a flat 3-ringed structure one edge of it contains the same arrangement of H-bond donors/acceptors as uracil. 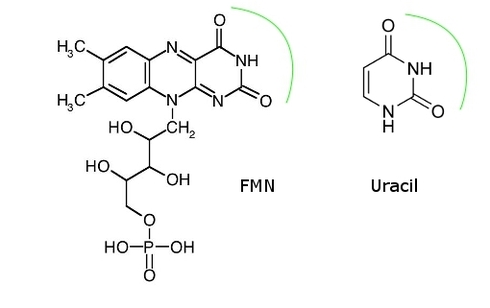 Here is a picture based on the NMR stucture of the basic FMN aptamer. At the right, I’ve only colored in the locked closing pair. I imagine it’s required for FMN binding. We never did get binding results back from the one lab where this base pair wasn’t locked. Some the bases in the binding site seem to stack with it, and the “flipped out” adenine in the binding site might interact with it as well. 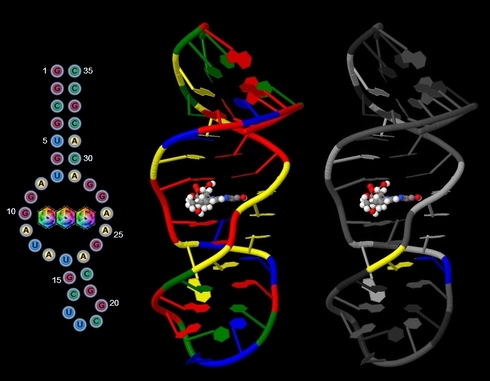 Now I can actually see in my head how it binds up. Which is much better than my previous state of mind.

It would sill be nice to hear from the EteRNA team why the bases were locked, and what happened in the first aptamer lab. I’ll try to remember to ask Jee if I run into him in chat.