Here’s a thread to discuss mRNA vaccine design transferring our understanding of the B.1.617 spike sequence to the Delta variant (B.1.617.2).

Good idea to have a thread like this. I imagine some very interesting conversations will happen here.

The non-pseu lab we have to tweak is out! The pseu lab and the leaderboards are probably going to come out tomorrow!

Can be used for voting guidance.

Just to flag for Eterna players curious about the sequence … there are several variations on what the"Delta" sequence is – in fact the WHO definition is slightly different from the U.S. CDC definition.

Eterna devs made a spreadsheet here to compare across various sequences we found – What's the Delta sequence? - Google Sheets

Note that we chose the chose the WHO definition as we felt it was less US-centric than CDC.

The changes compared to the original sequence are:

Let us know if you see alternatives for B.1.617.2, and also to discuss pros and cons of testing these mutations.

Thanks Rhiju for the info!

I was discussing the sequences with Rhiju. I share our discussion in the hope it may spark other ideas.

rhiju das: are you sure? I looked at the sequence definition for the lab and I see K at 478. Please double check if you can. Note that there are two deletions, which can be confusing with numbering. Inside the lab, we’ve provided custom numbering that ‘skips’ at codons 157 and 158

Eli: I grabbed the amino acids from here: 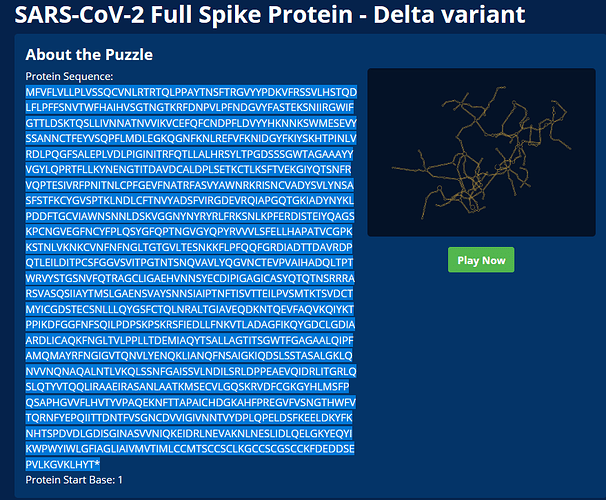 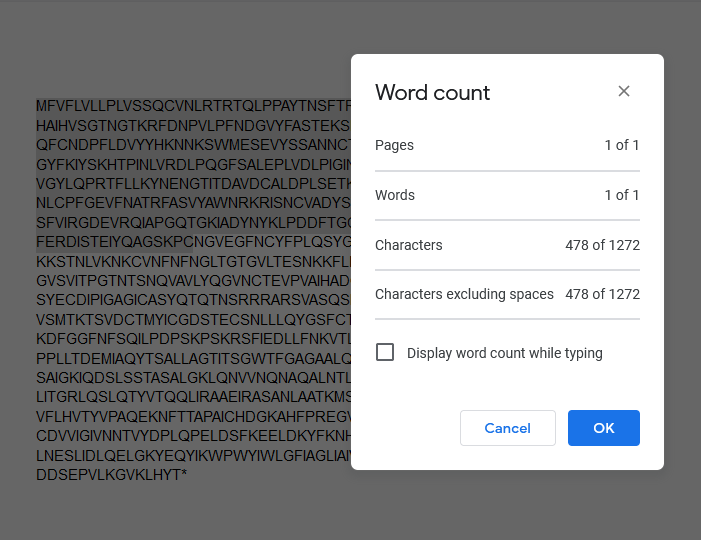 However you are right about the deletions. If I count 2 deletions, I would end up with a K

So I’m not sure I have found a problem. However I will still like seeing our current sequence in the document alongside the others, as this will improve your chance of getting useful input from us on if we would like to see some changes

Or if it is there, it marked so we are in no doubt that it is our current sequence

Eli: Got it and it has precisely 2 deletions. I’m happy.

Interesting that the deletions occur in the exact same area. Is this typical?

Ok, I can see that alpha and beta also have cases with deletions in the same spots. In one of the documents you linked in the spreadsheet (SARS-CoV-2 Variant Classifications and Definitions)

Not sure if what I suggests make sense

Since several of the mutations will be close in either amino acid sequence and potentially also in 3D.

And it will only make sense to have local areas that look exactly like a specific piece of a spike protein, so the right antibodies are made for it.

Now I wish to have a football protein globule with patches of areas from the 4 main variants.

I recall reading about antibodies from ebola survivors that were being tested to see which regions the antibodies were targeting. And there were specific regions where it was more likely. 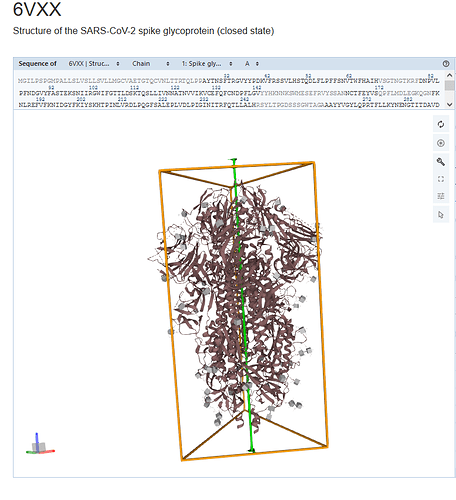 As a member of the wwPDB, the RCSB PDB curates and annotates PDB data according to agreed upon standards. The RCSB PDB also provides a variety of tools and resources. Users can perform simple and advanced searches based on annotations relating to...

The alpha helices being tentacles

rhiju das: yea, that approach — a few small regions of the different variants — appears to be Modern’s approach to their booster

Hey guys, I updated the cluster sheet to include both pseu and non-pseu now. Here it is again:

Oops. forgot to thanks @Eli_Fisker for also making the cluster!

In the transfer from the first delta sprint lab to the current delta quick sprint lab, the design with the longest half-life, dropped from 0.5517 to 0.5489. The earlier design went through a lot of modifications. The current one may not have been fully fitted perfectly to its new lab. I have the feeling it can be improved. What I’m asking is that some of you take my spot on the leaderboard with an improved design. Focus especially at the areas around the codon changes.

Here is a link to the design I would like to see improvements on:
Ucad, Merida, Jnicol’s booster, Jieux, arnuvmodh, JR, Aaron P etc

NB. Remember to work in Efold. Or work in Efold on a partial area with freeze turned on. I have described how to in this post: Awesome new booster by Jnicol - Half-life for partial puzzle

Hi, I was wondering if the design , Ucad,Merida,Jnicol’s booster, Jieux, arnuvmodh,JR, Aaron P etc., 1/2 life is .5389 or am I reading it wrong? Thanks

It looks like when the 1/2 life is calculated in the puzzle using LinearFoldE, it is 0.5389, but when calculated for the leaderboard using EFold, it shows as 0.5489.

You are reading the design absolutely correctly. It do say .05389 for the halflife:

Our lab uses the fast folding engine LinearFoldE. However here is the trick that Aaron P discovered in last round. Our leaderboard uses Efold. Which is much slower, but more accurate. And sometimes a design will score better in Efold.

Here is the same design in Efold: 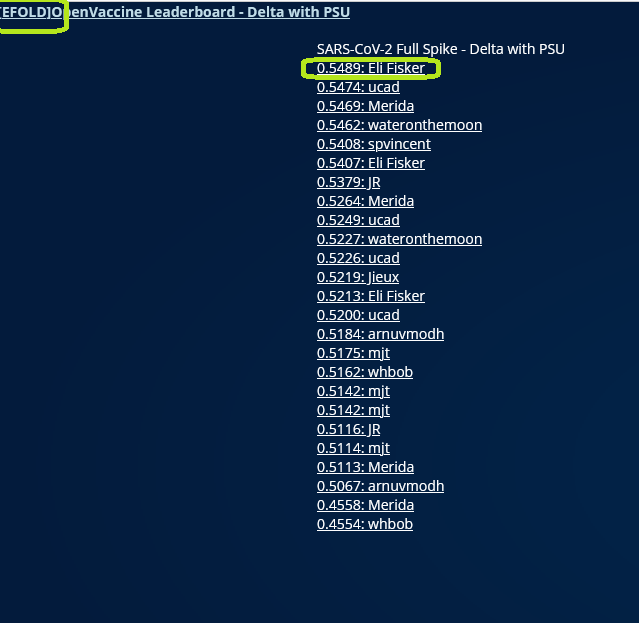 Here I have hid the codon chart and changed engine to Efold and voila a much better half-life. Most of it thanks to Aaron P:

Heads up, things will slow down considerable. It may take 5-8 minutes to load a base/codon change.

Well, thank you for explaining that. I was agonizing over it for a while.

I don’t think my computer can handle EFold today. It’s all up to you @mjt!

No luck getting EFold to load so am trying with LinearFoldE. 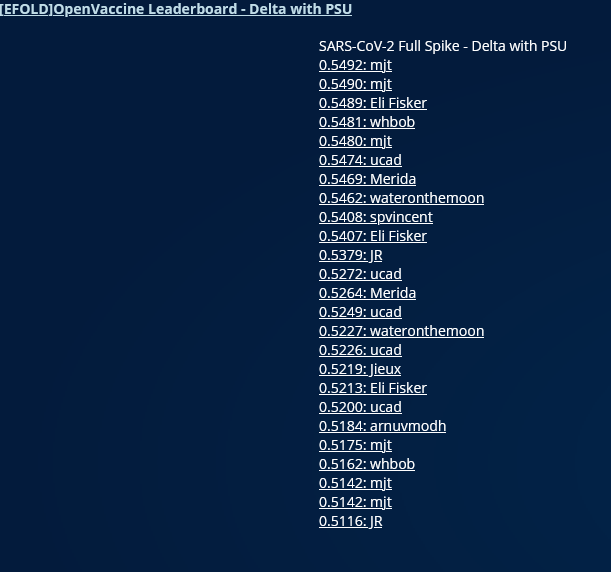