I’ve completed the first three levels towards unlocking LAB ACCESS, but now I cannot get any further cause the “Sequence” puzzle will not load…

I decided to try any available puzzle and found that in fact no puzzle is loading at all.

Any suggestions, help or feedback from the Dev’s would be much appreciated. Thanks guys.

I’m not sure what puzzle you’re referring to by “Sequence”. The fact that no puzzles are loading suggests to me that you may be affected by the upgrade to our graphics engine that was included in our release last night. This update requires WebGL to be enabled in your browser. Could you let me know what you see when visiting this page? https://get.webgl.org/webgl2/

If it says that WebGL is not available, it likely means that either you have hardware acceleration disabled or your graphics drivers are out of date.

With reference to your request, what I see when I go to the web-page link you referred to : https://get.webgl.org/webgl2/
I see a spinning cube with the number 2 on each face of the cube.

From what you said about the latest Eterna upgrade, it may well be that the temporary graphics card I’m currently having to use(NVidia GE FX 5200 128MB) is too old, and I’ve been unable to download the graphics driver for it, so it’s currently working off a standard Windows graphics driver, but it was working with Eterna prior to yesterday. I’m hoping to get back to using my normal Graphics Card this Wednesday.

But I would’ve thought that if this graphics card(NVidia GE FX 5200) can see the spinning cube in my Chrome browser then Eterna should still work, yes?

Hm, if you can see that then that shouldn’t be the issue… Could you do me a favor and check the development console for errors and upload a screenshot here? You can do that by pressing control+shift+i after loading the puzzle, then changing to the console tab:

Here is the Screenshot you asked for - This is a screenshot of the screen that appeared after clicking the “Next Puzzle” button. 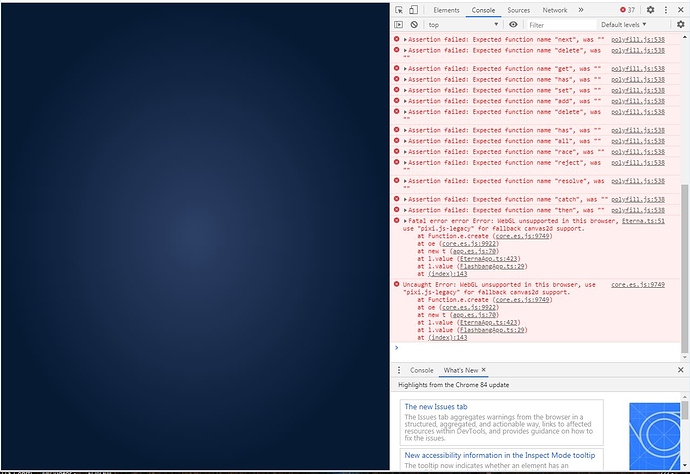 Interestingly enough, my initial guess was correct - somehow it isn’t able to use webgl, even though when you visited the other page it said you had WebGL enabled.

Out of curiosity, does this page also show a spinning cube, or does it say that WebGL is unavailable? https://get.webgl.org/

It’s still saying that my Browser is able to use WebGL, except this time the spinning box has no number on the faces… Here’s a screenshot of what I see. 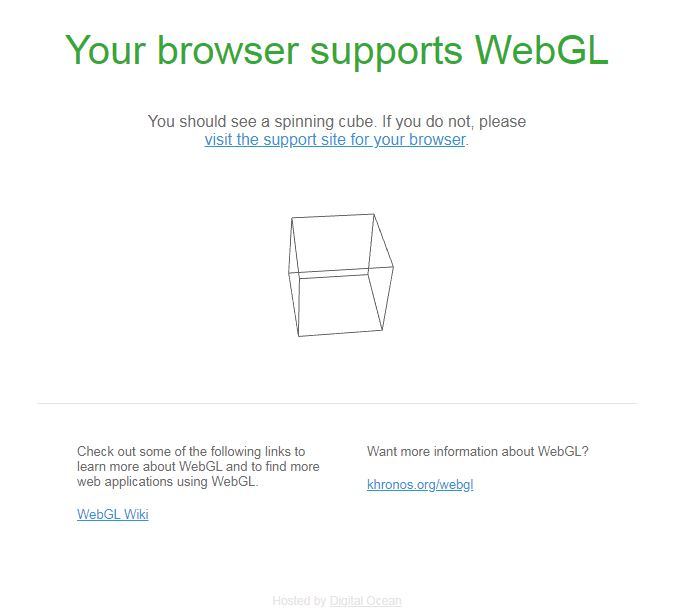 All right, so I’ve dug into this some more, and apparently Pixi is doing some additional validation, also verifying that some specific features are present. In particular, I’m guessing that hardware acceleration may be disabled in your browser. Assuming you’re using Chrome (if not, let me know!), please go into your chrome settings and ensure that “use hardware acceleration when available” is enabled. If it is, your GPU configuration might be on Chrome’s blacklist - in which case you can go to chrome://flags/#ignore-gpu-blacklist and enable “Override software rendering list” (just be aware that may have performance or stability implications on other websites).

Thanks for getting me to look into this and the additional context you’ve been able to provide! I plan on building a support check into Eterna with a more conspicuous notice if it notices that it can’t run properly, and compile a proper troubleshooting guide.

I’ve gone into my Chrome Browser settings and ensured “Use hardware Acceleration When Available” is enabled - That didn’t improve anything, so I also went to the Chrome link you provided and enabled the “Override Software Rendering List” and that too didn’t make any difference, I still get the blank screen.

As I stated in my first post, I think it could just be that currently I’m using an old Nvidia GE FX 5200 graphics card(128MB) till I get my main computer fixed soon, but I guess it’s good to provide an error catch for as many possible scenarios as I’m sure there will be a good few old systems out there that would like to play Eterna, and really should be able to play it considering it’s not graphic intensive, but it’s good to know that a support check will be implemented as soon as possible so that anyone with these kind of issues will at least know that their hardware is probably at fault.

Thanks for the speedy responses and involvement, it’s been interesting. Thank you.

Huh, interesting. Good to know. At this point, you’re probably right that it’s the graphics card. When I talked to Andy Watkins about it, his position was that at this point issue of actual GPU support should be really rare (the GE FX 5200 is over 15 years old! - a computer that shipped with that card will probably be running an OS that’s out of support, and generally be on its last legs).

While the early puzzles aren’t graphics intensive, our current labs are actually quite resource intensive due to their large size in the thousands of bases) - before the PIXI upgrade, even with WebGL enabled, you might get 5fps on it. Falling back to canvas or having a less-capable graphics card would doubtlessly make that even worse. Now on my system I’m able to get up to 15-20fps - still not great, and would be worse without WebGL. We still have more we can do to improve performance, but it isn’t a nonissue. Not shipping with Pixi’s canvas fallback/compatibility version also means that the download size is notably smaller. Another benefit is that there is a class of graphics features (ie, shaders) that require support of recent webgl versions/extensions. We don’t use them a lot, but it’s another part of the consideration.

The story behind this old GC is: My current PC blew a gasket, so to speak, so while I’m researching and ordering parts for a new PC I thought I’d cobble-together a system from old parts I have from years ago just to have a PC that can access the internet at a very basic level.
I had started using Eterna quite a while ago and cause I couldn’t do much else with this old system I thought Eterna would be simple enough for this system to run so I thought I’d give it another go and found I enjoyed Eterna very much more this time round that last time I played it, and it was playing really well with no problems until the latest update when suddenly no puzzles at all would load onto screen…

Anyway, thanks again for all your help, and I’ll be back solving puzzles again as soon as I get my new PC parts and system built… Thanks mate!

@LFP6 - I had this problem last night. Everything was working fine at first and then the puzzles wouldn’t load. Today, I followed your troubleshooting advice above. “Override software rendering list” solved the problem. Not sure why things suddenly changed but thought you might want to know.