Besides the fold change ratio (high being the best) I am not sure what the other things this graph is telling me. Any idea lab players?! 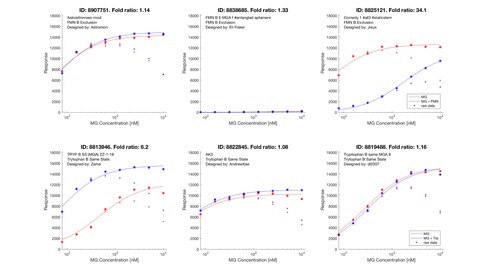 https://imgur.com/a/xa4Z0pa
I’m not an expert but this is what I think I can pick out of it.

So basically what you want is the red and blue lines to be as far apart as possible to indicate the MGA loop forming strong bonds to MG in one state and weak bonds in another state, indicated by the fluorescence intensity(I’m assuming it’s fluorescence spectroscopy they were using). But for optimisation purposes, if they found a very large gap at a specific concentration of MG, it wouldn’t matter if the lines crossed over at higher concentrations (another assumption). I think maybe the fold ratio is related to the largest gap between the two lines at a specific concentration, so they can say the fluorescence increased 34-fold between the two states at a MG concentration of 5x10^2 nM, for example.

Ideally the largest gap would be at the lowest concentrations. Because I can see that increasing concentrations of MG between experiments is still having varying interactions with the RNA when it shouldn’t be (in a perfect world), so equilibrium still favours some formation of the MGA loop when it should be “switched off”. For players, they have to minimize this interaction by creating a lower energy “switched off” state without sacrificing (but hopefully increasing) the ability to “switch on” under the right conditions.

I would suggest next time they include the reference samples of MG without the RNA so us players can see the difference the MG aptamer makes to the fluorescence of the compound.
There must be a theoretical upper limit to the amount of fluorescence you can get out of the MG-MGA adduct, so I wonder if that could be calculated and given to us too.

Again, I’m not an expert and just making guesses at what the graphs mean.

In Same State, the Blue line leads the Red line. In Exclusion, the Red line leads Blue line.
A large separation between lines is good.
A positive slope of the lines is good.
What do we have and or need in the 2D puzzle display for feedback?
Kcal difference, stem lengths (strengths) before and after the aptamer and the MGA loop etc.
Should the 3’ end of the loops be non binding in one state and binding in the other?
As more data comes in, the players will find the subtle differences that make the best switch.
I like this! Rapid feedback :)

My analysis.
So Comedy 1 looks good - I would describe it as a small switching region between the the 2 aptamers and the type of switch is a stem fold as compared to a translate of NTs.
Zama’s zz-18 looks good - description same as Comedy except for a larger switching region
with very close energy difference -.2 and -.1 respectively. I am surprised that such a jagged stem
in state 2 work well.
Conclusion - fix aptamers between sold stems with a folding region between, minimize energy difference.

For FMN - here are some similar puzzles:

Looking at the the FMNBExc and TryptoBSS results it still looks like the motif:
static stem + aptamer + folding area + aptamer + static stem is a working strategy to
separate the blue and red lines.

Looking at the Arc Plot of the results it looks like a High AND Balanced X factor is desirable, One side High with a corresponding Low partner doesn’t seem to do the trick.

@Poll, I’m just now seeing this discussion.  I think your request to publish the control curve as well is an excellent one.  I’ll pass it on to Michael.

I’ve been thinking about this post and decided to gather info into a document for quick reference: https://docs.google.com/document/d/1kh4aSsg3hc5it7089PxYi0aySEaa66imLYkKVFA24-4/edit?usp=sharing

I see what you are saying about the balanced ratio. I’ve also been paying attention to high percentages in combination with ratios above 30.

Does anyone know which is more desirable?—> The Round 3 winner with a 3.95 fold consistent across all concentrations or the Round 4 winners with fold over 10 but variable response.