Recent Update to round 70 Switch Data/Scores

As many of you may know, they just recently updated the switch data. So if some of you are a bit confused about any changes to the visual aspect (the conversion of the reactivity scores to blue/yellow), then here is an answer for you.

“They’re the same results, but the ‘threshold’ used to divide which nucleotides are blue and which are yellow has changed. We try to set this viewing threshold so as to optimize the match of the blue/yellow with what is supposed to be protected/reactive. But in the original upload there was something wrong in this threshold setting.”

So, there you have it. It was ultimately an error in the threshold that needed to be corrected. To give an example of some data that changed. 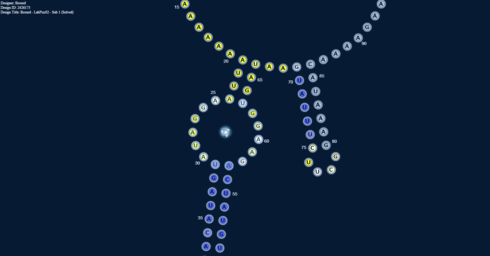 This is a screenshot of Brourd - LabPuz 02 - Sub 1 (Solved) before the update in the threshold.

This is a screenshot of Brourd - LabPuz 02 - Sub 1 (Solved) after the update in the threshold.

As you can see, with the previous threshold, the bases of the binding site and the stack were reactive (or appeared to be at least). After the threshold was changed, there is obvious protection in the binding site and the stack, indicating FMN is binding to this molecule (compared to the previous screenshot). I hope this helps any players out there who are confused. However, I take no responsibility if your confusion increases after reading this explanation!