Should a reverse MS2 work for state off?

Should a MS2, placed in reverse order and forming correctly, satisfy a state off requirement? 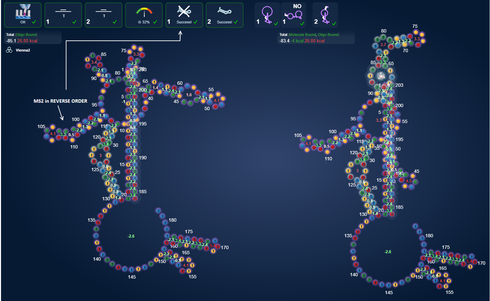 No, it would not be expected to bind to the MS2 protein.

Having said that, once you get access to the lab, you always have the option of ignoring (most of) the constraints as an experiment.  Just don’t expect those to score well.

So, to be clear, you’re saying that it should NOT satisfy the restriction, although the program clearly indicates that it does (see picture). This design has two MS2’s- one forward and one reverse (the one on the right is hidden under the target DNA).  It also meets all requirements for all three engines. I did this for one of Eli’s hashtag experiments and he suggested I ask about it possibly being a bug in the program, and I want to make sure it isn’t before trying another one.

Zama, my apologies. I see what happened. The mirroring MS2 were so perfect MS2 like that it got my brain fooled into think that it was actually a MS2 and that the engines were not flagging it as they were supposed to. I so much liked the symmetry forming. So the engines are working - this time.

To add in a double MS2, you will need to add an extra of exact same MS2 sequence (or one of the alternative MS2’s)

Hi Zama,
The correct MS2 looks like it begins at base number 34. It is present and not formed in state 1 on the right side. In state 2, it is present and is completely formed but partially hidden behind the DNA strand.

Yes, that’s right. My question was about the one that goes backward from 115.  I’m going to assume, from the above answers, that direction matters and putting an MS2 in backward does not count as a real MS2 and therefore meets the restriction. Thanks, everyone!