In this Kudzo lab design, the 1-1 loop is made with an A and U opposite each other in the loop. A and U are known to attract each other and want to form a basepair. (Marked with black rings.) They usually don’t intend to form loops. 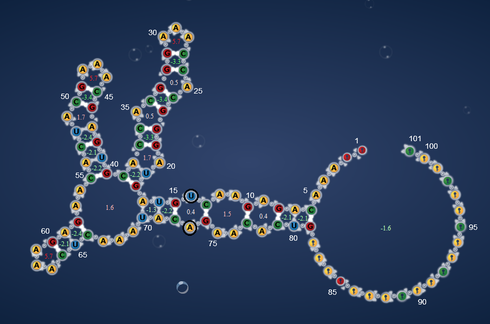 I’m certain that this will not be allowed, Brourd don’t think so either.

I liked Brourds idea so much, that I asked him to allow me to send in a strategy for it. But I should mention for Brourd’s sake, that we haven’t got results back from Kudzu yet.

I would like a strategy that says: No nucleotices that attract each other are allowed to be used in a 1-1 loop.

Give minus 1 pr. each 1-1 loop where this happens

As Brourd says, no loopholes for the algorithm (pun intended)

What a very interesting find! And an even better solution.

I noticed something similar in another lab and was thinking about posting a strategy too. Maybe we could combine the two.

Let us hear. We might find a way to. Send some pictures and describe your finding.

Eli - the strategy I was thinking about is based on Aldo’s “mismatch” strategy and your “C trick,” but it focuses only on the base pairs that precede loops. “Mismatch” does pretty well, but not all potential alternative pairings are equal. I have a sneaking suspicion that the sort of ones I’ve illustrated below are should definitely be avoided. 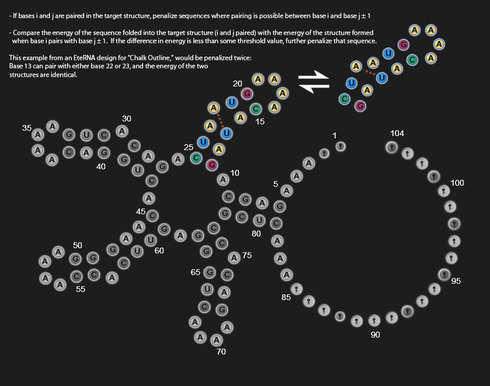 Brourd’s find made me think about expanding on this strategy so that it would apply it to two nucleotides that should be unpaired (or in two different pairs). Here’s an idea of how to do it: 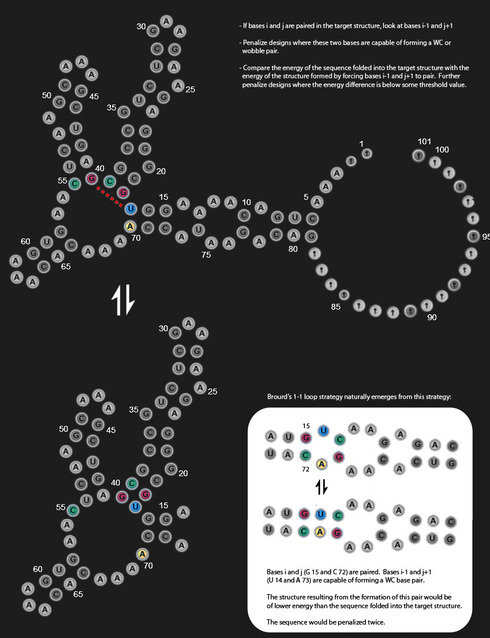 The design used to create that example was designed by EteRNA, by the way.

We are glad to report that your strategy has been implemented and tested.

While implementing your strategy, we have made small changes to the parameters you specified to optimize the performance.

Note that we’ll always run a optimization over the parameters you specify, so you won’t have to worry about fine tuning all the numbers you use.

Just the idea and rough numbers are enough to run your algorithm!

Length : Your strategy was implmented with 33 line of code.

Ordering : We ran your strategy on all synthesized designs and ordered them based on predicted scores. The correlation of your strategy’s ordering with the ordering based on the actual scores was 0.0. (1.0 is the best score, -1.0 is the worst score. A completely random prediction would have 0 correlation)

Please note that the numbers specified above will change in future as we’ll rerun your algorithm whenever new synthesis data is available.

Hmm. Seems like the bots may have gotten better and don’t make this mistake anymore

Yep and I am very happy to see that.