I would like to ad a strategy that says, there can be 0 or 1 double AU-pair in the design (two AU-pairs turning the same way.) For more than one double AU-pair, ad -1 pr. extra.

Neckarea is the exception to this strategy. Here up to 2 X 2 double AU-pair are allowed (if these quads are switched opposite to each other.) Au-pairs in the neck are not counting as AU pairs in the overall design. If there is two double AU-pair in the neck, then an additional AU pair is allowed elsewhere in the design, without penalty.

Here is a picture of a solution the bot made for the star lab. I was asking the bot to get possible solutions to some of the older labs, to get a feeling for how it works. The predicted score was 91%, which is fairly good. 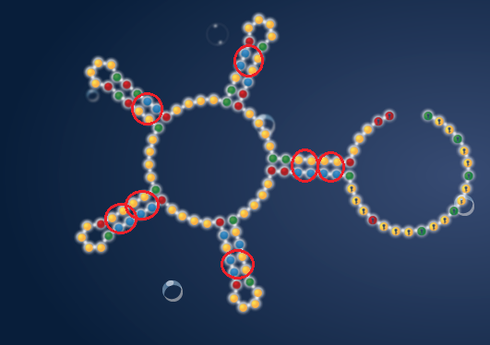 Now comes what worries me. My strategy has a positive score, telling me that the design should be following my strategy.

Also the strategy states that double AU-pairs are only allowed next to each other in the neck area, if twisted opposite each other. Like this.

I don’t think the strategy is working correct. The bot is slipping too many double AU-pairs through, as my strategy is not stopping them as it is supposed to.

It is the same in a couple of other labs I have checked. It fills in too many AU-pairs compared to what the strategy allows without it being penalized.

Info on the design in question: