For the closing basepair of a triloop I had a strategy clear in my mind.

After reading the forum post about Mat’s and mine Triloop tendency, Brourd said he had a feeling that the next basepair will be a GC or an AU. I agreed. I can’t remember seeing a successful triloop with a GU as next pair. (next pair = the basepair next after the closing basepair, Mat’s term)

The short stacked trillops with only two basepairs like those in Kudzu lab I think will mostly need two GC’s. Based on the general rule of one GC-pair pr junction. But for 3 nt length and longer I have a feeling that AU is actually not too bad in many cases, though we often when designing try go safe and put GC in there too out of fear for the trilloop not holding. Mat agrees.

I ran CSE for the next pair in the designs with triloops plus the whole triloop with a two basepair stack, to see what the percentage of distribution was. I made the rest of the strategy based on that.

For stacks 2 nt long, closed with a triloop. give + 2 if second basepair is a GC.

Its like fifty fifty. However for the GC and AU pair and it’s positioning there is a tendency. (Primarily for triloops with 3 nt stacks, only slightly for 4 nt stacks) There is a slight tendency that U’s and C’s (left here and base 66 in the lab) tend to be situated to one side and the A’s and G’s to the other (base 72). See example here: 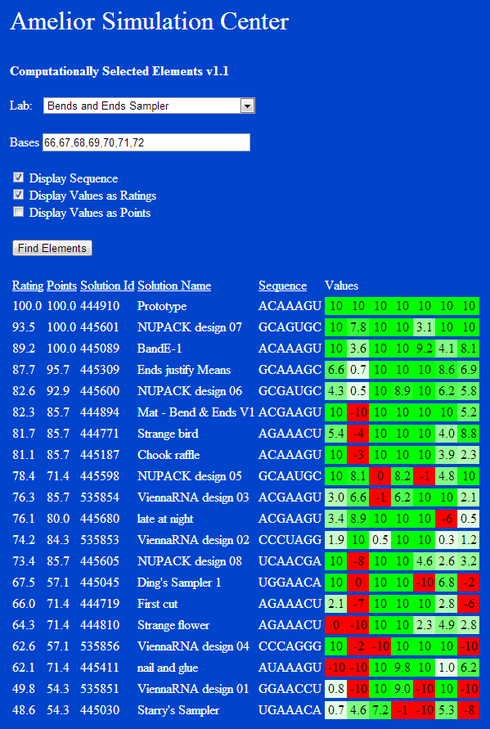 For 3 nt stacks give +0,5 if U or C is positioned to the right side (lowest number in the RNA reading direction)

For stacks 4 nt long, it looks like AU is slightly more for next pair. So give + 1 for GC-pair and + 2 for AU pair. The U and C tendency persists but less clear. So I will leave it for now.

By the way, some of the most stable triloops have other colors than yellow in their tip. Mat said: Yep - I believe that.

They are typically Uracil or Cytosine. For now there is not enough data to see the further tendencies. I will leave that for later and perhaps someone else to figure out how we can exploit this for stable designing.

I have put screenshots of most of the CSE results in that doc linked here. They are what I based the strategy on.

Thanks to Mat for discussion and comments while I was considering and working on the coming strategy. Acknowledgements to Mat and John for making it easy to find tendencies with the CSE tool.

For theory behind the strategy see this forum post.