Strategy courtesy to jandersonlee because of pattern origin.

Give +2 for each base in stretch 2 that is complementary with stretch 3. (Except for first base after the MS2 sequence - it doesn’t have to be complementary or bound)

Reduce by -1⁄2 each time the complementarity between bases are not the strongest option.

Typical length of MS2 gate itself is 5 base pairs, although the sequence stretch is often 6 bases, but often with the base or bases between MS2 and MS2 gate, unpaired as a 1-1 loop or as a bulge. 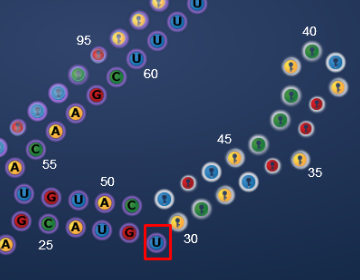 In microRNA, this MS2 stem mirror pattern turns up too, like in turn on MS2/FMN labs, although in the MS2 gate instead of an aptamer, since there are no aptamer in microRNA designs. 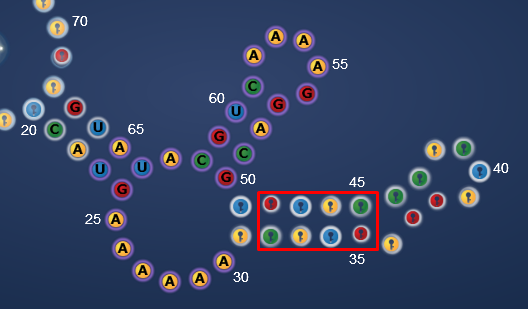 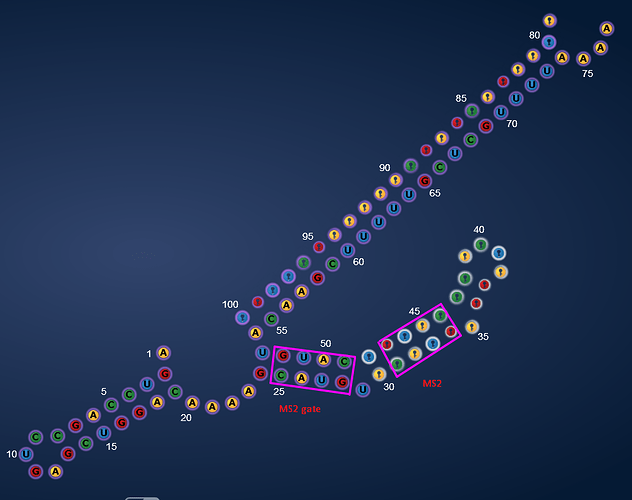 This microRNA design contains exactly the same pattern as the same state turn on labs. (Link: https://getsatisfaction.com/eternagame/topics/-strategy-market-switch-complementary-zipper-style-ms2…) However it doesn’t have an aptamer and the MS2 complementary strands, turn up in the MS2 gate instead of as in the MS2 labs, the aptamer gates. But practically its the same principle.

This means that the sequences needed, will need to be able to adjust to whatever microRNA gets thrown at us.

So this is why I think that a weaker mirror variations in the MS2 gate may also have to be accepted in particular for the late strand of the MS2 gate. Since both the MS2 and the microRNA are fixed and unchangeable in sequence. 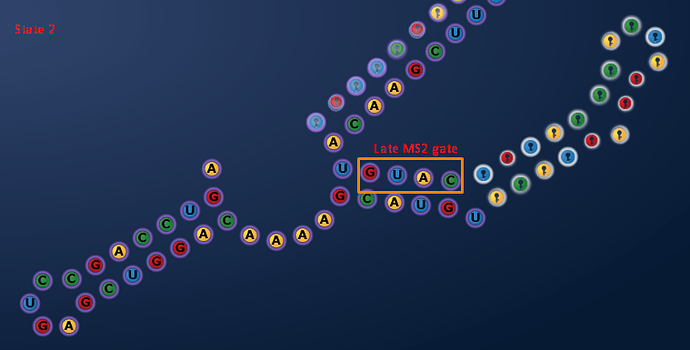 Its a complementary word change game as mentioned here: 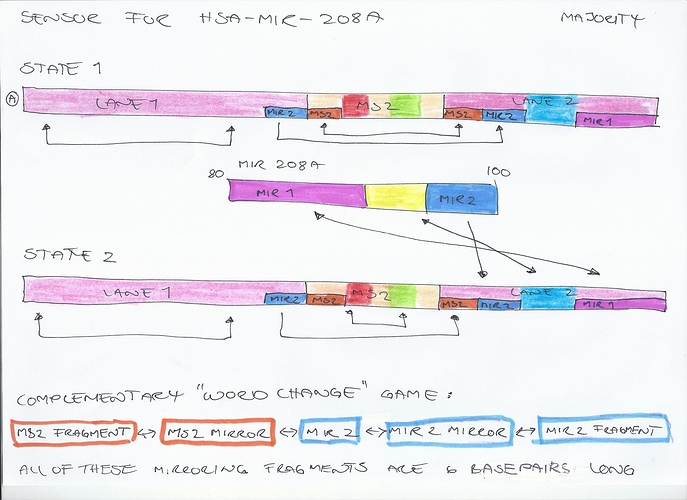 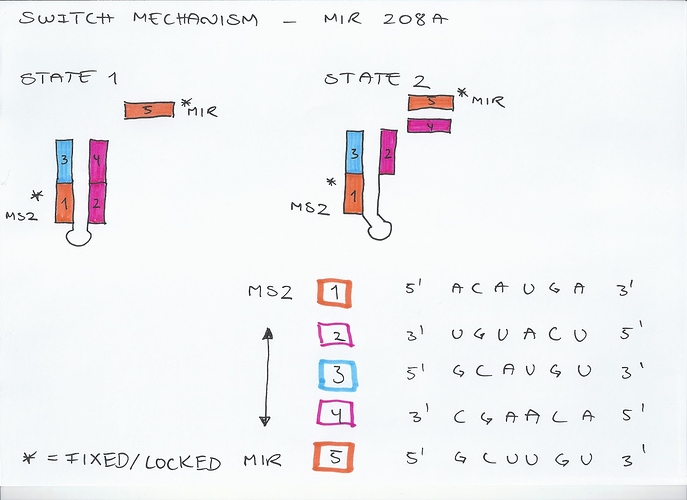 Ranking in importance of direct complementarity

Sections 2-4 are changeable. But 2 has to be complementary to 1 - no discussion allowed.

3 has to be complementary to both 2 and 4 and with some discussion/straying allowed.

But 4 has to be complementary to 5, no discussion allowed.

Eli, I really like the way you’ve tied designs that fit this pattern to a word change game.  It points the way to an algorithm that, given almost any miRNA, could efficiently enumerate 30,000 or more substantially different candidate RNA switches that conform to this pattern.  (By substantially different, I mean the 18-base sequences for the three intermediate 6-base strands are unique.)

Here’s the general outline of the algorithm I envision: In Y/R (pyrimidine/purine) notation, the  5’-3’ sequence for the MS2 hairpin you’ve marked is YRYRYY.  The sequence for our specific miRNA is
YRYYYYRYYYRYYYYYYRRRYR.  The first step in the algorithm is to identify all the substrings of length 6 that are have no more than 2 mismatches with the YRYRYY string.  For our miRNA, I count 6, i.e.

Now let’s fill in the second line.  Counting the possibilities here is more complicated.  If the first and third line are both Y’s or both R’s, there will be either 1 or two choices for the second line.  If they are different, there has to be a mismatch with one or the other, and all 4 bases are acceptable.  For a fairly conservative case, let’s assume there is one mismatch, two bases where we have a two-way choice and three bases where our choice is forced.  In that case, we get 4 * 2^2, or 16 choices. for the second line. The same is true for the fourth line.

Thus, for almost any Y/R substring we pull out in the first step, we’ll end up with at least 128 * 16 * 16 = 32,768 unique solutions to the word change problem.  All that’s left to fully specify the switch is to pair up (or not) the remaining bases in any way that balances the energy between the two states and maintains the designed pairings of the pattern.

(It’s easy for me to dismiss that last step with a wave of the hand because I haven’t tried coding it. But I have to expect that’s already been coded in any sophisticated puzzle solving bot.

But regardless of the exact numbers, I’m anticipating that given almost any miRNA, there would be at least one 6 base sequence that matched at least 4 positions of the MS2 YRYRYY string, so the algorithm could be applied, and within a few minutes (or maybe a few hours, if I’ve really underestimated the compute time for filling out the rest of the bases), a desktop class machine could come up with 10,000 high-quality candidate designs generated from this simple pattern.

Wow, this is beautiful, Omei!

Sending you a big hug. I love what youve done.

And I think I already have an addition. I were brewing on it tonight. I think there is mainly one particular region of the microRNA that is wish for hooking up with the design. If our microRNA behaves as it does with messenger RNA in nature.

If my suspicion turns out to be true - we need it confirmed with further lab results also involving other microRNA’s - then only a very specific region of the microRNA will prefer to be paired up with the design.

This approach of yours also potentially can be used to work around the headache I have been having on the turnoff labs. They allow more sliding between the different word change game lines. Meaning that they don’t necessarily line up 6 and 6, but may attach a base after or before. Also they need a bit fewer base pairings. However allowing the slide opens up for allowing to target a microRNA even if a word change game can’t be matched up fully the whole way.

The turn on lab don’t seem to need the slide for now, but the turnoff labs seem to do. But besides an extra “word” they basically run by same principle as the turn on lab.

I’m betting on that the winners in future microRNA turnoff labs will follow the pattern of variant 2 rather than variant 1. Here is why and this is the addition I been working on:

MicroRNA and the seed region

Just to clarify, are these the definitions for the streches?

However there is an additional pattern too. This is what the 1-1 and bulge thing I mentioned above are above. (Background article: Loop spacers)

There are two main patterns for the turnon lab. And I suspect they will continue. The pattern you got is one of them and the one that my word change game show.

However there is another pattern too. And that one has only 5 bases involved in stretch 1 and 2. I see both as options. Both will get the job done and I suspect they will hit through also when we try with other microRNA’s.

The beauty of both of these solves are that either the 1 nt bulge or the 1-1 loop between MS2 hairpin and MS2 gate helps unstabilizing the structure just a tiny bit and I think it is a help for the designs to get moving and unzipping if needed.

Notice that the 1-1 loop happens in both states and that they are boosted or not boosted - in a way that is weak. 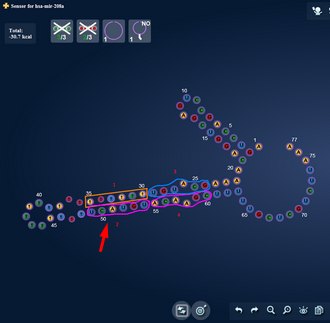 Both are legal and I can’t yet say which will win out. Each may have a strength in specific situations. Like imagine if the microRNA is far from a direct word game match, then having 6 bases in all base stretches gives a stronger opportunity for a match, than the likely a bit weaker option with 5 base on stretch 1 and 2.

Actually when thinking about it, I strongly suspect that it will be beneficial having a weak 1-1 loop mismatch programmed into the word change game between line 3 and 4 in state 1. But we need more labs to be specific. I just suspect that this pattern will show up again, when the lab gets tried with other microRNA’s.

Similar I expect that GU’s will turn up at exactly this spot in MS2 gates in future labs also. Simply because a GU helps break free the structure, so the switch can move back and forth between states as needed. 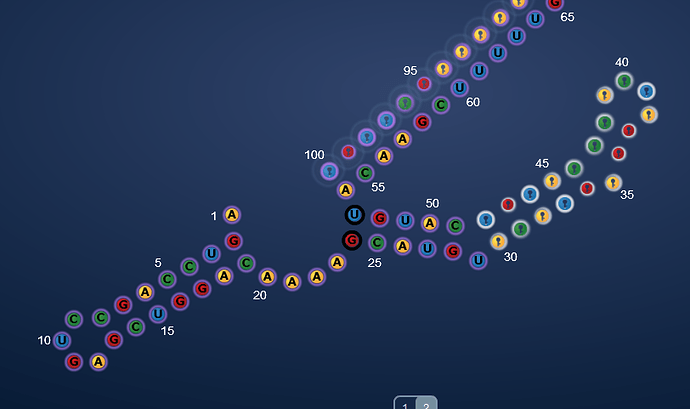 I am pleased to announce that a preliminary version of your strategy has been implemented with 46 lines of code. The code might slightly change in the future to remove bugs, but you can check the current version here. We will soon work on optimizing your parameters and testing the strategy.