As a rule of thumb the obligate switching base pairs in a MS2/FMN switch are following:

Now all the base pairs in the MS2 hairpin don’t always need to be switching - as it is sometimes enough that just a few of them break open - so the actual switching number can be lower. But that’s fairly okay.

But generally most of the top scoring switches have their number of actual switching base pairs very close to these 10 base pairs. Not much above or much below. That is if the switch is a partial and not a full moving switch or have a full moving aptamer. So it is possible getting a switch moving with more base pairs, but I still consider it harder to get a well controlled switch with the whole switch moving. So this is the motivation behind the strategy.

MicroRNA’s are excluded since they obviously

needs a bigger amount of switching base pairs due to need to switch between no microRNA in one state and pairing up with most of a 22 nucleotide long sequence in next.

In exclusion labs there tends to be a bit fewer base pairs in the second state than the 1. But instead of accounting for that here, I will write another strategy that should take care about the differences in switching base pairs between the states.

I am pleased to announce that a preliminary version of your strategy has been implemented with 14 lines of code. The code might slightly change in the future to remove bugs, but you can check the current version here. We will soon work on optimizing your parameters and testing the strategy.

Eli, I looked at Vineet’s coding of your strategy and realized that there are a number of different ways your general idea might be reduced to an algorithm. 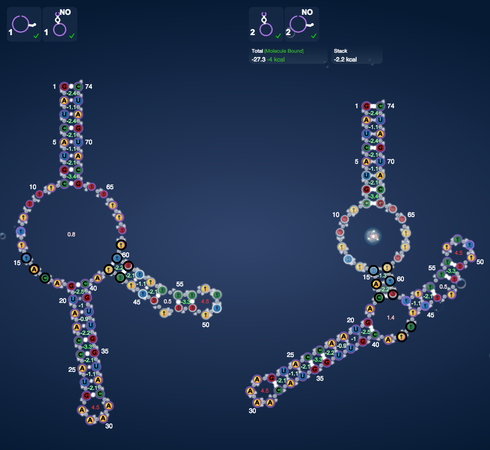 When implementing the strategy I was also thinking of these different possible base pair definitions, and I just randomly chose the first one. Let me know which one you think best fits the strategy and I can modify the code

Omei, big thx for making me aware of the various outputs of my strategy and big thx Vineet, for your questions also.

Similar for the MS2 hairpin. While being on in state 1, but off for state 2, part of it would still need to be switching. So 7 base pairs - while not all are always needed to get moving -  like they were not in the example you showed, Omei.

So the example image holds 3 switching aptamer base pairs between states, but only 2 switching base pairs for the MS2 - as the last 5 are not breaking in the estimate. 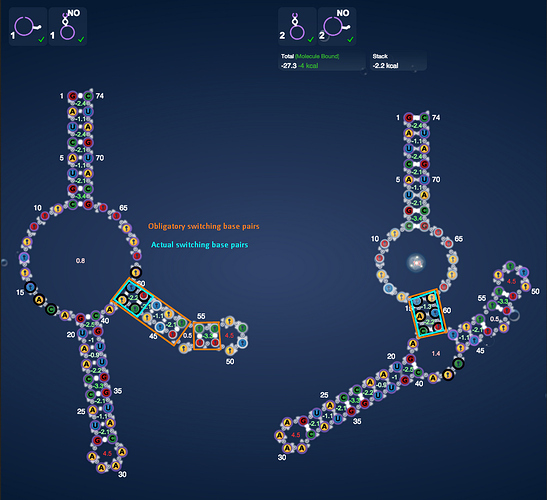 Also for this lab have the area for obligate switching bases overlapping since the forming MS2 and forming aptamer are sharing some bases.

Similar for the Same state labs, where the aptamer and MS2 is on in one state and off in the other. Those would also have the 3 obligate switching pairs (although in practice there can be more - there regularly are 4-5 base pairs involved in the switching end of the aptamer) aptamer base pairs break + the MS2 hairpin base pairs.

So I have been counting across states. Not in single states alone. This is to cover up for which ever way the switch direction is and if aptamer and MS2 is in same or different states. Plus I found that having around 10 switching base pairs give or take a little, would cover for most of the successful switches. Where having a lot more switching base pairs - obligatory and especially if not in most cases are a bad idea. Except for the few lucky full moving switches.

What I should have called it

Notice the black ringed area. In this case the only other bases involved in the switch, are the MS2 turnoff bases. These are really important. As they make the switch happen. By both binding strongly with the first part of the aptamer sequence (FMN1) in state 1 and turning off the MS2 in state 2. The MS2 turnoff sequence have similarities across the turnoff labs, and often even in base content. (CU segment) (Link to background post)

So this was what strategy I originally intended and what I would want. (Variation A) But I wish to keep the strategy that you already programmed, Vineet, as an extra variation B, as I would like to see how it does too. Also I’m also very interested in the variation C, that Omei mentions:

For example, I can see a case for counting switching bases instead of switching base pairs, in which case I would count 8 bases (the ones I’ve circled) as switching.  Dividing by 2, this could be given a “pair” count of 4.

One of these 3 strategies will hit closer to home, so I would like to not rule them out beforehand. So can I get variation A, B and C?

Sure Eli, I’ll code up the variations. I’m really interested in which variation will be more accurate (and why)

I am pleased to announce that preliminary versions of the three variations of your strategy have been implemented. Please note that the code might slightly change in the future to remove bugs.

We will soon work on optimizing your parameters and testing the strategy.

Special thx to Omei for catching that the strategy was not doing as I intended. And thx to you both for making strategy variations.