[Strategy Market] [Switch] Elements: When to make the tails pair

I mentioned that EternaBot didn’t always had an idea of what parts to pair up and when. Tails are one of them.

Distance to next element from both ends of the sequence:

For 11 bases or more at each side, give +3 for making the tail ends pair up.

Even if just one of the sides are 11 bases or more and the other is like 6 bases, I think it could pay off to pair these 6 bases. Give +2

Give +1 for each base pair pairing up as tail bases, as long as at least minimum six bases are left over at each side, if the aptamer switching area is between tail and aptamer. Similar demands for a MS2 sequence. Leave it 6 spacer bases that it can use as a turnoff sequence.

If there are less than 10 bases from sequence end to next element - then penalize against tail formation - increasingly. That’s if the top end of the aptamer is in the switching area and in less than 10 bases distance on both sides. Similar for MS2

However if the top end of the aptamer is supposed to be static (locked), then it can still pay off creating tail of the two tail sequence ends as long as it is somewhat like 4 base pairs long or more. But I think the smarter way of tying this particular knot will be running JL’s strategy for this last section of the strategy. (https://getsatisfaction.com/eternagam…)

A generally good strategy - when the tail tips are not too short, is to make them pair up with each other and then make the switch happens inside of the design. Or if only one of the tails is long in one side but not the other make the long one into a static stem.

Basically the tails are tied up into a neck segment.

Summed up. If it is long and it dangles, make it bind somewhere. If it is not is suited for a bind elsewhere, make it bind with itself, except if it is needed to be involved in the switch.

Labs where the tails are too short for it to be worth to tie them are SS1, Ex4 and Ex. Similar the microRNA’s labs are an exception. There the microRNA complementary dangling tail needs to be free. As one of them initiates the switch. And favorite spot of microRNA to make this happen is specifically at the end of the RNA sequence.

I agree that unnecessary dangling ends should be tied up into a static neck. FWIW, I’ll offer a simpler test that might work almost as well as one that has a lot of special cases to address all the nuances.

Here’s the graph from the R95 SS2 lab that prompted these specific cutoffs. I presume they will be adjusted with all the data. 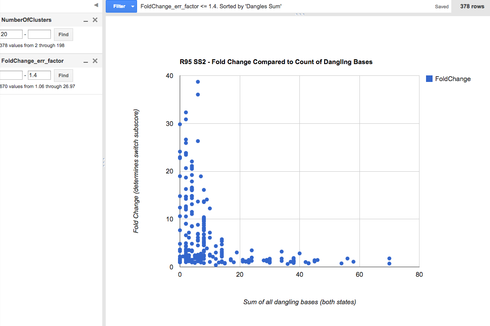 Wow, this is super cool!

I would wish to except the microRNAs, since they need complementary dangles the size of 4-12. However they pretty much want them to the same side - the end of the sequence, so perhaps just one side needs to be excepted from your overall strategy .

I very much love this much simpler take.

Would you prefer I implement Omei’s mod of your strategy where you count up 4 the 4 dangling ends? Or do you want me to implement your original strategy?

If you choose the latter option, then I’ll ask Omei if he wants me to implement his modification of the strategy in a separate strategy.

I think Omei’s take makes the strategy simpler, so I wish for his version.

I am pleased to announce that a preliminary version of your strategy has been implemented with 20 lines of code. The code might slightly change in the future to remove bugs, but you can check the current version here. We will soon work on optimizing your parameters and testing the strategy.