First, we’ll define a helix with this particular strategy as being a continuous series of consecutive base pairs. For now, all loops will terminate a helix.

Active helices are mobile. These are the dynamic elements of the RNA molecule, and represent those helices that unfold and transform into other helices or single stranded regions.

Passive helices are immobile. These are the static elements of the RNA molecule, and represent the helices that should be present in most of the statistical ensemble of molecules, not transforming into other structures.

The number of G-C base pairs in active helices should ideally be set at a count of two.

There are a few penalties and conditions for helices where the count exceeds two.

If the number of G-C base pairs in an active helix is equal to two
Then reward.

If the number of G-C base pairs in an active helix exceeds a count of two,
And there are no G-U base pairs between the G-C base pairs,
Then penalize for each helix that exceeds the limit.

If it’s not possible to code these conditions, then penalize for each helix that exceeds a count of two G-C base pairs.

The penalties and conditions for active helices with fewer G-C base pairs are different.

If an active helix has a count of 0 G-C base pairs,
Then penalize. And penalize some more.

Penalize all active helices with two or fewer base pairs.

Penalize all passive helices with a length of three or fewer base pairs.

Penalize all passive helices where the number of G-C base pairs is equal to or less than half of the total number of base pairs.

Penalize all passive helices where the dot plot for that helix is contains any alternative pairing probabilities.

As a visual example 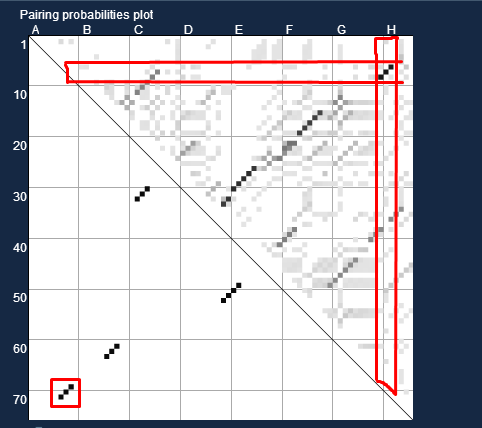 The three base pair helix seen in this dotplot would be in the passive class.
There would be two penalties.
One for being less than four base pairs in length, and another for having any alternative pairing probabilities visible on the dotplot for that helix. These pairiing probabilities would be defined by the area bound within the red lines.

Addendum Once the length of a passive helix exceeds 7 base pairs, the G-C requirement penalty is no longer quite as important, so it may do well to focus solely on the dotplot condition for helices that are 7 base pairs or more in length.

All of the strategies should be coded to be scored in all models available.

I am pleased to announce that a preliminary version of your strategy has been implemented with 61 lines of code. The code might slightly change in the future to remove bugs, but you can check the current version here. We will soon work on optimizing your parameters and testing the strategy.