I got inspired from the discussion with Omei and Vineet. (See the Strategy on obligate switching base pairs) So I made a new strategy.

Generally I think it smarter to lock up areas of a switch to make it a partial switch, so a smaller area is doing the switching. I think it a more effective way of hitting a winner. This is one of the things I can see EternaBot is lacking in knowledge, when I took a look at its first solves. It has no idea of when it pays better of locking certain sections of the design, in order to control where the switching happens.

There should be more bases in the obligate switching area involved in active switching, than additional switching bases. 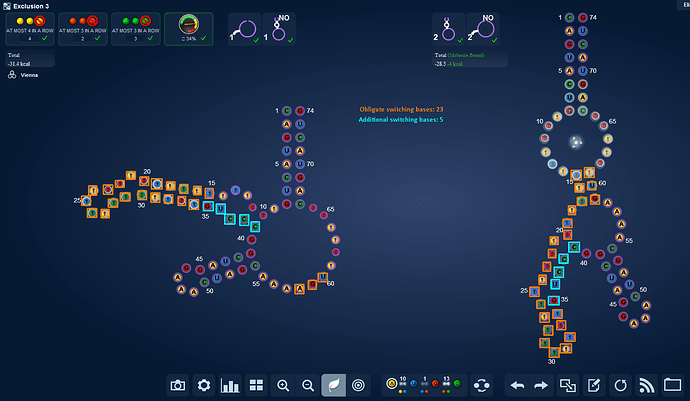 Maximum amount of possible obligatory switching bases are 25. (Turnoff labs) 19 from MS2 and 6 from aptamer closing end. Same state designs can have longer aptamer gates, so perhaps adjustments in the future will be needed for EternaBot between turnoff and turn on labs. They have similar rules in many areas, but different rules in specific cases. Such as same state don’t need a MS2 turnoff, but turnoff labs mostly do. And that aptamer gate length differ between turnoff and turn on.

I am pleased to announce that a preliminary version of your strategy has been implemented with 37 lines of code. The code might slightly change in the future to remove bugs, but you can check the current version here. We will soon work on optimizing your parameters and testing the strategy.