Unfortunately we are having bit of problems calculating local loop energies - we’ll get to your algorithm as soon as we fix the problem!

Does this strategy only apply to puzzles with three or four tetra loops? Does it mean that any other design should get a default score of zero?

I’m glad you asked, this was a good question. I just checked the asymmetry lab. Here the pattern is similar in some cases - that is energy twin loops.

But another pattern occours and that’s why I won’t include two loops. In the Asymmetry lab where there are different number of nucleotides between the arms and the arms are different too, it seems to be enough that energy in the tetraloops is close to each other. (0,2-0,4 difference)

But if we in the future make symetric designs with just two loops, I might want them included.

We are glad to report that your strategy has been implemented and tested.

While implementing your strategy, we have made small changes to the parameters you specified to optimize the performance.

Note that we’ll always run a optimization over the parameters you specify, so you won’t have to worry about fine tuning all the numbers you use.

Just the idea and rough numbers are enough to run your algorithm!

Length : Your strategy was implmented with 40 line of code.

Ordering : We ran your strategy on all synthesized designs and ordered them based on predicted scores. The correlation of your strategy’s ordering with the ordering based on the actual scores was 0.165. (1.0 is the best score, -1.0 is the worst score. A

completely random prediction would have 0 correlation)

Please note that the numbers specified above will change in future as we’ll rerun your algorithm whenever new synthesis data is available.

More detailed result has been posted on the strategy market page. Thank you for sharing your idea, and we look forward to other brilliant strategies from you!

It is fully possible to break the pattern with similar tetraloop energy. I tried it myself in several cloud lab designs on purpose. 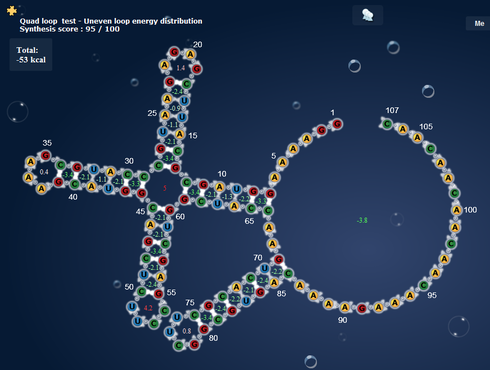 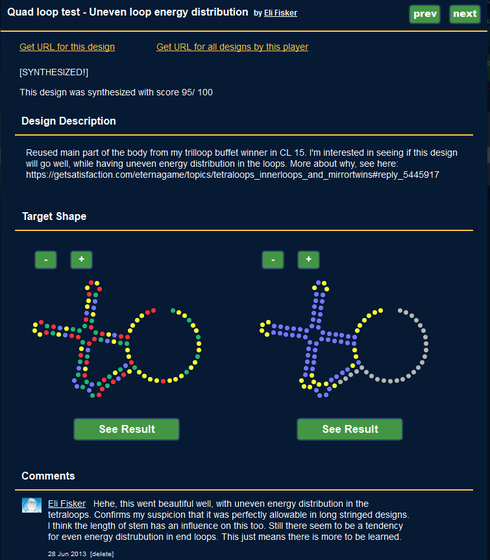 I want to adjust my strategy as I see a clearer picture arise. My first strategy is not fully wrong, it is just possible to get around it if the stems in the design are stable enough to hold the loop. And in particular if the design has longer stems. However even in the long stem designs there is a tendency for more loops with uneven energy in the loops among the lower scoring.

Where I see more of a pattern now is for designs with shorter stems on a multiloop. There is a higher prevalence of uneven energy distribution in end loops for the lower scoring designs than among the winners. It is still fully possible to break pattern. But still there is a tendency, but I think it will be more outspoken in designs with 4 bp stems and shorter. This should be reflected in the strategy, for the best use of it.

New strategy
Give double penalty in stems 4 bp and shorter if for uneven energy in same size end loops. The bigger the difference, the worse. Also I believe there is an optimal energy range for each size loop.

I think if stems are well constructed and in themselves stable, it has a chance, even though the loops are very different in energy. However if the stems has some instabilities, too different loop energies, will tip the cardhouse. I think this goes too in bigger end loops. Though a certain percentage in energy difference is allowed. 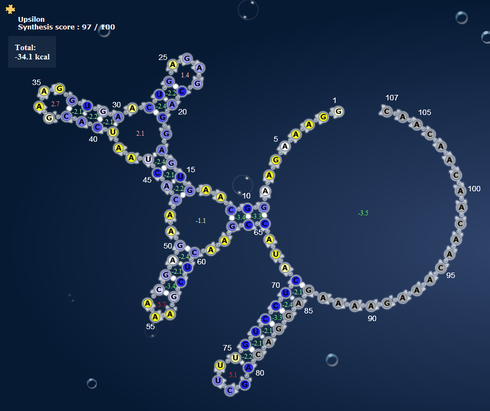 Hyphema found another of the exceptions in the Half branches lab, in designs by Merriskies and wondered.

Hyphema: been looking more at the Half of the Branches lab and have no idea why Merriskies scored so high with the exception that the tetraloops were so asymmetric energetically
Hyphema: thankfully merriskies had another similar design synthd and it did poorly and the big difference was the boosting of the tetraloop
Eli Fisker: Uneven energy in tetraloop is allowed
Hyphema: but was that the key?
Hyphema: or just some fluke?
Eli Fisker: but I think it generally goes better for designs with long stems
Hyphema: certainly that
Eli Fisker: Usually this goes worse in designs with shorter stems
Eli Fisker: However I think it flies as the two stems are quite different

Here are the designs that Hyphema was thinking about: http://eterna.cmu.edu/game/browse/742… 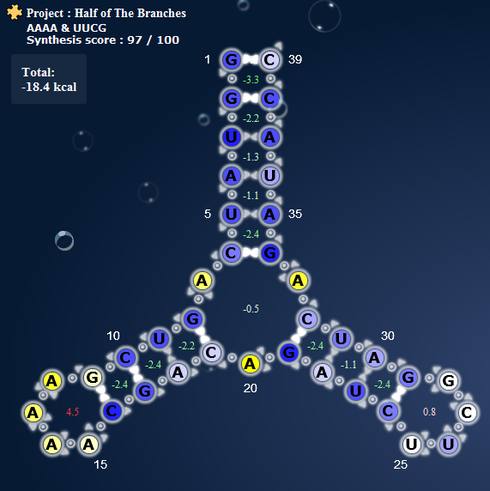 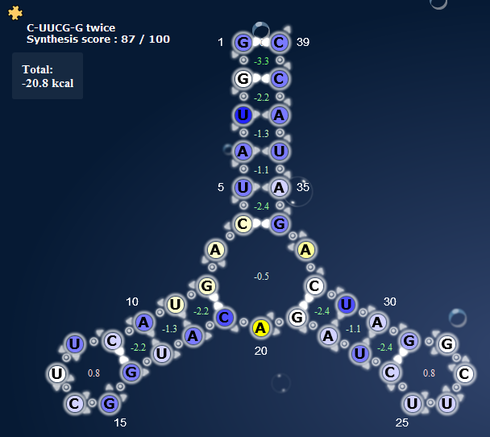 I’m still not sure that what I say about loop energy similarity is the full truth, but I think it is closer to the truth this time. It will be interesting to see what it end up with.

Just noticed this addition you made Eli and thank you! It should be noted that the shape signals were weak for both designs. And I am not sure about the scoring system here but I wonder if it was based on a scaling system where the 97 winner was just the top design although overall weakly folded based on the shape values.

Yes, when you brought up the raw SHAPE values when we were discussing the designs, they seemed to have overall rather low signals than in general compared to other labs. You are correct that the data gets scaled.

The raw numbers themselves vary from lab to lab. I’m still struggling with understanding this part of the SHAPE numbers. However Nando gives a decent explanation in here: