[Strategy market] Twist of some of the GC-pairs in strings

Sometimes there is a penalty for having all GC-pairs in a string, turn in the same direction, even if they are not right besides each other. (They will typically be places in each end of a string, in junctions.)

This is helpful as it improves the stability of the structure and make the entropy look better. It should often be the GC-pair closing the tetraloop that should be twisted, as not to interfere with the sameturning rule of GC-pairs in the multiloop. You don’t have to have all GC-pair in arms turn opposite, just some.

But here is the general rule:
In a string with two GC-pairs, one of them should be twisted opposite the other.

For a string with tree GC-pairs at least one should be twisted opposite the others.

In symmetric designs with 7 strings (neck included) penalize if GC-pairs in less than 5 strings are twisted. For each pair below 5, penalize with -1 pr each lower.

In a asymmetric design with 7 strings (neck included), penalise if GC-pairs in less than 4 strings GC-pair are twisted. For each pair below 4, penalize with -1 pr. string with missing twist.

Just a small addition to why this strategy is needed. I asked our bot to output 10 designs for the Bulged star lab to see how it worked. Two of the ten designs have the pattern this strategy is trying to avoid. And there were overall too much repetition on how the GC-pairs in the junctions turned compared to each other.

Notice how all the C’s are on the one side of the string in the arm and similar all the G’s are on the other side of the arm. This pattern has a history of not working in lab. Our energy model hates it as well, when it is as clearly expressed as here. 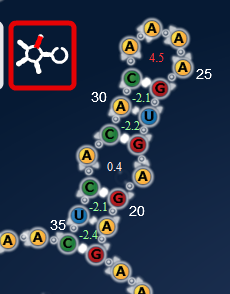 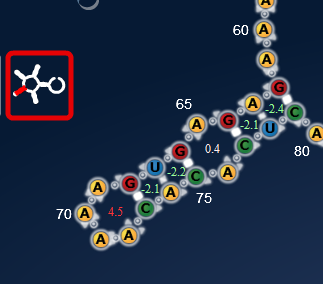 This strategy is to prevent our bot from making patterns like this. Else our bot will place the GC-pairs way too repetitative.

I know this strategy is not programmed yet and no rush. I just wanted to share, now I can see for myself what my bot is doing.

RNA sequences for the designs I shoot pictures of.

Here is the link to my bot results. The designs mentioned are number 2 & 3.