Following up on conversation in today’s dev chat: http://eternawiki.org/wiki/index.php5/2017.12.15_Dev_Chat

A number of users (and developers) have raised concerns that the tutorial progression is too difficult, especially the supercomputer puzzles, significantly impeding the ability of potential players to enter the lab. There are two ways that the progression can be relatively easily updated:

Also, for any who are interested, you can try your hand at building tutorials or trying out modifications for existing tutorials! Check out this Google doc for a quick intro: https://docs.google.com/document/d/1m9vkiZO9_MslT1qOXGpsfvKyCtWLLJcsW0BIbCZgHu8/edit

I have a couple of suggestions for getting started writing tutorials.

The document link LFP6 is the only document we have currently, but it is more of a specification than a quick intro.  LFP6 and Eli have agreed to write more of an intro guide.  I think LFP6 has done a quick first pass which he will post right away.  This will be filled in more over time.

I suggest the first thing you might want to do is to search for “scripted” in the player puzzles. 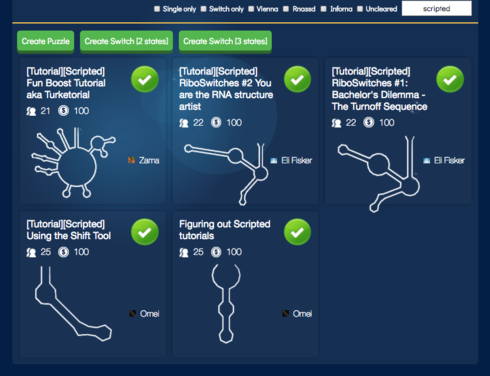 Pick a puzzle, go through it, and make a note of the puzzle_ID.  Then type into your browser the URL http://www.eternagame.org/game/tuttest/?pid=8349002, but replacing the 8349002 with the puzzle id of the puzzle you just looked at.  Now, you will be able to see both the script that drives the tutorial, and the puzzle.  If you want, you can try making edits to the tutorial and testing the changes.  But be warned – the tutorial interpreter is very  picky, and will simply stop, without any error message, if it comes to something that it doesn’t understand.  (One more note: there is a “Save” button in the tutorial maker which, if you press it, will tell you that it has updated the tutorial.  But it didn’t really, unless you are actually the owner of the puzzle.  So rest assured that you can not inadvertently mess up someon else’s tutorial.)

Finally, if you’ve done the first two things and are still interested, ask either LFP6 or me for an invitation to the Player-Driven Slack team.  We have a very active channel there supporting each other in developing tutorials.  That group has been critical getting three people (so far) to actually get through the tutorial writing process.

Hope to see you there!

That document is actually the intro, not the documentation/spec. Still a work in progress though!

Sure enough.  Was it once a link to the documentation?  I was sure I had checked it, but that was immediately after your initial post.

No, it wasn’t. Happens to me sometimes.