EteRNA displays an RNA in the shape that minimizes its free energy. An RNA molecule in solution doesn’t stay in one fixed shape. The minimum free energy structure may be favored, but any given molecule shifts between structures over time. What are these other structures? How fast is the conversion process? Do these higher-energy “suboptimal” structures ever accumulate? The barriers webserver can provide a bit of insight.

How to submit a sequence

Enter the raw sequence into the box. Submissions to the server have a 100-nt limit. This is ideal for player projects, but it is too small for labs. If you trim all but the first unpaired bases from the end of a lab design, it will be short enough to submit. In most cases, removing the dangling ends does not markedly change the output of the program, but there are no guarantees.

The default settings work well for the majority of sequences, but you should make sure to disable the option “avoid isolated base pairs” if the target structure contains them. Isolated base pairs have occurred in the labs “shape test” and “kudzu”.

How to interpret the output

The first thing you will see is a report of how many structures occur within a certain energy range, and a tree diagram: 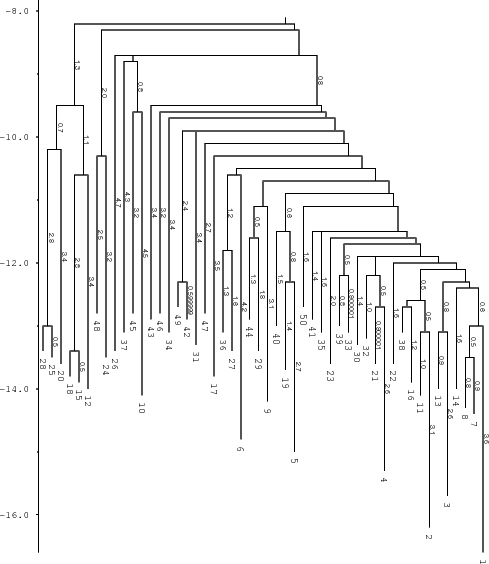 Each tip of a branch on the tree represents a secondary structure that your sequence could fold into. Each structure is numbered. The closer two branches are, the more similar their respective structures. The lower the tip of a branch, the lower the energy of the corresponding structure. The horizontal lines that connect branches represent the highest-energy intermediate that occurs when those two structures interconvert. The higher on the y-axis these lines are, the higher the energy of the intermediate.

How to view suboptimal structures

For the rest of this tutorial, I’ll refer to this tree diagram: 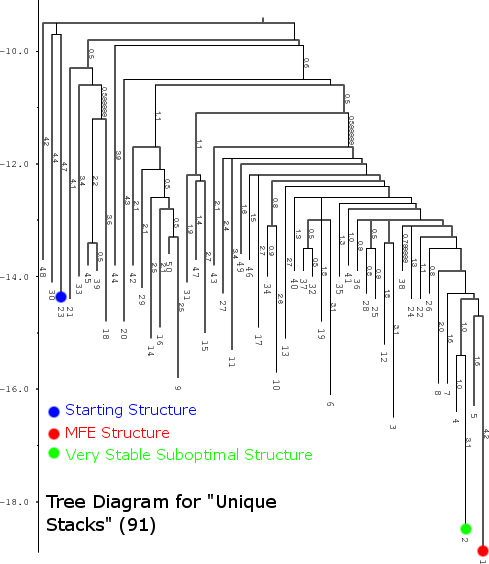 You can use barriers to view a videos of two structures interconverting. To view the structures, go down to the heading “folding paths”. Select the number of a starting structure and an ending structure, and click OK. In this example, I have chosen the path from structure 23, (blue dot in the tree diagram above), to structure 1 (red dot). After pressing “OK,” the first thing you will see is your starting structure in a window like the one below: 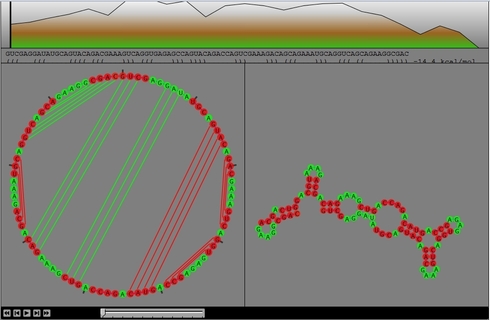 The mountain plot at the top of the screen shows the change of energy along the folding path. Beneath the mountain plot are two representations of the secondary structure. Pressing “play” will show an animation of the transition between the two structures.

The screenshot below shows the frame of the animation containing the highest-energy intermediate between structures 23 and 1. A molecule that has adopted structure 23 must gain enough energy to form this intermediate if it is to form structure 1. In general, the requirement of gaining this energy is a “barrier” that must be overcome on a misfolded structure’s path to a lower-energy structure. 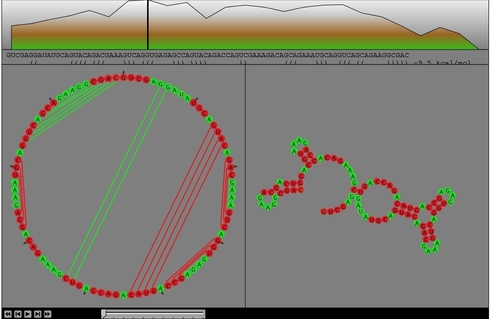 At the end of the animation, the molecule has adopted structure 1 - the minimum free energy structure: 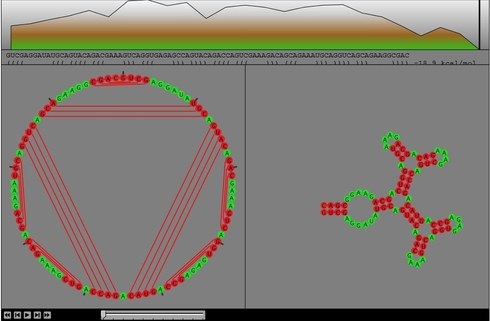 How to view folding kinetics

Barriers also gives you an idea as to how fast the conversion of two structures takes place. To do this, scroll to the heading “Folding Kinetics” and look at the fields labeled “treekin options”. The first field allows you to set a certain structure’s abundance to 100%, and then track how this changes over time. Set the second field to 1% (this is just a display cutoff and a value I find useful). Set the third field to a low, but nonzero start time (the default is almost always fine). The fourth is the length of time to follow the conversion, measured in seconds. You may have to tweak this setting by running the program a few times. It can take a surprisingly long time for the MFE structure to dominate the population, if it ever does.

In this example, I will track an population of misfolded RNAs in structure 23 as it converts into more stable structures. A legend below the plot shows the which structures correspond to which lines: 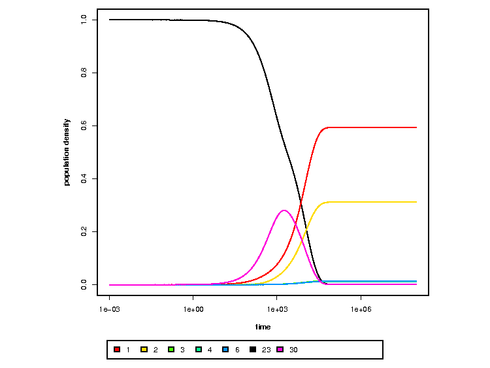 It takes a little under 100 seconds for the MFE structure appear at a level over 1%, a few hours for it to reach 50% abundance. No matter how long you observe it, though, the abundance of the MFE structure never rises far above 60%, and structure 2 never disappears. Why?

Look again at the tree diagram at the top. Structure 2 is the very stable suboptimal structure indicated by a green dot. It is almost identical in energy to the MFE structure. Barriers is telling us that the two structures exist in equilibrium, with a significant portion of the RNA population existing in the suboptimal structure.