On page 1 of the player puzzles, eight of the new puzzles have no shape icons. It seems to happen to my submissions about every six months. This time cynwulf, eteracac warren, wawan, Tesla, c-quence & I have had the same problem with the missing icon. I really wish this bug were repaired.

Second bug: The submit button sometimes hangs with the “submitting…” message continually flashing even although in another tab the puzzle has successfully been submitted.

Fifth bug: the delete buttons deletes the message but does not delete it in the Newsfeed list. Newsfeed often has duplicate feeds from players who have corrected a message with a spelling mistake and deleted the erroneous message. So you then have to read both to ascertain which one is the correct one.

Sixth bug: the “Go to Home” button in the Labs is really annoying as you have to go back two pages to get back into the Lab, this is very slow. There should be another button below, which should read “return to current sub lab list”. The way around this is to use the browser back button, but on my browser one click on the back button redirects you to the same page you were on, each time you click back it keep returning you to the same page. However if you click and hold on the back button you’ll get the history menu and if you go down to the 3rd link on the list it will correctly take you back to the sublabs list page by omitting the 2nd redirect link.

Seventh bug: The “@” button - it’s difficult to know what the point of this is. Or I should say I think I know what it’s for, i.e. it will alert the @username who hasn’t followed the puzzle’s comment page in the NEWSFEED, but most of the users seem to be putting their own name there. It’s also difficult to use the dropdown menu it produces, it doesn’t allow you to click on the names in the list you still have to type them, and its Tab button is funny, I’ve forgotten most of the other problems it has.

Eighth bug: On the Eterna certificate page the EteRNA logo is missing, it’s link is: https://dl.dropboxusercontent.com/u/16417427/eterna_artsource/logo.png
but it clearly is not on this location, so this link needs updating.

Ninth bug: the date function is present on player puzzle comments, but it’s missing on lab puzzle comments, Newsfeed info from Eterna, and Lab submissions. The Lab data sheet has 83 columns and not one of them has a date. It would be useful to know on what date I submitted my Lab puzzles.

Here’s my list of 18 puzzles with missing shape Icons:

Adobe Flash did a security update about January 10, 2017.  Could that be causing this to happen?

Strange that it coincides with the Jan. 10th flash update. Can you use a chrome browser on leopard?

The puzzle icon disappearing has happened lots of times before, I think it first appeared in early 2015 or even before. My Shockwave Flash was last successfully update in 2013, so the Jan Flash update is unrelated to the problem as the OS won’t instal it. I have already got Chrome on Leopard and it doesn’t Load Eterna, it give me the Eterna blue screen with a “Couldn’t load plug-in.” message. 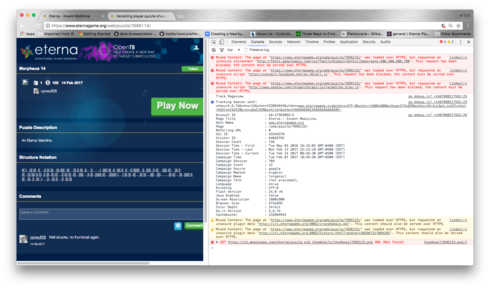 I duplicated the missing icon. It says it can’t find the puzzle thumbnail on the amazon server.  I went to the secure login site to get this.  Didn’t do it when I was using the non-secure website.  Maybe Omei or LFP6 can make sense of this?

I believe that happens if the player clicks the send button twice .   (: