Want to get started with 3D modeling?

In collaboration with other folks in the Rosetta community, my lab has put up a server which can do some 3D modeling of RNAs:

Please feel free to put in your favorite sequences or sub-motifs from your designs.

This is kind of a test run for an eventual combined 2D/3D interface to EteRNA, which we are beginning to think about (although we probably won’t get to it until after the “player project” experimental pipeline and gaming interfaces are released).

Please put comments here or in RosettaForums … and we’d be particularly interested if getting these 3D shapes helps inform your designs!

Needs me to create a login, is there a standard ‘eternaGuest’ Id or somethign similar ?

Might the be a way to pipe the output of the server directly into EteRNA?

Cool, thanks for showing us this. I’d definitely like to use these models to create/interpret designs. I’ve been tried to model the FMN-binding loop of our aptamers with this duplex, but it seems not to converge.

Looking at the scatterplot adn the structures, the cluster centers don’t really agree with one another. Aligned these in VMD with measure fit / move: 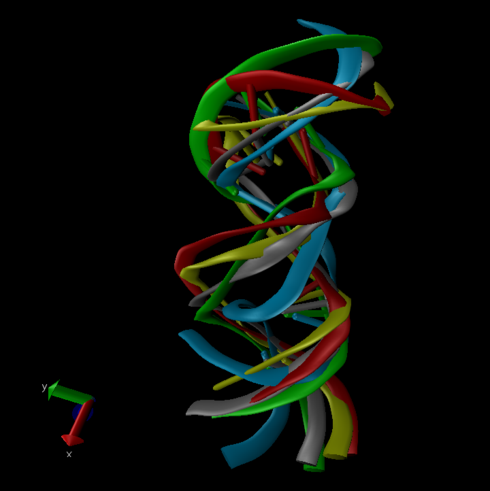 A job with more structures is currently running. If I’ve interpreted the results correctly, what might be the issue?

@Edward
It would help us if you made a login (registration is free!). We’re trying to get funding to really soup up the site and increase its computational power, and having more independent users will help us make a strong case.

@Quasispecies
Nice work and thanks for reporting. The modeling method doesn’t always reach atomic accuracy, especially for ‘motifs’ that involve noncanonical pairings above ~8 nucleotides. My lab is working on better methods for solving the 3D structures but they are much more computationally expensive (requiring ~100,000 CPU-hours per motif) and we can’t put them on a server. Also, here the RNA probably does not form a single structure until it binds to FMN, and we are not including FMN in the structure prediction – again, something that we are working on. All these problems are solvable, in my view, and when solved, we’re going to make those tools available eventually in Eterna 3.

I hadn’t really thought about Rosetta in quite some time, however, the modeling seems to be pretty accurate, as I ran a number of the sequences in this forum post.

I found it to be very cool that the sequences I ran through RNA denovo came back with a hexloop as a predicted structure, usually as one of the top 5 lowest energy states. Sometimes as the lowest predicted state.

Unfortunately, based on the FMN Switch 2.0 lab puzzle, I’m not sure if any of this can be used to “design” a sequence that works, as base 30 is locked as either an A or a G due to the locked aptamer bases, and the sequence of the tetraloop will always start with UCC, unless players decide to take the chance of weakening the stack of the 1st state’s multiloop with a UG pair. Nevertheless, Rosetta is awesome, and I may try to use it more often in the future

@brourd Pretty cool! Perhaps if you have a chance you could post pictures of some of the structures?

Here are pictures of some of the structures. I use 2 programs; Chimera from UCSF for 3D modeling, and the program Sequence to Structure to give me a nice little picture of the secondary structure.

All of these results can be viewed at Rosetta, for those who are interested in more.

I also changed the color of all the bases to match the game’s colors. 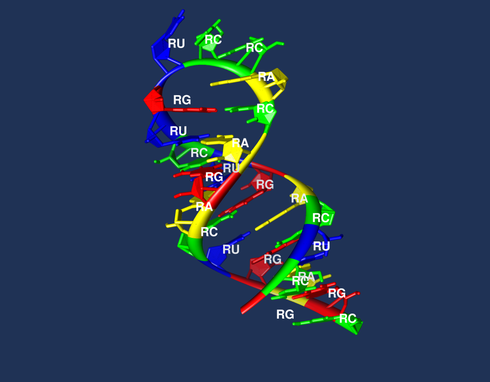 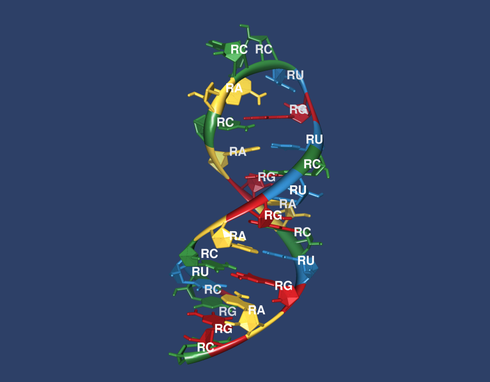 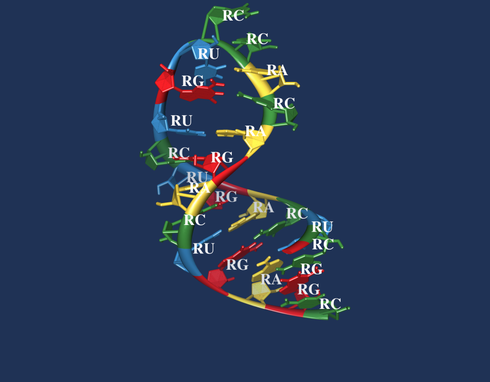 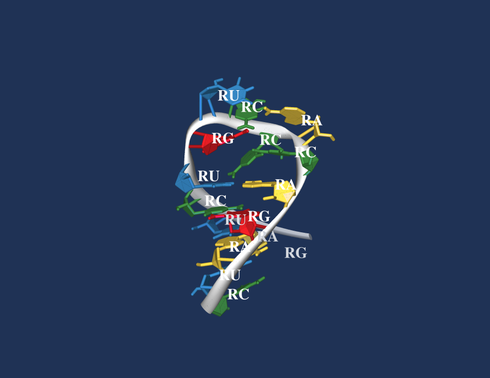 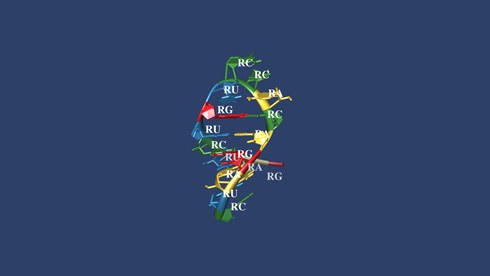 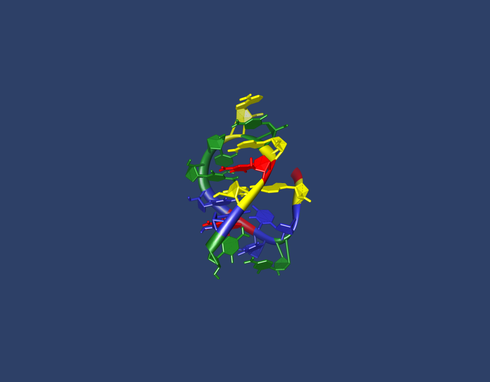 Brourd asked me to link to this topic…I made a separate post on RNA Composer, a 3D modeling server in Poland, or try them direct and compare–takes sequence only & sequence with dot/bracket secondary structure. Very easy to use.