What order are the molecules synthesized?

Would it matter the order that you synthesize the molecules as to how they fold? For instance, you may have a very strong bond at an end that might not otherwise find the connection if it was created last vs first. I am sure this would make a huge difference whether something fails or not. But I see no mention of it. I am curious if you synth in both directions. If not, would it make sense to mark the end in the game that is the starting end?

The RNA polymerase we use synthesizes in the same direction as in nature: 5’ to 3’. In the Lab, the 5’ end is the one that starts with two locked G’s. Also, the little arrows around each nucleotide point in the 5’ to 3’ direction. 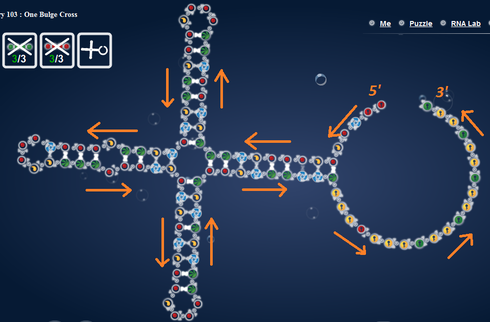 This directionality may have some influence on how your RNA folds. Because nucleotides are added one at a time, the ones they are most likely to form hydrogen bonds with are those nucleotides that are already in the strand (as opposed to free-floating nucleotides and other existing strands of RNA).

Although unlikely, it is possible that some early, incorrect pairings may persist after more nucleotides are added to the strand, especially if the RNA has a very high melting point.