When will the player project results come out?

Is there a timetable for the results of the player projects?

Good question – I’m shooting for end of March for initial data, but we may need to spend a bit of time troubleshooting. We will be testing DNAs sourced from several companies using different technologies, and multiple sequencing ‘readouts’. Developing the data analysis pipeline will also take time.

Part of the reason we asked for ~1000 player project designs so early (in Jan) is to find out (a) whether there was enthusiasm (and there is a lot!), and (b) to make sure these pilot runs include sequences that are really representative of player ideas. The hypotheses & sequences that we got back are fascinating and I personally want to know the answers – so this is a top priority for me!

We are making steady progress.

First, we got funding for EteRNA 2 from the Keck foundation – a huge relief.

Second, we purchased a next-gen sequencer, and we are literally installing it today and running stuff next week. It actually took 3 months for this machine (a Miseq) to arrive, due to huge demand – and that has been the major delay.

Third, we’ve figured out where to buy the DNA libraries and how to make the RNA.

Optimistically, I think we’ll have ‘player project’ data taken and analyzed by the beginning of May; but if we run into issues, we might have to troubleshoot and it will take longer, until June.

Separately, there is a lot of work that we need to do on the site to bring player projects to a wide audience. That is moving forward, but will require much input from you.

Good news – we have been able to use our new Miseq sequencer to get chemical mapping data – including our standard ‘SHAPE’ chemistry – in quantitative agreement with our traditional capillary electrophoresis sequencer. 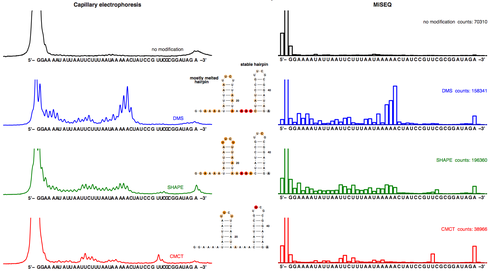 We are still pushing on two fronts.

First, the first company to synthesize a library of 1000s of EteRNA sequences produced too many errors. Part of the issue may be that the player projects were diverse – but of course we want that! We are testing two more companies now, who promise higher fidelity.

Second, the Miseq is excitingly fast but will not have the capacity to get high signal-to-noise on all player projects. There is another solution – the Hiseq – but those instruments have ~1 month turnaround times right now. [By the end of the year, those instruments will be ~10x faster however thanks to an anticipated upgrade in september.]

My hope is that we will have a low signal-to-noise ‘thumbnail’ of player projects by June, but high quality data will have to wait until the end of summer.

Overall, the scientific creativity of EteRNA players is pushing us to the bleeding edge of synthesis and sequencing technologies. Its kind of awesome – although we’re having to do a lot of troubleshooting and testing, as we get our protocols working we can expect a very rapid acceleration as the technologies are growing exponentially (faster than Moore’s law!).

This is excellent news. Great work!

Just to check that I understood you correct. You are saying that you got the first part of our new fancy equipment calibrated to give reliable data, so that we get the correct data on our player project in the long run.

I agree with Eli about the news.

Do you have an example of a "low signal-to-noise ‘thumbnail’ " ?
(A design from a past eterna lab round would be fine)

We’ve been able to make all the DNA templates for the player projects! We will need some more time to troubleshoot the RNA transcription and purification, and more time after that to get the chemical mapping data right.

The delays right now are due to a number of things, including other projects that are testing/advancing this technology as well as keeping the ‘normal’ EteRNA lab going. We’re still targeting end of summer (august) for the first round of player projects, but delays look like they might push this to fall. I know you want this data – we do too! – but we also want to make sure the data is correct.

Thanks for the update Rhiju

When I made the comment above, I had indeed made all the DNA templates. But I had also made a bunch of other crap mixed in. The sequences we ordered were not very pure, and our method for adding special ‘adapter’ sequences produced something complex. The dominant sequences in the mix were weird snippets and random mashups of the player designs. Luckily this is now fixed – but it took some effort!

I’m going to continue making updates about eterna player projects on the developer’s blog, starting with some exciting news. Check it out here: